Book Review with additional comments about 'The Kolbrin', by Greg Jenner 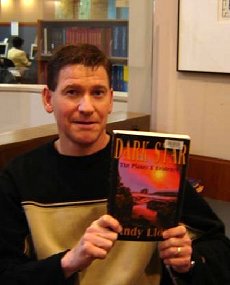 I have to say reading Andy Lloyd’s book Dark Star The Planet X Evidence was like taking an exhilarating breath of fresh air! Jam-packed full of facts and insightful wisdom Andy’s ground breaking work boldly steps into the public arena demonstrating that our solar system has a binary companion. A must have for any private or public library, Andy Lloyd carefully lays out, in a comprehensive yet easy to read format, historical and scientific evidence supporting the existence of not only the Dark Star but also Planet X itself – two distinctly different objects.

"Dark Star: The Planet X Evidence" will no doubt raise a few eyebrows within the scientific community and stir up controversy. That being said any open-minded astronomer who is prepared to read Andy’s work will see that his proposition is well grounded and solidly backed with facts.

As a fellow Dark Star research colleague, it was an honour and privilege having had the opportunity to contribute to Andy’s book. Over the years we’ve exchanged information and theories fighting the cause and although our interpretations of the data have varied somewhat from time-to-time we both generally agree that we are dealing with two large celestial bodies out there. The Dark Star (Marduk) and Planet X (Nibiru). In connection with this Andy Lloyd states the following:

“What I am proposing is that the observed planet Nibiru is the outermost planet of the Dark Star system. And apart from it; a reddish terrestrial planet that brightens with a cometary aura when moving amongst our sun’s family of familiar planets. Nibiru itself is a massive comet the size of a planet, much as Sitchin initially suggested.”

“…It is a barren outpost of the Dark Star planetary system. It appears in the sky merely as a sign that the Dark Star MARDUK has once again arrived at perihelion, and for this reason the word Nibiru became one of Marduk’s 50 names.”

“Nibiru [Planet X] is a celestial ‘ferry’, moving across the cosmic darkness, to the hidden Dark Star. Pages 176-177.

My investigation into the Dark Star/Planet X matter is however a bit more ‘radical’ than that of Andy’s conservative approach used in his book. As far as the celestial mechanics go, Andy postulates the next Nibiru/Planet X fly-by will occur well out beyond the orbit of Jupiter. However, my interpretation indicates the next Nibiru fly-by will be much closer in toward the Sun—through Earth’s orbital vicinity. Yes, as it turns out, Nibiru has caused most of the widespread devastation to Earth of late. This radical scenario of mine stems from perusing through countless esoteric books and ancient documents.

Just recently one such manuscript was brought to my attention. Entitled the Kolbrin Bible, it goes back at least to the twelfth century and was housed in Glastonbury Abbey. Apparently this ancient manuscript has been closely guarded within private Masonic families for quite some time and I can see why. I believe the Kolbrin bible contains startling passages that describe none other than the fly-by of Nibiru itself.

From the ‘Book of Creation,’ Chapter Three.

“…It is known and the story comes down from ancient times that there was not one creation but two. A creation and a recreation. It is a fact known to the wise [Alchemists or the Magi?—GJ] that the Earth was utterly destroyed once then reborn on a second wheel of creation. At the time of the great destruction of Earth God caused a [celestial] dragon from outer heaven to come and encompass her about. The dragon was frightful to behold, it lashed its tail and breathed out fire and hot coals and a great catastrophe was inflicted upon mankind. The body of the dragon [Nibiru/Planet X] was wreathed in a cold bright light and beneath on the belly was a ruddy hued glow while behind it trailed a flowing tail of smoke.

"It spewed out cinders and hot stones and its breath was fowl and stenchful poisoning the nostrils of men. Its passage caused great thunderings and lightnings to rend the thick darkened sky, all heaven and Earth being made hot. The seas were loosened from their cradles and rose up pouring across the land. There was an awful shrilling trumpeting which outpoured even the howling of the unleashed winds. Men stricken with terror went mad at the awful sight in the heavens. They were loosed from their senses and dashed about crazed not knowing what they did. The breath was sucked from their bodies and they were burned with a strange ash. Then it passed leaving Earth enwrapped with a dark and glowering mantle which was ruddily lit up inside. The bowels of the Earth were torn open and great writhing upheavals and a howling whirlwind rent the mountains apart. The wrath of the sky monster [Nibiru] was loosed in the heavens. It lashed about in flaming fury roaring like a thousand thunders. It poured down fiery destruction amid a welter of THICK BLACK BLOOD [Red ash].

"So awesome was the fearfully aspected thing that the memory mercifully departed from Man. His thoughts were smothered under a cloud of forgetfulness…..in this manner the first Earth [Tiamat] was destroyed by calamity descending from the skies. Men and their dwelling places were gone. Only sky boulders and the red earth remained where once they were. But amidst all the desolation a few survived for Man is not easily destroyed but crept out of their caves and came down the mountain sides. Their eyes were wild and their limbs trembled. Their bodies shook and their calls lacked control. Their faces were twisted and their skin hung loose on their bones. They were as maddened as wild beasts driven into an enclosure before flames. They knew no law being deprived of all the wisdom they once had and those who had guided them were gone…”

The Kolbrin Bible goes on to give us a warning of the red comet/planet’s return, named the Destroyer:

“When blood [the red ash] drops upon the Earth the DESTROYER [Nibiru] will appear and mountains will open up and belch forth fire and ashes. Trees will be destroyed and all living things engulfed. Waters will be swallowed up by the land and the seas will boil. The heavens will burn brightly and redly. There will be a copper hue over the face of the land followed by a day of darkness. A new moon [one of the satellites of Nibiru] will appear and break up and fall. The people will scatter in madness. They will hear the trumpet and the battle cry of the DESTORYER and will seek refuge in the dens [underground bunkers] of the Earth. Terror will eat away their hearts and their courage will flow from them like water from a broken pitcher. They will be eaten up in the flames of wrath and consumed by the breath of the DESTROYER. In those days men will have the great book before them, wisdom will be revealed. The few will be gathered for the stand. It is the hour of trial. The dauntless ones will survive. The stout-hearted will not go down in destruction…”

With passages like these I tend to put much weight in what the text has to say—a planetary encounter. Yes, I realize ancient manuscripts have certain built-in biases and exaggerations dependent upon the point of view of the author but at the same time you simply cannot just throw a precious document like this out with the bath water. Therefore it is reasonable to suggest the Destroyer mentioned in the Kolbrin, is in fact Nibiru, the celestial Sky Monster accompanied with a red meandering comet-like serpentine tail.

This dovetails the symbolic trinity associated with ancient Sumerian tablets that I believe portrays Sol, Marduk, and Nibiru (with its comet-like serpentine tail).

This also is in keeping with the original Avebury layout as well. See below: 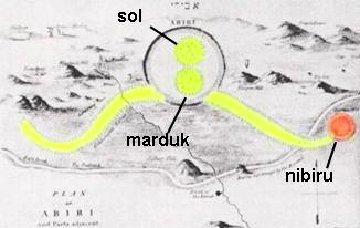 In closing, I leave you with one last passage from Andy Lloyd's fascinating work, "Dark Star: The Planet X Evidence". A book destined to become a favorite of mine and no doubt highly recommended from yours truly.

“As odd as it may seem, the often stiff upper-lipped Victorians and Edwardians were far more open-minded about…our solar system than we. We live in an age of high technology, space exploration and global communication, these are great, if not monumental achievements in the history of our species, but what has been lost recently is the speculative form of science that the Victorians indulged in when considering such things….” Page 10.