Lost Civilizations & Secrets of the Past 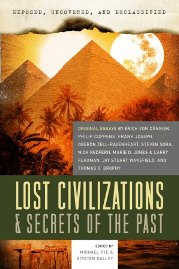 This compendium of essays kicks off with excellent articles by Frank Joseph and Oberon Zell. The first sets the scene for the whole book by examining strong evidence ignored by mainstream archaeology indicating that the Americas were visited many times by diverse cultures down the ages.  Norsemen, even Sumerians, appear to have left their stamp on the continent, leaving us physical evidence that simply does not fit into the mainstream box.  Archaeologists exert their intellectual energy on reshaping these round pegs into square ones:

"...the same shop-worn - indeed, obsolete and even erroneous - official version of antiquity is repeated unchanged despite all facts to the contrary.  Promulgated for more than 100 years, even up to the present day, by America's educational system, print media editors, and television programmers, this version is accepted by most Americans, who are still kept in the dark regarding the Magna Fuente bowl, the Pokotia Monolith, and the Sumerian tablets." (p20)

Joseph traces this stubborn clinging to orthodoxy to the influential John Wesley Powell and his dislike of Mormon claims that America had been colonised by Near East immigrants 4000 years ago.  I would have liked to see more written here about cultural diffusion from across the Pacific, where Mayan and Aztec cultures are tied in closely with those of Indonesia and the Indian sub-continent.  Nevertheless, this first essay set the tone well.

It was followed by Oberon Zell's analysis of the Flood, and the various events that it might have been associated with, like the inundation of the Black Sea.  He provides a grim selection of catastrophic events which highlight our planet's fragility, and out civilisation's own vulnerability.  He also created fascinating maps comparing coastlines pre- and post-Ice Age, showing how coastal Ice Age settlements would now be underwater and covered in many tons of accumulated silt.

Philip Coppens describes how Druidic knowledge survived the Roman invasions of north west Europe in Scandinavia. He claims that the Vikings understood the meaning of the ancient megalithic sites better than Britons and Gauls when the Norsemen swept through the same territories centuries later.  Coppens highlights the work of Marcel Mestdagh, who demonstrated the central importance of the French town of Sens to the network of megalithic sites.  This innocuous town is apparently the epicentre of several concentric rings of monuments and ancient sites stretched across France, possibly in the form of immense circular canals.  Is this equivalent to Atlantis? Coppens asks, quite seriously.

Readers of my novel "The Followers of Horus" will like Freddy Silva's essay on ancient sites across the globe, built to aid the transformation of an individual into a god.  It's rare to read about the FoH anywhere, to be honest, so this was an unexpected treat. Freemasons are the modern Followers of Horus, he claims - not unreasonably.

Many will be startled by the amount of evidence suggesting atomic explosions took place in ancient India!  Micah Hanks sifts through the scriptural, mythological and, yes, physical evidence which suggests this may have been a reality, specifically in the area of Mohenjo-Daro:

"If we once again consider the possibility that someone had nuclear capabilities here on Earth long ago, perhaps it comes as no surprise that the best evidence we have for their existence is measurable level (sic) of radiation at those proposed nuclear blast sites, which remain even in the present day." (p127)

These enquiries seem like the kinds of things which would trigger interest in military circles, and Nick Redfern provides us with a wealth of FOIA data indicating that the US government has indeed shown great interest in a large variety of ancient mysteries, including UFO power grids, ancient accounts of levitation, crashed UFOs in ancient times, and powerful entities like the Djinn.

More mysteries emerge with Pat Chouinard's examination of the textual and physical evidence for giants living among people in ancient times.  Again, there is a lot of suggestive evidence of tribes of anomalously tall folk across the globe.  Perhaps these are connected with the Nephilim of the Bible, described by several of the authors?  Paul von Ward's essay on alien intervention in our evolution is nothing short of superb.  In a well constructed argument, he charts how religions emerged from direct contact with Advanced Beings among a fledgling humanity, into a priestly hierarchy growing in power in the AB colonists' absence, to a conversion to the supernatural religions of today.

Unexpected colonists of a more earthly nature are discussed by Steven Sora, who shows how the Picts of Scotland are closely associated in a number of ways with the MicMac tribes of the North American eastern seaboard.  His argument is a compelling one, and included cases of people fitting the description of North American Indians washing up on the shores of Europe in pre-Columbian times. This article tied back nicely to the cultural diffusion arguments made by Frank Joseph, and was yet another highlight in this well-edited and fascinating book.

Lost Civilizations & Secrets of the Past

Lost Civilizations & Secrets Of The Past