It's an amazing claim, but it's absolutely true! One of the characters in my new book, Ezekiel One, has literally come to life!

The book, like all science fiction, proposes a future series of outcomes.  Strangely, one of those outcomes has already come true.  One of the characters in the book is a Russian oligarch, named Mr Provotkin. He lives in London, and owns the city's newspaper, the 'Daily Standard'.

It was a bold contention on my part to make the owner of a prestigious London newspaper a Russian, but it tied in with certain threads of the plot. The fictitious Mr Provotkin is obsessive with security, and involved in breaking open the NASA conspiracy about "Ezekiel One".  I wrote 'Ezekiel One' in January - March 2008 and it has just been published.  Here's a relevant extract from my book:

Bill had never actually met Mr Provotkin, not even at one of London’s more exclusive restaurants. The billionaire Russian had owned the Daily Standard since 2010, a takeover which had proven highly controversial at the time.  But eventually the fuss his buyout of the capital’s newspaper had provoked had died out in the corridors of Westminster, and the national media had moved on to other stories.

After all, Mr Provotkin was now a British citizen, and had lived in London for a decade.  More importantly, he was bitterly disliked by the Kremlin on account of his own pro-democracy attitude towards politics in the Motherland.  Given the fate of many of his ex-pat comrades, he was constantly on his guard, and maintained a permanent contingent of private security officers at his various residences.  One or two of them were rumoured to have once worked for the British Special Forces in Iraq.

In mid January 2009, news broke that a real Russian oligarch living in London, Alexander Lebedev, was in advanced talks to buy the London 'Evening Standard', the real-life title that my fictional paper is based upon.  Furthermore, Lebedev is an ex-KGB foreign intelligence agent.  Mr Lebedev then controversially took control of the newspaper on 21st January. 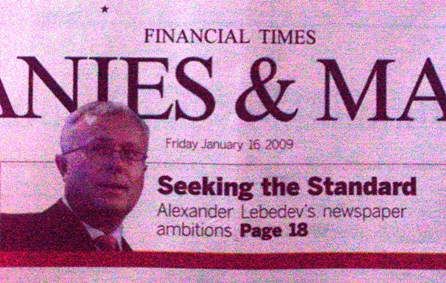 It's an incredible coincidence.  Was this some kind of unconscious prophecy on my part? What's weirder is that the title of the book itself is based upon a verse of Old Testament prophecy.  So, what else in the book might come true? There's plenty in it about Planet X and 2012 after all. (1)

Here's how the Independent on Sunday reported this story, in the media page of their business section:

"Spooky.  A novelist has written a thriller in which a Russian billionaire buys a London newspaper, but he wrote it more than a year ago.  The hero of Andy Lloyd's 'Ezekiel One' is a journalist at the Daily Standard which is bought by oligarch Mr Provotkin.  "I couldn't believe it when I read about Alexander Lebedev buying the 'Evening Standard'," Lloyd tells me, "My book is about government and media conspiracies and I wanted to have  the powerful characters interconnected.  Provotkin knows a lot more than you would think."  As ex-KGB agents, perhaps, tend to."  (2) 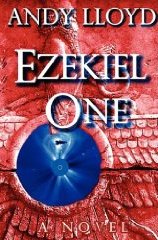 A Russian and an American satellite have been in a mid-space collision, scattering debris across the paths of any number of other orbiting bodies, including the International Space Station.

It appears, on the face of it, to have been a low probability accident. But it's also odd that there was no warning of this issued by NORAD, which monitors the movement of all objects in orbit around the Earth.  On previous occasions when there have been near-misses, such warnings have been issued:

Is something else going on here? After reading the following extract from my new book 'Ezekiel One', you may agree. The scene takes place in the office of an academic astronomer at Oxford University, named Dr Clarke. He's speaking with investigative journalist Bill Bainbridge, who it trying to break the secrecy surrounding the mysterious 'Ezekiel One':

“The astronomer sat back, and swung around in his chair to face Bill. “You know, this is so weird. Someone else out there must have spotted this anomaly.”

“But the satellite doesn’t appear on the official NORAD website, so how would anyone know how to track it?”

“I’m talking about astronomers like me, who build up our own map of the sky independently of NORAD and other official agencies. There are colleagues out there who make a bit of a hobby of watching the super-secret satellites up there. In case one of them, say, disappears, or falls out of its usual orbit.”

“Oh, yes.” Dr Clarke laughed gently, “Now I’m the one who sounds like a conspiracy nut! Look, the Yanks have put up all sorts of hardware into space. So have the Russians, and the Europeans, and even the Chinese. There are spy platforms. Recently, there has been the emergence of a new class of satellites, what you might term killer satellites. They’re capable of moving around using their own propulsion systems.

“Every so often, they go on a hunt. For instance, let’s say a foreign power puts up a satellite that hangs over a sensitive military establishment in the United States The Americans might then take it upon themselves to dislodge it from its normally stable orbit into a decaying one. All they have to do is give it a little nudge with one of their killer satellites, either by direct collision or through the use of a particle beam.

“It’s likely that the other space powers do the same: Tit for Tat. It’s like the old Cold War, only no one knows about it. It’s beyond most people’s frame of reference, unless a civilian satellite gets accidentally taken out. Or one of these decaying satellites makes it through the atmosphere and crashes to Earth. When that happens the authorities blame a bad solar storm, or say that the satellite has decayed naturally into an unstable orbit and is going to fall to Earth. What very few people realise is that the satellite has actually been attacked by a foreign power.”

“Well, officially it doesn’t happen, of course. America controls the waves up there. They are very interested in building up space-based anti-ballistic missile defences as a shield against nuclear attack. They’re not about to publicise their work. It might compromise their eventual goal of a shielded American continent. The Chinese and the Russians have been working on the same idea. If one of your own satellites gets hit you aren’t going to tell the world that it was taken out by the other side, are you? It might expose your own activities up there, which are generally in contravention of various UN treaties.”

“Listening to you, it’s almost as if there’s a war going on up there!” Bill was astonished.

“Well, I wouldn’t want to over-dramatize it. It’s more like the defence of territory, or creating protective borders in space above the Earth. There are satellites whizzing around all over the place. But if you stick a spy satellite in a geo-stationary orbit about sensitive military sites, it’s going to provoke a response, isn’t it?”