Nibiru Holds The Key to the Bottomless Pit 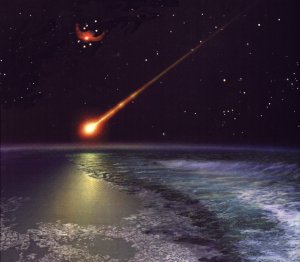 HOLES IN THE POLES?

In the early part of the 1900’s the German Vril and Thule societies believed the in the existence of two polar holes or ‘bottomless pits’ that descended deep within the Earth’s crust. Well, startling new evidence has emerged recently shedding light on the fact that these two societies may have been right all along. I would like to draw your attention to the following webpage: Aurora Australis Marks the Southern Orifice with the following link:

Dean Delucia, webmaster of www.holloworbs.com and his fellow colleagues have provided some amazing NASA photos recently of the Antarctic Aurora Borealis emanating outward and shooting up through what looks like a dark-grey circular opening near the south pole. Quite extraordinary, I must say. 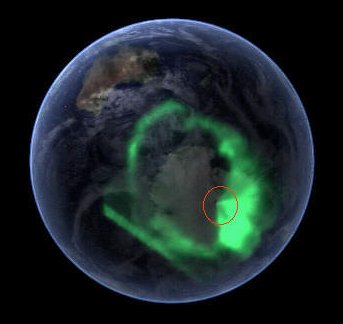 Dean writes, “…these NASA images demonstrate that the aurorae originate from within the Earth, that they are expressed through the polar orifices, and the images pinpoint the location of the Southern polar orifice, for all time…” Now for everyone to see. Dean has also provided a RADARSAT image of the Antarctic area in question. See below: 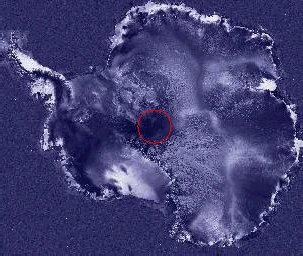 Numerous reports from polar explorers also tell of ‘upward auroral events.’ One eye-witness account comes from the: ‘Handbook of Unusual Natural Phenomena – Eyewitness Accounts of Nature’s greatest Mysteries’ by William R. Corliss ©1977 reprinted in 1983. What’s most interesting here is the fact that the aurora was audible. This makes sense given the intensity of the upward burst. The article states:

“…The following is my own personal experience which convinced me that the aurora borealis was actually audible. In the winter of 1925-1926 I was engaged in making a drive…across the mountain range bordering the Arctic coast north of Cape Prince of Wales on Bering Strait. One night during this drive found me traveling by starlight across the divide at the head of Nuluk River…As we climbed with our dog team to the summit of the divide, we were both spellbound and astounded by the magnificent display of aurora, the most wonderful display I have ever witnessed during my eight years of life among the Eskimos.” 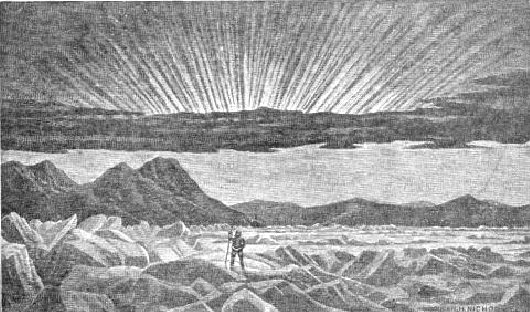 “GREAT BEAMS OF LIGHT SHOT UP FROM THE NORTHERN HORIZON AS IF A BATTERY OF GIGANTIC SEARCHLIGHTS WERE SEARCHING THE ARCTIC LANDSCAPE.  In front of these beams and throughout the whole length of the northern horizon, great waves of iridescent light traveled from west to east like gigantic draperies before the stage of nature’s amphitheater. Great folds or waves, ever changing in color, traveled one after another across the horizon, and from behind them streamed the powerful beams of white light. These beams of light could be seen passing directly over our heads, and when one chanced to come over the divide, it appeared to be not more than a hundred feet above the surface. The spectacle was so awe-inspiring that the dog team was stopped, and I sat upon the sled for more than an hour absorbing the marvelous beauty of this most unusual display.

"As we sat upon the sled and the great beams passed directly over our heads, they emitted a distinctly audible sound which resembled the crackling of steam escaping from a small jet. Possibly the sound would bear a closer resemblance to the crackling sound produced by spraying fine jets of water on a very hot surface of metal. EACH STREAMER OR BEAM OF LIGHT PASSED OVERHEAD WITH A RATHER ACCURATE UNIFORMITY OF DURATION. By count it was estimated to require six to eight seconds for a projected beam to pass, while the continuous beam would often emit the sound for a minute or more. This particular display was so brilliant that traces could easily be seen long after daylight” (Science, 78: 213-14, 1933). Pages 369-370.

“…Despite all our modern research with spacecraft and instrumented rockets, the auroras have not yielded up all their mysteries—not even the “normal” auroras. Auroras are loosely associated with solar activity and geomagnetic storms, so we know that the gusts of electrically charged particles emitted by the sun…help in some way to “set fire” to the polar heavens. Beyond these generalities, THERE IS MUCH WE DO NOT UNDERSTAND. In particular, the anomalous or abnormal auroras reveal even deeper layers of IGNORANCE about one of nature’s most spectacular manifestations.” Pages 2-3

Anomalies researcher William R. Corliss is correct. There is much we do not understand when it comes to the origin of polar aurora activity. According to the most recent NASA images I tend to agree with Dean Delucia stressing that the sun’s solar radiation interacts deep within the Earth’s magnetic field and, at times, wells up through the polar holes whilst adhering to the planet’s magnetic lines. Only at this point can the ionized particles be charged from the sun’s solar wind to form the Aurora Borealis. Planet Earth’s release-valve mechanism, if you will. 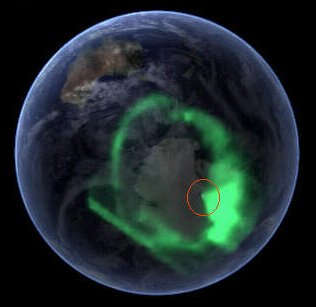 Why am I banging on about this? Well, again the German Vril and Thule societies not only believed in the existence of bottomless pits, they believed in the existence of a subterranean race living deep within them. Based on my investigation there’s a direct correlation between Planet X (Nibiru) and the subterranean dwellers. Yes that’s right, the trigger for the inner-earth terrestrials to emerge out of the bottomless pits and interact with us will be the arrival of the Dark Star system—particularly Planet X. This is the very planet that will brush by us and tilt the Earth. (See ‘Nibiru and the Subterranean Connection Part One.’) So, in other words, the ‘key’ for all this to happen will be in the form of a pole shift brought about by Nibiru.

“A great epoch approaches. The ‘Ruler [King] of the World’ is ready to fight. Many things are being manifested. The COSMIC FIRE [The Dark Star’s entourage] is again approaching the earth. The planets are manifesting the new era…again humanity will be tested…if all good forces do not combine their power, the greatest cataclysms are inevitable.” Source: Shambhala ©1930, by Nicholas Roerich. Page 12.

In 1921, Lama Hutuktu of Narabanchi related the following prophecy (from 1890) to explorer Ferdinand Ossendowski. This prophecy was uttered from the Agarthian ‘King of the world’ himself:

“More and more the people will forget their souls and care about their bodies. The greatest sin and corruption will reign on this earth. People will become as ferocious animals, thirsting for the blood and death of their brothers. THE 'CRESCENT' [OF THE MOON] WILL GROW DIM and its followers will descend into beggary and ceaseless war. Its conquerors will be STRICKEN BY THE SUN but will not progress upward and twice they will be visited with the heaviest misfortune, which will end in insult before the eye of the other peoples. The crowns of kings, great and small, will fall...one, two, three, four, five, six, seven, eight....There will be a terrible battle among all the peoples. The seas will become red...the earth and the bottom of the seas will be strewn with bones...kingdoms will be scattered...whole peoples will die...hunger, disease, crimes unknown to the law, never before seen in the world.”

“The enemies of God and of the Divine Spirit in man will come. Those who take the hand of another shall also perish. The forgotten and pursued shall rise and hold the attention of the whole world. There will be fogs and storms. Bare mountains shall suddenly be covered with forests. Earthquakes will come...Millions will change the fetters of slavery and humiliation for hunger, disease and death. The ancient roads will be covered with crowds wandering from one place to another. The greatest and most beautiful cities shall perish in fire...one, two, three...Father shall rise against son, brother against brother and mother against daughter....Vice, crime and the destruction of body and soul shall follow....Families shall be scattered....Truth and love shall disappear.....From ten thousand men one shall remain; he shall be nude and mad and without force and the knowledge to build him a house and find his food....He will howl as the raging wolf, devour dead bodies, bite his own flesh and challenge God to fight....All the earth will be emptied. God will turn away from it and over it there will be only night and death.”

“THEN I SHALL SEND A PEOPLE, NOW UNKNOWN, which shall tear out the weeds of madness and vice with a strong hand and will lead those who still remain faithful to the spirit of man in the fight against Evil. They will found a new life on the earth purified by the death of nations. In the fiftieth year only three great kingdoms will appear, which will exist happily seventy-one years. Afterwards there will be eighteen years of war and destruction. THEN THE PEOPLES OF AGHARTI WILL COME UP FROM THEIR SUBTERRANEAN CAVERNS TO THE SURFACE OF THE EARTH.” Source: Beasts, Men and Gods ©1922, by Ferdinand Ossendowski. Pages 224 & 225.

Could the Bible be describing this ‘uprising’ from one of the polar openings? I say yes! See below:

“Then the fifth angel blew his trumpet. And I saw a [Red] star fall from the sky to the earth. THE STAR WAS GIVEN THE KEY TO THE DEEP [POLAR] HOLE THAT LEADS DOWN TO THE BOTTOMLESS PIT. THEN IT OPENED THE BOTTOMLESS PIT. Smoke came up from the [polar] hole like smoke from a big furnace. The sun and sky became dark because of smoke from the [polar] hole. Then locusts [strange looking subterranean people] came to the earth [from the bottomless pit] out of the smoke. They were given the power to sting like scorpions. [Using baton-like Vril rods. Read ‘Vril The Power of the Coming Race,’ by Sir Edward Bulwer-Lytton ©1871—GJ] They were told not to harm the grass on the earth or any plant or tree. They could only harm [sting or stun using Vril rods] the people [on top of the Earth] who did not have the sign of God on their foreheads. These locusts [race] were given the power to cause pain to the people for five months. [This is how long the physical effects from the Vril rods would linger before wearing off] But they were not given the power to kill anyone. And the pain they felt was like the pain that of the scorpion gives when it stings a person. During those days people will look for a way to die, but they will not find it. They will want to die, but death will run away from them. The locusts looked like horses prepared for battle. On their heads they wore things that looked like crowns of gold. THEIR FACES LOOKED LIKE HUMAN FACES. THEIR HAIR WAS LIKE WOMEN’S HAIR AND THEIR TEETH WERE LIKE LIONS TEETH. The sound of their wings made was like the noise of many horses and chariots hurrying into battle. The locust…[Race] had a King who was the angel of the bottomless pit. [‘King of the World’ that resides in Agharti] His name in the Hebrew language is Abaddon. In the Greek language his name is Apollyon. The first great trouble is past.”  Source: Revelation 9 verse: 1 to 12.

The Revelations painting shown above symbolises a holy-man lying within the Earth’s crust. Some say the figure is Enoch, others tell me he is Saint John. Regardless who he is, a second star-like object is clearly depicted above his head at the far right. My interpretation of the painting tells me the holy-man knew the secrets of inner-earth. I argue he also knew that the second star holds the “key” to the deep polar orifice that leads down the bottomless pit. Yes, the second star-like object appearing so close to Earth is none other than Planet X, the red orb known as Nibiru.

This intriguing image was sent to Andy Lloyd by Thomas Tipton of Ohio.  He was looking over his World Wind software some months ago when he came across a similar 'hole' in the Arctic Ocean: 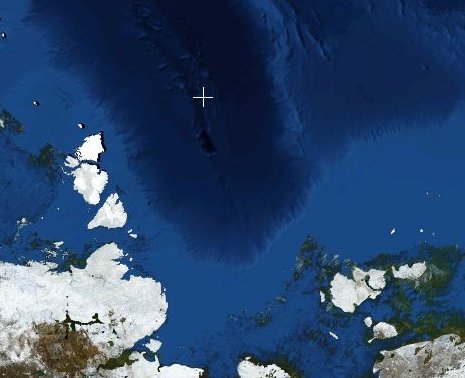 Nibiru and the 'Great Pyramid' Connection