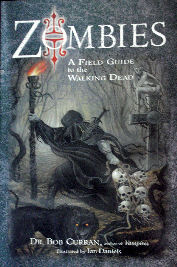 Do zombies really exist?  Where we might realistically consider going on a serious ghost-hunt, do we need a field guide to find the living dead, animated corpses, or zombies who eat human flesh?  The title of the book is perhaps a little deceptive, in that the text of the book is more of an examination of the place that the walking dead have in culture, media, myth and comparative religion, both ancient, and modern.  But this is not a dry academic paper, either.  The book is levelled at a general readership, and is full of the kind of illustrations, by Ian Daniels, that one might associate with a handbook on 'Dungeons and Dragons'.

Bob Curran starts the book with a tale or two from his childhood in rural Ireland.  Local superstitions about the living dead pervaded the culture he was brought up in, and the book he writes seems to look at the question of whether there is any real substance to such beliefs.  Naturally, the belief in the living dead goes back as far as human culture itself, and is widespread throughout the world, as the author demonstrates thoroughly.  From Haiti to the Himalayas, people have always believed that the dead might return from the grave in physical form. Even in our age of rationalism, such beliefs are still held here and there, or have evolved into popular festivals and holy days, marking the living beliefs of a set of superstitions that perhaps should also be cold in the ground by now.

There are many surprises in store for the reader of 'Zombies'. Dr Curran ties the belief in the living dead to the evolving belief in resurrection down the ages, from Mesopotamian culture, through the pagan Dying and Rising gods, and into the Bible, both Old and New Testaments.  Was Lazarus a zombie? is a question we are let to consider, for instance. The mediaeval Church seems to have promoted the idea of the dead rising from their graves, as part of their efforts to win the local pagan populace over to Christianity. The popularity of Halloween and the Mexican Day of the Dead show how far the modern Church has to go if it wishes to properly eradicate the ancient belief systems of the common folk.

More fascinating, and gruesome, are the accounts of grave-robbing in the British Isles in the 18th and 19th centuries.  These ghoulish activities fed a need in esteemed schools of surgery for fresh cadavers for lectures on human anatomy.  It's not strictly about the living dead, but this section of the book provides a cultural background to Western beliefs about the dead being removed from graves (that's if they weren't murdered to provide course material for the next day's anatomy lecture). 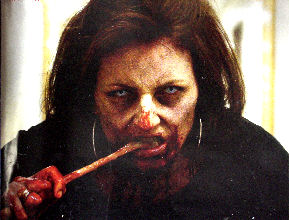 In America around the same time, grave-robbing provided corpses for black magic rituals, and Bob Curran explores in depth the beliefs of slaves in the Caribbean in Voodoo, and how the idea of zombies may have emerged from that sub-culture.  It is a fascinating study, which feeds into books written by eccentric Westerners, like William Seagrave, about these beliefs, which in turn led to the first zombie movies.  Today, we are entertained by flesh-eating zombie flicks which probably bear little real resemblance to the culture from which they originally emerged. In truth, Zombification was likely to have been a nefarious means of controlling the living through the use of neurotoxins, as in the bizarre case of Claudius Narcisse  (is this where the modern medical term 'narcolepsy' comes from?). This journey of discovery is worth reading this book for, alone.  But there is more, as Dr Curran takes us to the Far East, and looks at the living dead of Japan, where ascetics carefully, ritually starved themselves to death to become a holy bag of bones.

Packed full of fascinating material, I would recommend this book to any fan of the supernatural, or student of the evolution of superstitious beliefs in various cultures.  Readers are likely to be disappointed by the number of typos in the book, however; Dr Curran appears to have relied rather too heavily on the automated proof-reading computer packages, resulting in the wrong words cropping up in the text all over the place.  Sadly, this is all too common with modern authorship; it is not just Dr Bob!

As a final point, I'd like to congratulate the illustrator, Ian Daniels, on a job well done.  His drawings are detailed, and entertaining, and sometimes  a little bit saucy.  Well, if you're going to be assaulted by a zombie, it might as well be a pretty one...