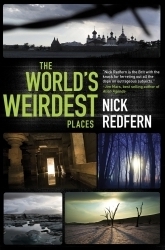 Nick Redfern explores the realms of the paranormal, covering a selection of locations across the globe. Some are well known, some are highly unusual choices.  All of them have in common the distinction of being "steeped in strangeness of more than just one nature".  One might say they are poly-paranormal in character.  Redfern indicates that such sites are known in paranormal circles as "window areas".  It is a curious thing indeed that seemingly innocuous locations can host such a diversity of phenomena as ghosts, Bigfoot, UFOs, black panthers, supernatural monsters and a general sense of nefarious malevolence.

In this well-researched book, the locations are set out in alphabetical order.  This makes the book easy to reference, but it does make the flow of the chapters somewhat random in character.  Each chapter is about 6-8 pages long, and given the number of paranormal elements covered for each location, the stories therein are necessarily concise.  This provides a fast pace for the general reader, allowing a lot of ground to be covered as the book probes the various sites of interest around the world.  Anyone hoping to get into the nitty-gritty of each tale might face disappointment, but even the shortest tales are told well enough, with Redfern's characteristic wit and narrative skill.

On occasion, the author takes delight in describing paranormal activity that is eclipsed by the most famous character of a given area.  For instance, his chapter on Roswell quickly skates through the infamous UFO incident to settle upon the activities of ghost aliens in the town's NMRC building.  Dead aliens equals the ghosts of dead aliens in this location, it would appear, and the author recants the tale of a bizarre séance that he attended a few years back as part of the filming of a Discovery Channel documentary.  The results of the séance were remarkable enough - and caught on film, no less - yet strangely this program never made it onto the television schedules.  Perhaps the Discovery Channel was put off when their hoped-for entertainment value was corrupted by hard evidence?  A similar thing has happened to my own ghost-hunting team, so I can relate to Redfern's disappointment at being let down in this way.  It's a shame - I'd have loved to see that show.

A couple of the locations covered in the book allude to a link between paranormal activity and the occult.  Aleister Crowley is connected to both Loch Ness in Scotland, and Devil's Gate Dam in Pasadena, both of which have seen their fair share of bizarre activities.  Do some of these locations owe their spookiness to portals opened by agents of the Occult?   The abandoned city of Bhangarh is alleged to have been cursed by a skilled adept of black magic, Singhia Sevra, and some say that it was his curse that led to the exodus of its entire population in the late 18th century, never to return.  Another famous occultist based in the Himalayan region is linked with manifestations of weirdness all the way over in America, upon Mount Shasta:  The famous founder of Theosophy, Madame Blavatsky, claimed to have discovered ancient books linking the 15,000 foot mountain in California with the ancient, refugee denizens of lost Lemuria.  As Redfern says: "Truly, the story is a swirling cauldron of deep strangeness."  (p128)

The Kremlin in Moscow is certainly not short of links to the paranormal, both in terms of ghosts and also numerous UFO reports.  There have been enough dark characters associated with that centre of Russian power down the centuries to also draw a tentative link, I suspect.  In his typical erudite prose, Redfern notes this of Stalin:

"Then there was Josef Stalin, who ruthlessly held sway over the former Soviet Union from 1941 to 1953.  For such an ice-cold ruler, it's highly appropriate that those who claim to have seen the ghost of Stalin walking the old rooms and hallways of the Kremlin say that when he manifests, a dramatic drop in temperature occurs at the very same time.  Most terrifying of all, when Stalin appears, any open doors and windows in the immediate vicinity are suddenly slammed and locked, as if by some macabre force that wishes to ensure those for whom the old premier manifests cannot escape his cold and malevolent stare and wrath."  (p105)

But it is not just places of dark power that become linked to the paranormal.  The book also discusses locations which one might never have guessed could be intimately connected to paranormal manifestations: rivers, tropical islands, stretches of sea, a cemetery in Mexico, Sydney...  They break up the well-known cases in a quirky and well informed way, whilst also introducing supernatural entities of a more exotic nature.  It was fascinating to compare the different versions of wildmen/undiscovered apes/sasquatch/yeti around the world.  There seems to be a deep-seated xenophobia as well as a fascination with hominoids across cultures, perhaps passed down to us from a time when we did indeed live among a vibrant mix of species.  The vestiges of those races may indeed remain in pockets here and there. This book does quite a god job of highlighting their diversity, and tenacity.

Albeit presented in bite-sized chunks, 'The World's Weirdest Places' is an entertaining and sometimes surprising collection of paranormal tales and hair-raising legends from across the globe.  I'm already looking forward to what Redfern comes up with next!