The Book of Transformation 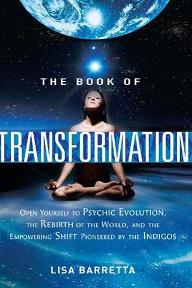 Subtitled "Open Yourself to Psychic Evolution, The Rebirth of the World, and the Empowering Shift Pioneered by the Indigos"

As astrologers would tell you, it's a slow transition from Pisces into the New Age of Aquarius.  There's no exact boundary marker to show when one Age becomes another.  If it's true that the dawning of a New Age creates a new breed of humanity, then that slow astronomical transition surely reflects the evolution that is occurring right now in our species.  Lisa Barretta argues that we are on the threshold of becoming a new species - homo sentient.  On top of our social and intellectual capabilities, our fledgling psychic powers  are about to be transformed into something far more remarkable.  It will change us generally for the better, and she advocates through this book that we had all better start getting ready for it.

It started with the Harmonic Convergence in 1987, she says - our awareness is being raised by an increased frequency flowing from the Galactic Centre, which we are aligning with.

"After the Harmonic Convergence the new influx of energy began to spur us on towards a unified consciousness; this was when we began to dismantle our old beliefs in earnest and take down the walls that separated us from one another.  We are still experiencing this major shift in energy, and when it is complete it will be a turning point in Earth's collective karma.  Once we tune in to this higher frequency, we will evolve as a species and become what we were meant to be: highly aware, multidimensional, psychically gifted members of the human race." (p29)

This has continued through the emergence of the Indigos and other people alleged to have advanced psychic powers. All well and good, but don't expect an evidence-based book argument to back these wonderful ideas up.  There are no references, no bibliography, and very little detail of the specific research that Lisa draws upon to make her case in this book.  Instead, there is a flow of information that draws generally from New Age knowledge, which is cleverly repackaged in the modern twang of technoslang, to make the concepts accessible.  For instance:

"...we will be downloading out multidimensional psychic "apps" and thereby becoming better connected with the entire universe." (p30)

Psychic powers are compared with mobile phone networks (which will become obsolete as we communicate telepathically) and computer and internet systems. Although helpful to conceptualise her arguments, sometimes these analogies become over-extended.

But even so, her arguments deserve attention.  Who's to say that our greater interconnectivity isn't creating a new world?  As Barretta points out, there is a social evolution going on globally, and many commentators have noted the importance of Twitter and Facebook, etc in shaping the revolutions that are challenging the established powerful castes, especially in the Arab world.  But is the evolution in social interconnectivity a precursor of a more radical transformation of awareness and psychic powers?  I remain to be convinced.

Where the author shines, I think, is when she brings the discussion back to a more personal level.  She sets out the ancient system of chakras well, and equates the transforming Kundalini energy with the upgrade to the higher frequencies.  In keeping with many current New Age thinkers, she advocates the idea that we are able to create our own realities through the power of positive thought - that reality itself may be shaped by thoughts and intentions through the transforming power of 'torsion waves'.

"Every thought we have is actually seeding the future." (p35)

Many will find this anthropocentric philosophy to be comforting, but arguably such a concept is at odds with the idea of a unified universe of which we are each, presumably, a small part.  To work, the universe must be a multiverse in which our thoughts and intentions veer us from one new reality to another.  Such a complex reality would also allow for synchronicities, which Barretta describes well:

"Synchronicity is just one way the universe communicates with us by syncing our thoughts up with the master creative force of the cosmos.  The more you evolve and grow into your higher extrasensory capabilities, the easier it becomes to sync up with and manifest your needs and desires.  Synchronicity also teaches us that there is more than one way for things to come about.  You limit your choices by limiting your thinking and not being open to all possibilities.  Staying positive is important in this respect; even the slightest hint of doubt or negativity can bring undesired results." (p104)

You see, I don't buy this last point.  It is too similar to the religious concept of faith, where if you don't get what you wanted from God it is somehow your fault through not acquiring the right mindset.  But that is only my opinion, and I know that many people will agree with the author on this point, whether from a New Age or classically religious perspective.

Where I do agree with the author is on her points about alien intervention. She seems to be a fan of Zecharia Sitchin (p133) and warmly describes a Sitchinite event she attended towards the end of his life:

"I went to one of his [Sitchin's] lectures in Philadelphia in 2010.  The room was packed with a very intelligent audience that hardly seemed representative of the fringe element usually associated with belief in UFOs and aliens." (p211)

Quite so.  She ties the importance of his (and others') work on ancient astronauts into her thesis thus:

"Awareness and mindfulness will be the only two things you'll need to successfully pick up and decode the messages residing in the energy all around you.  The veil of separation is gone.  You have the gift of second sight, the all-seeing eye, which was revered by our ancient ancestors, the extraterrestrial visitors and colonizers who, as I've already noted, are very much a part of our hidden history." (p192-3)

The second half of the book draws in plenty of supporting material about personal psychic development and experience.  A myriad of alternative therapies is described, which the author assumes to be efficacious pretty much across the board (again, without any real evidence presented).  The book starts to become more and more like a visit to a psychic fair.  She is careful not to advocate alternative therapies to the extent of abandoning mainstream medicine, but gets pretty close to the edge at times.  Her descriptions of the transforming effects of ascension upon the body are quite surprising, but generally she toes the New Age party line.

On an astrological level, Barretta considers the 13th Zodiacal constellation of Ophiuchus to be important, although it's not quite clear to me how, beyond a vague reference to the esoteric significance of the number 13.  I would have liked to have seen her astrological arguments developed further in this book - perhaps looking at the importance of Nibiru to the system of astrology.  As a crossover thinker here, Barretta seems to be the perfect author to make that case.

"The Book of Transformation" is well written and presented, and contains plenty of material to consider.  Perhaps it lacks a critical eye, particularly in its analysis of research into paranormal subjects, and perhaps it contains too much descriptive material about alternative therapies.  But the essential thrust of the argument made is engaging, and the tone of the book uplifting and positive.  Readers looking to expand their knowledge of the New Age subject will enjoy this up-to-date offering.

The Book of Transformation