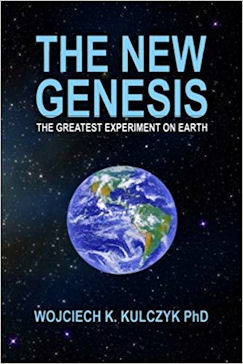 Subtitled "The Greatest Experiment on Earth"

The Universe is a complex place.  Science's job is to model how nature works, and turn our understanding into something useful.  Generally, this modelling works on a reductionist principle: Science is at its best when seemingly complicated processes in nature can be understood with simplifying equations and hypotheses.  Where physics in concerned, this generally works out pretty well.  Likewise with chemistry, notwithstanding some exceptions to the general rules.  But when it comes to biology, the complexity involved seems altogether staggering.

In this book, the author grapples with with the disparity between the straightforward principles of evolution by natural selection, and the sheer immensity of the task when attempting to successfully apply those accepted tenets to biological processes.  Wojciech Kulczyk is not convinced that evolutionary principles are capable of explaining complex forms of life.  As a physicist with a PhD, he is no stranger to science.  His writing is clear and erudite, demonstrating a strong grasp of many of the sciences. Yet, he remains fundamentally puzzled by the evolution of complex life on Earth, and, in particular, how it could have arisen as a matter of chance.

Kulczyk considers it highly likely that the increasing complexity of life here on Earth was given a helping hand.  Actually, many helping hands.  He argues for an intelligence behind the design - that life needs an engineer to create the cosmic blueprint that churned out complex life on Earth.  He stops short of identifying whether that intelligent designer is a spiritual entity, or a set of interested parties existing in the physical realm.  Reading between the lines, he favours the latter.

The author argues that the Earth is such a ridiculously ideal crucible for the emergence of complex life that such a fortuitous location could not have arisen by mere chance.  It seems uniquely qualified to host life - a circumstance that the author finds untenable.  Instead, a being or beings contrived to set up the stage for life - going to some considerable lengths.  This includes the purposeful collision between a comet and the Earth to provide our world with its late veneer of life-bearing water.  Then, along the way, 'they' intervened on multiple occasions to create the intermittent bursts of evolutionary progress noted from the Earth's fossil records.  in a roundabout kind of way, the author mixes punctuated equilibrium with alien intervention.  Our world is essentially an experiment in cosmic and biological engineering, he argues, which we mistakenly think was either due to random chance, or God.

There are problems with this reasoning, I would argue.  The Universe is immense enough for almost any improbable event to emerge somewhere.  Even if this is the most favourable place in the universe for complex life to emerge, capable of reflecting upon itself and the circumstances within which it finds itself, then that's okay.  The chances of self-reflective consciousness finding itself in the best-placed world in the universe for it to emerge isn't infinitely small:  Instead, it's 1 in 1.

Even so, I'm not remotely convinced that life is that precious.  The author discusses panspermia.  He recognises that our solar system is relatively young compared to much of the Cosmos.  However, he doesn't really entertain the notion that life, in some fledgling form at least, can transfer seamlessly between star systems via interstellar comets, or even be encountered within nebula way-stations along a star's grand tour of the galaxy.  Why not?  Instead of life being only here, why can't it be absolutely everywhere, spilling out into space and seeding itself on every planet or comet (usually unsuccessfully)?  In which case, the multiple parallel paths to complexity become essentially infinite in their extent, and the 'chances' of high level functionality emerging from mutating systems over long time periods increases exponentially.

Kulczyk's thesis becomes grittier as he examines the complex nano-engineering that is cellular biology.  The complex functionality of cellular processes is mindboggling, and he does an incredibly good job of bringing this all to life.  Photosynthesis is a case in point, with its series of biochemical processes whose origins seem to defy random mutation.  Pitched at the level of popular science, Kulczyk's descriptions of how cell biology work are factual, informative and well-explained.  He makes good use of metaphor and analogies to illustrate his many points, and I was better informed about modern developments in these sciences as a result.  For example, in the following extract he questions how the complex biochemical processes facilitating nitrogen fixation could have emerged by chance, with its molybdenum-iron containing protein of about 31,000 atoms:

"It is difficult to envisage how evolution could invent such a complex system.  how evolution could select such a special metal cluster interacting with dozens of amino acids.  Again, DNA codes not only this huge catalyst molecule, but also nine auxiliary proteins helping to assemble the metal cluster.  How could DNA know in advance what to code? "  (p41)

He makes the excellent point that the Cambrian explosion saw the emergence of multiple phyla, or divisions of lifeforms - more than we have now (p81).  Why has the variety become stunted over time?  If evolution leads to variety, then why isn't the world full of novel life-forms?  Life, however, is an adaptation to environment.  If the environment on this planet was capable to supporting a broader mix of life-forms in the past, then it's quite possible that our current world could lack a similar wonderful menagerie.  The flux of Ice Ages and interglacials may have played a part in our modern epoch, for example, tempering a more diversified evolutionary procession.  The Holocene, perhaps Anthropocene, is seeing that diversity cut back significantly: Humanity presents an environmental block on diversification as it domesticates nature to its own ends.  Intelligent intervention, then, seems to work in the opposite direction to that being advocated in this book...

Another point which got me thinking was about the capacity for abstract thought among Neanderthals (p100).  Does a lack of grave artifacts really indicate a lower level of development?  We don't (generally) place items in coffins these days: Does that indicate that we are less developed than our ancestors who did?  Obviously not.  There is an assumption that the development of religious thinking indicates abstract thought, and that, therefore, the absence of artifacts shows an absence of such development.  But, perhaps Neanderthals just realised quite early on that there's no God?  Perhaps theirs was a more sensible relationship with death.  In terms of creativity, it is now recognised that Neanderthals painted art on cave walls 65,000 years ago, probably before humans did.  Perhaps the Neanderthals taught the humans art.  Who knows.

This book is chock-full of fascinating science.  The author does not shy away from grappling with a high degree of complexity.  Indeed, that is his very point.  He leaves his hypothesis about the progenitors of this 'guided evolution' until the end of the book.  This final section is speculative.  It derives from Michael Behe's thesis about the fine tuning of nature and intelligent design.  Disappointingly, the nature of these designers is hinted at, but not stipulated.  There is much about the mechanism of change; but by whom?  This is where science needed to give way to philosophy.  More searching questions needed exploring in this book.

The issue I have here is similar to sceptical arguments about God.  Why do you need a middle 'man'?  If the intelligent designers are carbon-based life-forms built of (roughly) the same biochemical constituents as us, then how did they independently 'evolve' to the level where they could do this themselves?  Who intelligently designed them? If evolution occurred naturally for the intelligent aliens, then why not for us, too?  Perhaps our designers are self-replicating robots with an artificial intelligence which has itself 'evolved' over millions, even billions of years?  In which case one can only assume they were at least kick-started by a carbon-based life-form at some time in the past, and set free to continue their scientific experiments across the galaxy.  Again, somewhere along the lines, material beings had to evolve naturally first.  Otherwise, we need God, or at least some kind of directing, intelligent spiritual force.  In which case, we can just go straight to Creationism, and forget the science completely.

It strikes me that we really are 'just' manifestations of complex chemistry.  If there's intelligent design, then it occurred at the blueprint stage of the universe: The rules, the laws, creating the opportunities for this complexity to emerge from carbon, hydrogen, nitrogen and oxygen.  Perhaps our universe is one of many - an infinite array within a multiverse; each with a different set-up of laws and parameters.  In which case, we live in the universe where such complexity is possible, and we have emerged on a planet where the conditions just happened to be right.  Then, it's just down to statistics.  No matter how remote a possibility, it occurs somewhere because there are so many potential planets, so many potential universes.  That we are on the 'right' one is simply because this is the one where it happened, and our consciousness is available to record it.

I'm not ruling out alien intervention.  There's a good chance that we have been visited in the past, and severely messed with.  But that possibility can sit alongside the natural processes that increase complexity and functionality in response to environmental change.  After all, somewhere, somewhen, it had to occur naturally to start with.