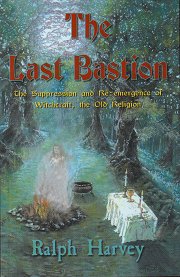 subtitled "The Suppression and the Re-emergence of Witchcraft, the Old Religion"

It's not every day that I read a book about Witchcraft.  But I met Ralph Harvey,. the author of this book, at a Spirit Fayre in Glastonbury a couple of months ago, and found him to be a delightful chap.  He's not at all the kind of person you'd expect to be a Witch.  But then, that's the problem that Witches have in general.  They have a bit of a P.R. problem. 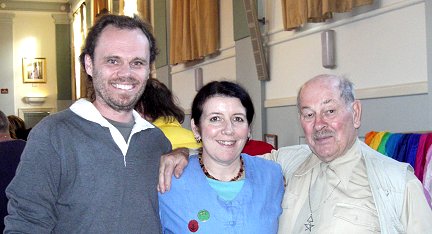 After centuries of persecution propaganda against their ancient craft, witches are still social pariahs.  Their religion, which worships a Goddess rather than Old Nick, has been re-packaged as 'Wicca', and has gained a little more acceptance of late as the world wakes up to the looming environmental disaster that is Global Heating.  Nevertheless, Pagan beliefs are still rejected by the Establishment here in Britain.  Perhaps not to the point of mass persecution, torture, and genocide like in the Bad Old Days, but enough for members of various covens to keep their heads, and pointy black hats, down.

Indeed, Wicca is not even accepted as a religion in its own right in Britain (unlike the USA, which seems to have come to terms with its dark genocidal past faster than us).  Ralph Harvey complains that the latest Census should have put that straight: if 30,000 people declare for a given faith, it becomes officially recognised.  Like the huge number of Jedi Knights out there proved in 2001.

Ralph says that there are more than 30,000 Wiccans out there.  that may be the case, but they must be keeping it to themselves, because officially there are just 7000 in Britain (Guardian, "Campaign to pardon the last witch, jailed as a threat to Britain at war", 13/1/07).  More Jedi than witches?  Amazing, isn't it?

Anyhow, this is a really good book, although it took a bit of time to get going.  It focuses on the history of witchcraft in the English county of Sussex, which is thought to be the 'Last Bastion' of the old Pagan religion.  It's a bloody history, to be sure.  The Christian churches in the 16th and 17th Centuries were filled with rabid hate for Paganism.  In a direct violation of Christ's teaching of loving one another, they set about exterminating anyone who showed the slightest interest in the Old Ways of earth and Goddess worship. Not unlike the way the Nazis exterminated the populations of European Jews, Gypsies and other minorities.  Fortunately, those days of Wiccan Holocaust are far behind us now.  But it's worth reading books like this to appreciate how inhuman our species can be at times, particularly when mob rule takes over.

The book is full of interesting and entertaining anecdotes about witchcraft in Britain today.  Ralph also has a keen interest in the paranormal, which I share.  He writes well, and has a tremendous amount of experience to fall back upon for source material.  His reason for writing his books, and for lecturing widely on the subject are:

"This is but a blowing away of the popular misconceptions associated with Witchcraft, and within these pages, I have tried to show both sides of the coin; both ancient and modern".

This he achieves well.  You quickly gain a sympathetic feel for the man, and his fellow witches.  That's not to say that I'm about to run up the hill next Sabbat, stripping off and cavorting under the Moon.  But I have gained an appreciation for what it is like to be a witch in modern Britain, and what it must have been like in the Bad Old Days.