The Star of the Magi 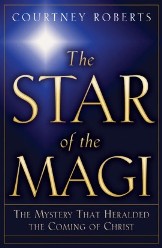 Subtitled: "The Mystery that Heralded the Coming of Christ"

Sometimes when reviewing a book it helps to have some knowledge of the subject.  This was one of those cases!  I've looked into the question of the origin of the Star of Bethlehem for several years myself, and have read some of the books that Courtney Roberts draws on as reference material.  It was a considerable help because, although she does an excellent job of presenting her thesis, the subject itself is an intellectual quagmire. 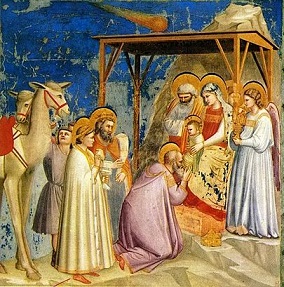 Adoration of the Magi by Giotto di Bondone

There are two ways of approaching the issue of the Star of Bethlehem.  The first is faith; the second is reason.  If you are a committed Christian, then you need go no further.  Your faith gives you all the answers you need already.  If, on the other hand, you would like answers from astronomy, history, comparative religion, and ancient literature, then you are in for one hell of a trip.  In the end, Courtney has essentially ended up in the same place as me regarding the origin of the Star: intellectual agnosticism.  There is no clear answer to what the Star was in reality. Or even if there was any kind of 'reality' to this aspect of the Nativity at all!

My favourite book on this topic was written in 2006 by Geza Vermes, a professor at Oxford who specialises in Jewish studies. It's entitled '

The Nativity: History and Legend', but regrettably doesn't appear in Courtney's bibliography.  His critical analysis of the Nativity stories (in the two Gospels that deal with the birth of Jesus) leaves very little of any of it still standing on solid ground.  The Star of Bethlehem joins the large pile of unsupportable, mythical contrivance.  Courtney Roberts takes a similar line quite early in her book.  It is clear that much of the Nativity is myth, generated many years after the death of Jesus to deify him.  There was a long tradition amongst emerging religious sects of that period of fitting the facts to previous Messianic prophecy. Christianity simply followed suit, particularly through the Gospel of Matthew.  (If you have a problem with me saying that, please don't email me with your objections before you've read '

The Nativity: History and Legend').

'The Star of the Magi' takes us along a slightly different tack.  The author acknowledges that the whole thing is probably a myth.  Because of this, she argues that it is useless to seek out an astronomical solution to the Star of Bethlehem conundrum.  There is simply not enough material to go on in the Gospel of Matthew, creating rich sources of ambiguity. Astronomical solutions previously presented by various authors, most of whom have little cultural understanding of Graeco-Roman Palestine, are easily criticised.  Instead, she argues, we should try to understand why Matthew (but not Luke...) chose to place the Magi into his Nativity story.  Courtney Roberts argues that their appearance in the Nativity indicates the symbolic importance of Persian astrology to the people of Matthew's time.  As she says on page 32:

"Any attempt to treat this story [Matthew's Nativity], or indeed any biblical passage, as accurate or descriptive science is probably naive and misguided at best, and disingenuous at worst.  Ancient Judeans didn't do science - we do.  As tempting as it is to project our own proclivities onto famous people from the past, in the end, it only prevents us from seeing them as they really were.

"I am much more interested in why the author of Matthew turns so quickly to the Magi and astrology to establish his claims for Christ, and why this would be so convincing to his Jewish contemporaries."

I find this a very interesting idea to pursue.  Apart from anything else, it is ironic that the two modern faces of fundamentalist Christianity and Persia nowadays are the USA and Iran respectively.  Which creates an amusing, if not disquieting, admixture.  But pursuit of truth along the Persian astrological path also proves to be a difficult one. The history of the Magi that has survived down the years is fragmentary at best.  We rely for our understanding of the astrological knowledge of the Magi on the writings of later Islamic scholars like Masha'allah.  There does not appear to be any prime source material upon which to hang our judgements.  The issue of the beginning of astrological ages is complex, and made murkier by the understandable habit of later scholars to fit their theory around the dominant religious orthodoxy prevalent during their own time.

To her very great credit, Courtney Roberts does not attempt to bang home one particular solution to the astrological meaning of the Star.  She leans towards a triple conjunction in 7BC as being the event inferred by Matthew, but she offers this opinion tempered by a degree of uncertainty.  She is quite right to.  Her book is stronger for her lack of allegiance to any one particular theory; it creates some balance in an un-harmonious debate.  Add to that the huge amount of fascinating information she presents about ancient Mesopotamia and the Levant, and you have a great book here!

The Star of the Magi

Star of the Magi