This book addresses the enigma that is the so-called Starchild skull: a relic of undetermined origin whose bizarre countenance is matched only by its baffling nature. However, you should not be left with the idea that this is just some kind of scientific tome full of dry argument and counterargument about the forensic examinations commissioned by Lloyd Pye and his varied team of researchers. 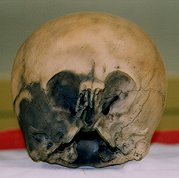 Here, Pye has authored a semi-autobiographical account of his eight years with the skull, bringing to life the human dramas played out in the presence of this long-dead relic.

Roller-coasters come in all shapes and sizes these days, and this particular literary rollercoaster completes a broad span of sweeps, loops, dives and figures of eight throughout.  At the top of this rollercoaster Pye’s broad vision is magnificent, whilst at the depths of the lowest dives his personal sacrifice to learn the truth about this skull often borders on the tragic.

The story of the Starchild is a complex one.  Apparently found in a shallow grave in a long-forgotten mineshaft in the Mexican high desert, the 900 year old skull found its way to the US. along with a companion skull of a woman whose equally ancient bones were discovered alongside those of the Starchild, but this time unburied.  The story of its origins is tentative, but all the tests so far have borne out the essential factual nature of its background.  It may be ancient, but the constantly dry conditions of its burial place have maintained its genetic integrity down the years.   This has allowed for some definitive scientific tests to be carried out; scans, X-rays, biochemical examinations, and, tellingly, DNA testing.

The high degree of abnormality exhibited by the skull goes well beyond anything yet encountered by the many anthropologists, medical clinicians and other related experts who have had the opportunity to examine the skull.  Yet, for the most part, they each individually repeat a mantra that however odd the skull may appear, its nature is explicable within the realms of present defined scientific knowledge. They doggedly insist that there is no mystery to be resolved here; that the Starchild is merely an extreme form of a ‘cradleboarded hydrocephalic’ Mexican Indian child.

Largely rejected by academics and experts, Lloyd Pye’s mission to find out more about the nature of the skull has led to a tortuous journey of discovery.  Large sums of money have been raised by generous donors to commission the scientific testing otherwise withheld by the academic establishment. In the parlance of the British National Health Service, the Starchild had to ‘go private’.  Yet, after years of rigorous (and sometimes not-so-rigorous) testing, a full diagnosis is still not entirely clear.  As is so often the case with frontier scientific investigations, many of the tests have resulted in more questions than answers.

My family and I have been lucky enough to examine the stereolithographic copy of the Starchild skull at our home, when Lloyd Pye visited us some years ago.  It is indeed a fascinating relic, and in my opinion is deserving of scientific enquiry.  In fact, I even painted a picture depicting the child and his mother (right). Various central questions about its exact nature remain unanswered by science, despite 8 years of investigations and a wide range of opinions.

I was looking forward to this book a great deal.  Indeed, I was one of the undoubtedly many people who urged Lloyd Pye to write it.  The story needed to be told.  What was not expected was how he would bring this story so much to life.  He has rendered the science of the skull into a readable text that should be easily understood by lay readers.  That’s no mean feat in itself, of course.  But there are other treasures within these pages.

I’ve learned an awful lot of rather unsavoury truths about all these different groups, through Pye’s wise eyes.  His work here is not unlike that of the British television filmmaker Louis Theroux, who delights in his disarming portrayal of the madness of eccentric cults and individuals, particularly in the US.  It’s an excellent and enjoyable read, without doubt!

If I was going to change anything about the book, it would be the addition of an examination of the mythology and social mores of the Indian tribe that the skulls originate from.  Part of the story of the skulls’ extraction from the mine is itself almost mythical in nature; its accidental immersion in a torrential river before being re-discovered further downriver has a Mosaic quality to it, allowing it to be swept up into our own Western Semitic myth.  Yet, of the legends of its own people there is no mention.

But the central focus of this book is the science.  There is plenty of real science going on in these pages, whether scientists themselves feel comfortable with that or not.  That’s fairly unusual for an alternative knowledge book, and I thoroughly recommend it. The book is informative, educational, and wonderfully insightful on a number of levels.