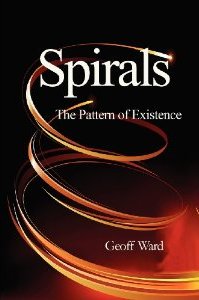 Subtitled :"The Pattern of Existence"

Geoff Ward is a journalist working in the English West Country.  He has written numerous high-quality articles for the Western Daily Press, bringing news from the field of alternative knowledge which otherwise would likely not filter through to the mainstream press.  In the course of this work he has interviewed and reviewed the books of some excellent researchers, including Graham Hancock and Colin Wilson.  Indeed, Colin Wilson has written the foreword to Geoff's book 'Spirals'.

In this book, Geoff has amassed a wide assortment of evidence from various fields of research about the spiral form.  His thesis is Jungian in spirit, taking this form as a universal archetype which appears throughout the world in various ways.  He analyses the meaning of the spiral to humans, particularly in regard to its innate spiritual understanding, which is hermetic.  Geoff considers it likely that our spiritual evolution takes the form of a double spiral, one aspect penetrating the human unconscious, and the opposing aspect raising our awareness of the universe and the lessons it holds for us.

But more than this, the spiral form of spiritual growth indicates how we expand our consciousness whilst periodically returning to our own starting point.  This is an excellent way of appreciating how we learn during the course of our lives, and such wisdom seems to have been generally understood by ancient peoples.  Hence the spiral form in their art and their science.

Esoteric masters like Leonardo Da Vinci also made use of the form.  Geoff mentions in his book the spiral staircase at the Chateau at Blois, in the Loire valley in France.  Leonardo spent the last years of his life in nearby Amboise, and may have had a hand in the design of this elegant stairwell.  Strangely, I have been reading Geoff's book whilst on holiday in that very part of the world, and managed to visit the Chateau in question and take this photo of the spiral staircase.

The staircase fronts and leads into the Royal apartments of Henri III, one room of which was the scene of the assassination of Henri's rival, the Duke of Guise.  The stairwell is certainly a wonderful piece of architecture, with apparent esoteric significance.

There are references in the book which are very useful to my own specialised field of research. ('Spirals' even includes a couple of paragraphs about the Dark Star Theory at the end of the book; the 'last word', as it were.  Thanks Geoff!)  I suspect other researchers will find useful and arcane material here also.  It's that kind of book; an esoteric menagerie collected together by a serious writer who has composed his text with great thought.  Like any antiquarian, the book seems haphazard, but here a pattern or form is also apparent within it.  The spiral form, as it happens...

This multi-layered approach to writing a book is not dissimilar to that of an artistic novelist, creating a form which tells its own story above and beyond the narrative.  In this case, the spiral form of the text leads us through an increasingly deep set of ideas, pulling us in from geometry, through science, to philosophy.

Geoff brings together a highly informative series of scientific facts to build his case that the spiral form is an underlying archetype within physical reality. He then considers more eclectic theories to provide the context for a similar claim for psychology and philosophy.  In this way, 'Spirals' becomes a journey of intellectual exploration, deeply personal, yet written with the objectivity of a thinking, independent journalist.  Being as deep as it is, it's hard to see how the book can hope to gain any kind of popular appeal.  But this is hardly the purpose of the book, I suspect.  Instead, it attempts to present an hermetic springboard to enable the reader to transcend to a higher level of contemplation.  The path of the Initiate. 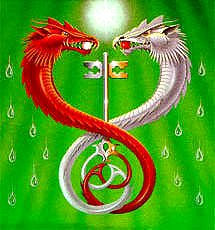 This is not everyone's bag, it must be said, but there will be those who find such a book a refreshing change in this age of dumbed-down supermarket bookstores.

As a parting thought on the subject of spirals, Robert Temple has reported on the Dogon system of graduated initiation into the mysteries of tribal religion.  Included in the Dogon philosophy is the Cosmic Tree, with the Earth as its centre.  A similar double spiral form can be found in the teachings of the Bambara Tribe of Mali, and these revelations led Temple to suggest links with knowledge of the Precession of the Equinoxes, or more likely, the light-cone concept related to creation. See Appendix VII of the updated version of "The Sirius Mystery" (1998).

The 2nd Edition of 'Spirals' was released in 2013, and contains a new appendix entitled 'Torsion Fields, Consciousness and Cosmos'.

Spirals: The Pattern of Existence

Spirals: The Pattern of Existence