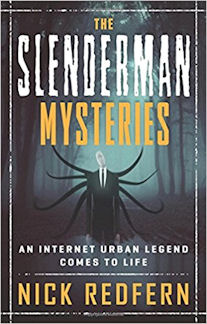 This book about Slenderman contains a great deal on synchronicities.  Perhaps it shouldn't be considered too weird, then, that I picked it up literally just after having watched the X-Files episode entitled 'Ghouli'. The cult TV episode opens with two teenage girls attacking one another, each believing the other is a multi-limbed monster.  Scully looks up Creepypasta on the Internet.  Mulder wonders where it's all going.

I talk about a synchronicity here because the plot device used in this X-Files episode shares themes with a horrifying, real-life crime that occurred in Waukesha, Milwaukee on 31st May 2014.  In this shocking case, two children attempted to murder a friend of theirs by stabbing her in some local woods.  The two (now convicted) girls appear to have been drawn into a very dark psychological space, involving an Internet phenomenon known as the Slenderman.  Fortunately, the victim of the attack survived, although she is left with deep psychological scars.  The motive for the frenzied attack remains anything but clear, but the young perpetrators have been sentenced to long stretches in psychiatric institutes.

Slenderman started as a creative meme uploaded to the Creepypasta website by Erik Knudsen, in 2009.  His sinister depiction of a tall, pale and faceless man seemed to resonate with many of the website's fans, and the spooky meme went viral.  Redfern charts the genesis of this Internet phenomenon, and draws parallels between Slenderman and other, similar 'creatures' from paranormal studies and folklore: The Men-in-Black, the Mothman, the Mad Gasser of Mattoon, the 'Tall Man' legend of indigenous American cultures, and various German legends about a Grossmann.  The author considers the possibility that the Slenderman is the modern depiction of an old archetype drawn from within the collective unconscious.  The perceived (actually, made up) characteristics of this creature involve a sinister, faceless man who lures children into his lair in the woods, to a dark angel, whose array of dark tentacles and elongated limbs can resemble wings; like the Mothman's.  You don't get the sense that any good will come of any of this.

A second synchronicity for me here.  In my Dark Star novels, one of the central characters is the Tall Man.  I portrayed him as a tall, shadowy pale fellow, wearing a suit.  He would turn up at important moments, seemingly either triggering deadly events, or saving the main protagonist from them.  He seemed to be able to act upon psychic awareness of what was about to happen.  You could argue that I was influenced by this same archetype.  But not by the concept of Slenderman himself, because the first novel - Ezekiel One - was published in 2009 and had been written the year before.

Somehow, I appear to have been tapping into the same thing as Erik Knudsen - whatever that was!

Nick Redfern has written about Tulpas before in previous books, and considers it at least possible that the Slenderman represents this kind of manifestation.  However, he indicates that there is a difference between the Slenderman manifestation and  the 'classic' Tulpa, created by magic-workers like Dion Fortune and Alexandra David-Neel. Where they used disciplined magical intent to create supernatural manifestations of their malevolent familiars (to their regret), Slenderman appears to have taken on its own life as a result of teenage fandom.  The creation of the Slenderman phenomenon was inadvertent at best.

Redfern ponders as to whether the archetype seized the opportunity to manifest itself, using the viral meme and the Internet itself as its vehicles of choice.  A self-aware Internet performing chaos magic?  Or the mass emotional power of young human minds in a state of volatility?  This speaks of the power of mass psychic attention, particularly among teenagers whose inner subconscious emotional conflicts occasionally trigger other paranormal phenomena, like poltergeists.  Regrettably, this particular mind-monster has become the centre of a number of disturbing cases, as Redfern sets out in this book.

Many of the observed manifestations of the Slenderman may be hypnopompic hallucinations.  Others seem, like Tulpas, related to the workings of an increasingly schizoid mind.  Indeed, the same could be argued for chaos magic, or indeed any attempt to manifest an alternative form from within.  One might even step back and wonder whether our questions about the Slenderman are themselves lodged deeply in a fear of the power of the Internet - of our children being lured away from safety into a dark electronic forest, never to return?

The growing awareness of grooming and paedophiles lurking in the Internet's shadows is a real enough fear for any parent, after all.  This anxiety must surely also be felt by our children, who listen to our modern versions of cautionary folk-tales designed to keep them from falling into the clutches of some online monster.  In a way, then, the Internet is the reason for Slenderman:  He is the manifested meme of the potential horrors of the Internet itself.  A clutching, luring, faceless threat to young and vulnerable children.  No wonder, then, that Redfern draws parallels with the Pied Piper of Hamlyn.  Has this new handheld Piper not already lured many of us away into a magical cave, set apart and cut off from reality?  I would argue that this phenomenon reflects these cultural issues borne of the Internet itself.  The fact that Slenderman resonates with children so deeply is that he symbolises their own fears of the Internet boogeyman.

So, as you can see, this latest book by Nick Redfern has been another thought-provoking read.  I knew nothing of Slenderman before picking it up, although my sons certainly did.  If I had a criticism it's the amount of space handed over to his interviewed guests.  The early contributors were spot on, and insightful in their remarks, but I felt some of the later quotes in the book could have been reined back a fair bit.  I would also have liked to have hear what Slenderman's creator, Erik Knudsen had to say about it all.  I'm sure Redfern tried to approach him for an interview, in vain.  That absence was made all the more glaring by the inclusion of so many other voices.

Within these pages, Redfern writes in his usual enjoyable style, carefully mixing serious thought with entertaining wit, and a serious, respectful narrative when it is called for.  He has a great skill in drawing together various seemingly tenuous ideas and cases for the reader's consideration.