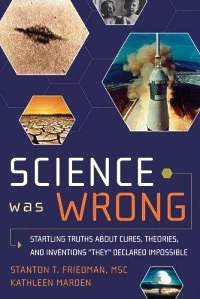 I can certainly see the thinking behind this book.  Stan Friedman's speciality is debunking the debunkers.  His lectures and his books take sloppy negativism to task, and turn many armchair sceptics into a laughing stock.  "Science Was Wrong" takes that general thrust a step further.

Throughout the history of science there have been 'impossibilists' who have denounced the latest discovery or technical innovation as rubbish, often as a knee-jerk reaction.  Of course, scepticism is part of the philosophy of science - new ideas are scrutinised by peers carefully, and reproducible methodologies are essential to good science.  This book has no problem with that.  The problem is the more human element to peer review.  Egos, vested interests, politics, moral and religious objections, and evasion of responsibility are all key elements to understanding why science can go wrong.

The authors describe in detail many well-documented occasions in history when outstanding scientific work has been shot down from the sidelines by people who really should have known better.  They argue that many, many lives have been lost as a result.  For example, the invention of the jet engine, which was fist constructed in the city I live in (Gloucester, England), might have helped Britain see off the Nazis earlier on during the second world war if Frank Whittle's invention had only been taken seriously (pp22-7).  Similarly, Goddard's early work in rocketry was debunked publicly by the New York Times, which held off 49 years before apologising (p30).  The inventor died unheralded, his work eclipsed by the German rocket scientists brought to America after the war.  Inventors often need a great deal of tenacity, as well as vision, to overcome the scepticism and ridicule that can be piled upon them from all kinds of directions.

The authors  argue that "technological progress comes from doing things differently in an unpredictable way" (p40).  This notion seems to be anathema to many scientists whose thinking is often more linear and rigidly structured.  Often the training of pure scientists  sceptical of technological innovation is simply inappropriate - they are not exposed sufficiently to the world of military research, and their experience beyond the narrow confines of their own speciality is insufficient to the task of judging the merits of the case.  More often, but not always, debunkers are simply lazy:

"It is certainly not scientific to do one's research by proclamation rather than investigation."  (p40)

There are some surprises in the long list of victims of bogus scepticism. Immanuel Velikovsky may have had some strange ideas about the origins of the planet Venus, but he was right about its surface temperature, as well as the emission of radio waves from Jupiter (p45) A more modern example is the ridicule heaped upon cold fusion.  The authors argue convincingly that results from new research, conducted largely away from the public's gaze, is showing great promise (Ch5).  A breakthrough would have far-reaching consequences for the entire energy sector.  Which, in itself, may be the problem. 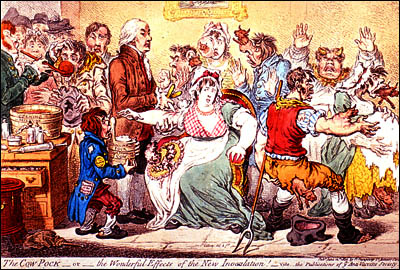 The most powerful writing in the book was in the section devoted to debunked medical breakthroughs.  I found the section about Edward Jenner's conquest of Smallpox excellent (he was another local boy from around here, and the cartoon above features some fine examples of Gloucestershire folk: I think I recognise a few!  As an aside to the authors, the Isle of Purbeck, where Jenner once lived for a while, is not actually an island (p102).  It is a district of Dorset where, coincidentally, I often take my family on holiday).

Another good chapter discussed the intransigence and arrogance of the medical establishment as early theories of bacterial infections emerged. That doctors often don't wash their hands will came as no surprise to many of us in the health sector, even now.

The writing becomes quite political in places, especially when describing the American interest in Eugenics in the first half of the 20th century.  I've seen one Amazon review which didn't like the authors' stance on this - a comment which I find scary, frankly.  The American, and other Western nations', flirtation with such authoritarian ideologies was certainly a source of shame, but at least America drew back from the brink.  The terrifying and tragic consequences of a government doctrine of Eugenics in Nazi Germany were plain for all to see.  Although derived from Darwinism in a warped sort of way, Eugenics itself was not a scientifically valid concept at all.

The chapters highlighting corporate negligence and industrial pollution were also powerful, and disturbing. Controversy rages in the chapters on Global Warming, and the environmental concerns about toxic methyl mercury pollution from chemical industries and coal-fired power stations.  An inconsistency in the book emerges here when the authors contemplate what, if anything, to do about the energy sector's addiction to cheap coal (compare p150 and p158).

The last section of the book looks at the scientific establishment's negativity towards fringe research areas, such as psi phenomena and UFOs.  Having just read about the historical context of grossly unfair - and ultimately wrong - scepticism, one can appreciate how many modern sceptics are falling into the same traps:

"Today's professional "skeptics" often adhere to an almost theistic belief in "science", marked by cynicism and the manipulation of data to fit their personal beliefs. Many plead for scientific scrutiny but are often, in reality, scientifically naive writers.  Mainstream scientists, the media, and the general public are often deceived  by the skeptics' misinformation." (p167)

These are strong claims indeed, but the authors do an excellent job of substantiating them.  Regrettably, much of the material in this section is based upon work previously published by the same writers, and it feels like a re-packaging of their material.  But for many not already acquainted with the scientific evidence for psychic phenomena, UFOs and alien abductions there is much here to ponder upon.