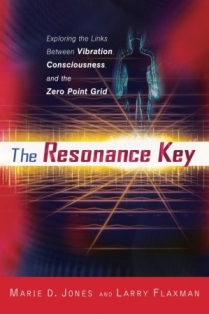 by Marie Jones and Larry Flaxman

Subtitled: "Exploring the Links between Vibration, Consciousness, and the Zero Point Grid"

Modern physics has opened the door to a whole new understanding of the Cosmos.  The Universe can no longer be understood as a common sense background to our everyday experiences.  Instead, the disciplines of the quantum sphere have shed light on an underlying physics that is strange indeed.  Our comfortable Newtonian world of three spatial dimensions and time has given way to wave-particle duality, zero point fields and string theory with its additional curling dimensions.  It is a straightforward enough extrapolation to consider whether this new complexity might generate paranormal, supernatural and spiritual phenomena.

In this book, authors Marie Jones and Larry Flaxman guide us along a haphazard path of intriguing possibilities.  Prior to the advent of quantum theory, and its quirky off-shoots, there would have been little mileage in such speculation.  However, it can now be convincingly argued that we live within a multiverse teeming with connectivity.  This connectivity leads us to the idea of resonance.  Can the inexplicable be explained through inter-dimensional connectivity and resonance?  Are we existing on one level of a grid of multi-dimensional experience, affected by others unseen?  Can we access the other levels through experiencing altered states of consciousness, meditation, ghosts and UFOs?  These are stirring considerations deserving of debate and research.

Much lies with the understanding of mind and consciousness.  Is our consciousness simply a result of the firing of a multitude of neurones in our brains, or is it the manifestation of a field effect which has non-local aspects?  The authors explore our knowledge of the mind and consciousness well.  They present ideas from science, as well as psychology and parapsychology.  They conclude that the journey through modern physics leads us to more ancient understandings encapsulated in mysticism and religious thought.  Through modern physics we can rediscover spirituality.

Early in the book, the authors look at the physics of vibrations and resonance.  It is a necessary building block for their argument, although neither can claim a strong scientific background (the table on page 47 is testament to this, where powers are erroneously incorporated into numbers).  But their coverage is sufficient to give the reader a basic grounding of the physics involved.  From there, the 'science' goes off-piste, with speculative accounts of acoustic levitation and pyramidology.

Further along the way, the authors look long and hard at various paranormal experiences.  Larry Flaxman, in particular, has a keen interest in ghost-hunting.  He provides a useful field guide to EVP experiments in the book, for instance.  Flaxman is convinced that the explanation for ghosts lies in the new science described earlier.  Drawing on the work of John Sabol, the authors argue that ghosts are energies that manifest through resonance effects.  Repetition is a key ingredient to this, which might explain why ghosts are often seen 'replaying' a familiar action from the past, like a holographic video being shown again and again.

Such evidence leads us to a new understanding of the way we experience reality, and generates questions about how our minds truly work.  The best chapter in the book deals with paraconsciousness.  The following paragraph neatly sums up the thrust of the book:

"Synchronistic phenomena may involve the idea of mutual vibrations. Resonance.  Even the principle of harmonics plays into the brain's ability to access other dimensions  of consciousness and reality. Through brainwave resonance effects, identical or similar information may be arising in the consciousness of two individuals who have in common "neurophysiological characteristics".  The fact that the collective psyche or unconscious exists in "an all -pervasive hyperspatial realm" suggests that it can initiate synchronistic phenomena in the same way that one twin can initiate it in the mind of his her her twin sibling.  Non-locality shows that particles can do this.  Why not thought?" (P165)

I like this idea.  It is succinct and elegant. Unfortunately, by expanding the subject of resonance to fill an entire book, this message gets lost somewhat.  One feels that an essay would have sufficed.  On a positive note, though, the peripheral material that is added in does contain some real gems. For instance, there is a section on psychoactive drugs (the discussion of which is justified on the basis that these substances "tap into the paraconscious"). I discovered that for the last couple of years I have been growing a plant in my garden which has strong hallucinogenic properties!  Salvia is perfectly legal (I bought the planets at a local church plant sale, ironically enough!) and yet purports to offer the opportunity to explore the 'paraconscious' mind.  An entertaining realisation!

"The Resonance Key" offers the reader a curious mix of science and speculation. It is enjoyable to read, with some jaunty personal off-shoots and comments.  What is loses in its focus, it gains in its open-minded appraisal of a wide corpus of new and exciting work.