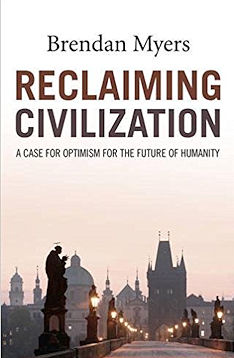 Subtitled "A Case for Optimism for the Future of Humanity"

For the most part, this is a philosophy book.  The author, a Canadian academic with an interest in pagan thought, is doing some personal soul-searching during his long summer break.  This provides something of a narrative upon which to attach various philosophical arguments.  I can identify with this process, having gone through a similar internal rumination in my late teenage years.  I struggled with questions like:

These are similar to the kinds of questions Brendan Myers explores, although his chosen format is often academic and rigorous.  He draws upon extensive personal learning and reading, and provides a solid discourse and argument.  Certainly, the journey the book took me on was interesting, informative and enlightened, and I felt the better for it.  However, in the end, the conclusions seemed to fall short of the Magnum Opus goals set for the book.  Looking back, it seems to me that the author was examining his own attitude and feelings towards life, and then extrapolating outwards (I suppose we all do this); taking a melancholic sensibility and trying to re-motivate himself by critically examining the broader picture to find reasons to be cheerful.

As one might expect from philosophy, this generated more questions that answers, and just a general sense from the author that, yes, I probably should just get on with it, then.  But that personal aspect aside, the book delivered a broadside of philosophical materials and arguments in a highly readable and engaging manner.  For me, it placed the current political trends towards nationalism and mega-corporatism into sharp relief.  The author's humanist approach went hand-in-hand with a gently left-wing economic and political outlook.  His appeal to the reader was essentially to battle on, despite all of the absurdities, because things could be better than this.  Indeed.  The dichotomy is that the aggressive nationalistic and imperial ambitions of many civilisations are the very elements that drive the levels of high civilisation up (levels as defined by Western thinking).

In which case, what kind of civilisation should we be aiming for in the first place?  That, essentially, is where the meat of the book lay.

The front cover of the book shows Prague's old town as seen across the famous Charles Bridge (unusually empty of folk).  It cleverly reflects many of the flavours of the book:

The author takes the reader right back to the very beginnings of civilisation, working up from first principles.  We encounter many outstanding philosophers along the way.

Brendan Myers' rural idyll, whilst house-sitting in the Bohemian countryside, allowed him to consider how civilising principles first arose among small community groups, and how eventually 'otherness' created antipathy between tribes, and the emergence of physical defences around settlements.  These arguments felt at odds with some of his later descriptions of pre-Columbian life among indigenous folk in North America, but did feed into his general thesis that civilisation can take many forms, not all of them obvious.

In principle, his review of philosophical history seemed sound, although I found myself questioning his assumption that food surpluses created by the organisation of labour would (literally) feed into greater rates of reproduction, and population growth.  In fact, poverty and high infant mortality is often a driver for higher birth rates - hence why Africa's population is currently rising significantly compared to wealthy old Europe, where it generally stagnates.  I found the section on how farming methods, and crop choices, shape cultural mindsets much more convincing (p170).

Then came issues of power, dominance, kingship and, I guess, the evolving feudal nature of most early civilisations.  In many ways, not much has changed - just the cultural lens through which we view things.  Most of the world's wealth is owned by a quite small band of people whose barony is carefully wrapped in an artifice of liberty and freedom.  Our engagement as homo economicus indicates broad rationalism, and a reduction in conflict, but built within a structure which actually benefits a select few vastly more than others.  Still, better that than bloodthirsty raping and pillaging, I would say.

The author discusses how a human veneer covers our inner animalistic, or child-like, nature (p234).  I'm reminded of advances in neuroscience, and the important emerging relationship between different parts of the brain (e.g. the rationalist pre-frontal cortex c.f. the emotional limbic system).  These dual-brain conflicts within us very readily explain how power is practically wielded, and civilisation controlled.  Given that modern humans have been around for over 100,000 years, then that emergent rational thinking has been active for a similar period of time.  Arguably, one might counter that it's the retention of the survival drive of the limbic system which drives forth many of the civilising factors, and which puts up the walls.  In this, I'm swayed by Machiavelli's description of power over, say, Plato.  Getting the job done and staying alive means sometimes setting aside moral principles, and it's this approach that sustains an empire - rightly or wrongly.  The human dual-brain creates the self-evident dichotomies found within our civilisations.  Our ambiguous cultures merely reflect our dual natures, our cognitive dissonances.

For an author who often writes about paganism, that particular topic did not feature as strongly as I had expected.  Towards the end of the book, the emphasis shifted towards the 'immensities' beyond our life-bubbles.  Experience of nature, space, cosmology.  The author seemed to take great solace from nature itself, and his immersion within it (walks and cycle rides in the countryside, views from look-out posts).  There were elements of eco-mysticism, certainly a due regard for our planet's own welfare.  The message seemed to be one of re-connection.  Civilisation creates great absurdities, many of which we are so wrapped up in we don't even see them (the increasing dominance of our virtual lives been a stark example).  So, a laudable enough aspiration, although perhaps not the kick-butt conclusion one might have hoped for.  But, as I noted previously, that's philosophy for you.