Inside the Real Area 51 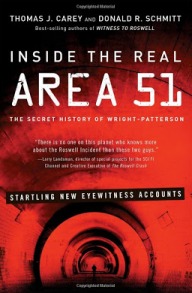 Subtitled "The Secret History of Wright-Patterson"

I attended a UFO conference in the UK recently which was generally sceptical towards the subject.  Several of the speakers put forward the case, with 100% confidence, that there was no fire behind the smoke.  So much could be explained away that no one in their right mind could really continue to believe in the Extra-Terrestrial Hypothesis anymore.

One speaker bravely noted that you only need one case to be true to prove that alien visitation is real.  That case, in my opinion, is Roswell.  Two researchers have done more than any others to cement the veracity of that case, and they are Thomas Carey and Don Schmitt.  Their huge popular 2009 book 'Witness to Roswell' provides so much eye-witness testimony and so many death-bed confessions from prominent players that the case for a massive, sometimes violent cover-up becomes undeniable - at least, it would do using normal legal practices of admissible evidence in a court of law.

This latest book continues that quest for Truth.  It builds up and reinforces the events that took place immediately after the Roswell incident, many of which took place at Wright-Patterson Air Force Base.  A very straightforward story emerges from the accumulated evidence - one that, despite its extraordinary nature, benefits from fitting the facts in a way that alternative, more prosaic explanations fail to do.  Often spectacularly.

Before I get into the book's details, I should make an initial criticism about the title.  This book is not about Area 51.  I dislike the use of subtitles, but in this case you need to read the title's subtitle to get a grip on what it's really about:  The secret history of Wright-Patterson AFB.  For the life of me, I cannot understand why 'Area 51' appears so prominently on the book's cover and spine.

Fortunately, a book should be judged by its content rather than its cover, and in that respect this new book by Carey and Schmitt does not disappoint.  The authors begin by highlighting the proud history of the Wright-Patterson base, which go right back to the first mechanical flights conducted by the Wright brothers.  They point out that there is no 'Hangar 18' on the site, although there is a Building 18 (more specifically 18F) with an attached hangar (p34), which appears to have harboured mysterious remains/debris in the past - above and beyond the Foreign Technology that was part of the remit of the base's normal operations.

At this point, death-bed confessions and other testimony from contractors who worked in the base take centre stage.  Perhaps it will come as little surprise that Wright-Patt, despite its own denials, was extended downwards in a big way.  It was fascinating to read about the extreme ways that the secrecy of this work was maintained, as well as some of the mysterious things witnessed by contractors whilst embedded under the base during the work:

"It should be clear from all these testimonies that, in addition to physical crash wreckage, bodies from another world were brought to and stored at Wright-Patterson, beginning with the Roswell crash in July of 1947.  The evidence suggests that the bodies were preserved in a state of cryogenic suspension by some combination of low temperature ("on ice") and cryogenic gas or solution." (p106)

The authors present new research by Anthony Bragalia, who also contributed to 'Witness to Roswell".  This time, the focus is on first-hand accounts of early research into memory metals, leading on from the reported 'shape-recovering' properties of fragments of metal that did the rounds post-Roswell.  In this regard, mention is made of Colonel Philip Corso's testimony about back-engineering of Roswell material, and its consequent widespread seeding in US industry - although the authors appear cautious about Corso's own 'deathbed confession' material.  Surprisingly, no mention is made of 'actuators' or DARPA during this section of the book.  Readers should find a Google search bringing those terms together with 'shape recovery' very illuminating.

[We at 'Cosmic Conspiracies' wrote about this subject, back in 2001, here]:

In addition to the back-engineering work, the book pieces together the post-Roswell picture of how the USAF and US Government came to slowly decide how they would handle the ET/UFO problem.  An in-depth, frank analysis of the various inquiries into UFOs indicates a changing political picture behind the scenes that eventually culminated in the Pentagon's 'stick it up and then tear it down' hatchet job of Project Sign, leading to Grudge, Project Stork and the discredited Project Blue Book.  The hidden history of Roswell was thus contained effectively; with military precision, one might say.

Yet, the USAF never managed to finally decapitate the corpse of Ufology.  It continued to rise on occasion, to be met with another debunking committee or report (latterly sourced from academic circles) abetted by a quiescent, unchallenging media.

During all this time, Wright-Patt had secreted the evidence away and had put the fear of God into anyone who even hinted at disclosing the truth.

"In short, everything needed to prove that Roswell represented the crash of an extraterrestrial spacecraft and its crew was at one time housed at Wright-Patterson AFB - and it still may be.  After all, after more than 60 years or rumors and whispers, the base remains shrouded in mystery.  And like all former Strategic Air Command bases...Wright Patt is an underground maze of secret vaults, tunnels, and multi-level hangars." (p171)

Testimony in the book is widespread from across the military ranks, going right to the top (e.g. p174).  It's clear that many of the key players eventually wondered why it was all hidden away and denied for so long.  Once the train was set in motion, and the safeguards against disclosure put in place, then rolling back this cover-up was, and still is, an impossible task.  To draw another analogy, no one has control over the National Security dragon now sat on this ET hoard - this jealous guardian's pre-eminence is now self-perpetuating.  Even UFOs buzzing the base in the early 1950s (seeking their fallen comrades?) failed to dislodge the beast.

But, even though we may never bust open the vault, the work of Carey, Schmitt and others enables us to see the true history of 1947 and what followed. Another such 'stakeholder' was the astronomer J. Allen Hynek, about whom the authors devote several chapters.  Unusually, they allow a degree of sentimentality to creep in to colour the otherwise barrister-like quality of their work.  Like Mark Twain before him, Hynek's life spanned the period between two returns of Halley's Comet, and he was frustratingly denied the truth about UFOs before he died.

Hynek left documentation behind that indicates that he carried out clandestine work at Wright-Patt between the time that Project Blue Book was wound up and his founding of CUFOS in 1973 (p203).  Officially, at least, the USAF was out of the UFO business during that period.

"His marriage with the Air Force was rife with mutual distrust, and there remains little in his personal files to suggest that he kept anything secret, except that he continued to make it his life's mission to solve the mystery of UFOs... The documentation Hynek left us shows that although he was a willing accomplice at the time, Hynek's greatest legacy may be that he became a whistleblower to the government deception - that ongoing cover-up that continued after Blue Book. Just as Wright-Patterson itself would go underground, so did their inquiry into controversial atmospheric phenomena."  (p204)

The scenario the authors provide about this notable player in the field of Ufology seems highly plausible.  Their broader understanding of the politics of UFOs is razor-sharp.   I recommend this superb book without hesitation.  Apart from its dodgy title, which I've already mentioned, and "State of Marshall (sic) Law" on p222, the book appears faultless.  It is an essential sequel to 'Witness to Roswell', and provides an uplifting fillip to those of us who continue to endure the relentless battering Ufology unfairly receives from all sides.

Inside the Real Area 51

Inside The Real Area 51