Subtitled "Star of TV's "Most Haunted""

This is a remarkable first-hand account of life as a medium.  By the end of the book, even the most skeptical reader must surely entertain the possibility that spirits interact with us.  There are just so many accounts of evidence Derek Acorah provides, much of it under very arduous and testing circumstances.  His ability is a far cry from the tentative educated guesses doled out by some so-called mediums.  In fact, he gives eerily accurate, often profound, messages to people who are more often than not highly sceptical.  Their amazement is often captured by a television camera or over the radio, which adds the the strength of Acorah's auto-biographical evidence.

This ability of his has been tested by skeptics on radio and television over and over again.  To doubt that Derek Acorah can provide telling and personal messages to complete strangers is to be blissfully unaware of the mountain of evidence in this book and elsewhere.  Instead, the question that must be asked is simply "How?".  Either Derek Acorah can do mind-reading, or he really does interact with the spirit-world in a comprehensive manner.  He denies mind-reading abilities emphatically. 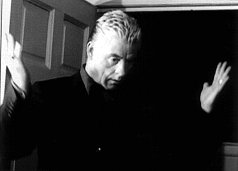 The other quality that comes through, which makes this man so very special, is his empathy.  He loves being around people and assumes no airs and graces, which his wide fame and fortune would have placed on a lesser man. He is approachable, funny, warm and personable.  He seems very aware of the effect his psychic messages might have on people who are emotionally delicate, perhaps through the loss of a loved one, showing great compassion and understanding at a deep human level.

One of my favourite accounts form the book is his trip to Spain when he gets lost attempting to find a spiritual retreat.  He finds a cafe run by an Englishman and his Spanish wife, and gets talking.  They ask him to investigate an empty neighbour's house, which they hold the keys to. The couple were disturbed by paranormal events when the previous owners moved in.  But Acorah is then visited by the couple's relatives, who pass on loving messages to them, saying that the paranormal events were their spirits trying to attract attention.  Initially, the couple think there is devilry involved, and berate Acorah, claiming he is tricking them.  "How so?" retorts Derek; "I found you quite by chance and you asked me to do this investigation!"  Then, as the information he gives them becomes more certain and verifiable, they are overcome by joy, whilst saying that their religious beliefs argue that what he has done is quite impossible.

It is a poignant lesson.  The evidence this man provides of life-after death is compelling.  But our educations and belief systems all-too-often create a wall of skepticism which attempts to steam-roller over the obvious; that this man really does speak with the dead.