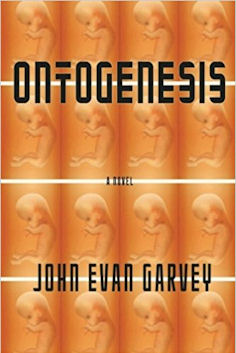 A novel by John Evan Garvey

My son, currently sitting his GCSEs, spotted this book on our dining room table, and said, "Oh, yeah, ontology, that's all to do with God, and our state of being - we've done something about that in R.E.".  Which showed that (a) studying for your public exams actually works and (b) my son knew significantly more about this than me.  So, having read most of John Garvey's excellent novel by this point, I said, "Yeah, it is kind of like that, only way weirder, all to do with alien intervention, all that stuff."  With a half-absent "Cool", my son moved on to something else, and I decided perhaps now was the time to look up what this title actually meant.  It's relevant because, although this is 'just' a novel, in my opinion 'Ontogenesis' is a deeply thought through work of metaphysical enquiry.

I'm not really sure my review is going to do it justice, because the philosophies underpinning the work were, at times, stretching my conceptual understanding.  At one point, I wrote in my notes that the book was Cubist, in that it was using multiple vantage points to explore certain concepts and situations.  Later in the book, it went multi-dimensional, like a game of 3D Tic-tac-toe, and the Cubist structure turned into something more akin to a Möbius strip.

So, let's get a bit academic here, before I try to engage this novel's narrative.  My son was pretty accurate; ontology is indeed the branch of metaphysics dealing with the nature of being.   However, 'ontogenesis' has been defined as 'the development of an individual organism or anatomical or behavioural feature from the earliest stage to maturity'.  Somehow, the author has brought both of these concepts into the book's 337 pages, amalgamating human evolutionary progress with New Age metaphysics, theology and Ufology - all pinned together by plenty of Socratic rhetorical debate.  The contents may involve some heady stuff indeed, but the novel is coated by a chilled Californian vibe - rather in the style of Joe Satriani's guitar work; vigorously intellectual and creative, whilst remaining damn cool.

There's a political struggle woven into the work, too; a very American contest between liberalism and social conservatism:  A breaking free of mainstream thinking, and a rejection of established and repressive community values.  This is all drawn together into the New Age concept of Ascension - a spiritual evolution of being which allows humanity to break through into a multi-dimensional universe already inhabited by more highly evolved alien entities from neighbouring star systems.

The kick in this book is how that transformation plays out on an existential level, i.e. how the protagonist and his Scooby Doo-style band of friends experience this bizarre multi-dimensional roller coaster.  There are many allusions to the Matrix movies, at least in terms of the way the book steps out of the box.  There are many allusions to Virtual Reality games, an increasingly straightforward solution as the narrative weirdens.  But this is no first-person shooter.  The author's science fiction style harkens back to a Golden Age, more like Asimov or Bradbury, and brings in action sequences reluctantly, I felt.  It didn't help that most of the book is written in the present tense.  This may have been a consciously worked aspect of the underlying metaphysics, but it made the pacing of certain tracts of the book feel stilted.  To be fair, it can't be easy to mix heady New Age philosophy with widescreen action adventure.

So, to the narrative.  The story begins as a Close Encounter of the Fifth Kind ("bilateral contact experiences through conscious, voluntary and proactive human-initiated cooperative communication with extraterrestrial intelligence") on the hills overlooking Los Angeles, involving an eclectic group of UFO enthusiasts.  The main protagonist of the story, a marketing executive called Trevor, has brought along his beautiful new girlfriend Veronica, who seems to be settling into this odd clan unexpectedly well.  A highly successful encounter with a UFO turns into a classic abduction experience for several members of the group, which is then plunged into chaos when the UFO is intercepted by dark forces mid-abduction.

The abductees are rounded up and imprisoned within a military facility, partly manned by aggressive aliens.  Upon their escape, they manage to find their ways home remarkably easily - making the whole thing seem like an extended acid trip.  Someone laced the Kool Aid?  But this is just the beginning of an evolution of weirdness, which permeates and ultimately takes over the lives of the abductees.  They progressively experience a deeper multi-dimensional reality, aided by alien presences whose motives are often questionable.  Inevitably, the course of the transformation and ascension of humanity to a new existential level relies upon the courage, determination and underlying humanity of these abductees.

The narrative draws from many, many strands of Ufology.  One might even consider it to be a comprehensive exposé of the subject, attempting to understand this disparate discipline by attempting to incorporate all of its fayre simultaneously.  The alien denizens of Earth, decidedly 'Men-in-Black' in concept, rely heavily upon Ufology's menagerie - Greys, reptilians, Nordics, preying mantis-types, shape-shifters, and so on.

Then there are the many conspiracy theories which each try to explain and/or contextualise the UFO phenomenon, including alien bases, mind control, MILABs, ancient aliens, abductions, hybridisation, multi-dimensional encounters, folklore, demonology, environmental catastrophism, our estranged place in the galactic community, and quite a lot of dark David Icke-style material.

But, ultimately, the preferred solution edges towards human progress to a higher spiritual truth, aided by various quasi-religious figures known as Ascended Masters.  This requires the book to turn in on itself, and provide multi-faceted experiences for its reader, which serve to penetrate this higher reality.  It's an ambitious gambit, and for the most part works well.  It's certainly thought-provoking.  The sardonic, jocular wit shared by the abductee group gives the sense of a literary work smiling at itself knowingly - like an amused Bodhisattva.  Whether the book would appeal to readers not acquainted with the diversity of Ufology, I don't know, but personally I found 'Ontogenesis' engaging and immersive, and enjoyable.  I'd certainly read another of John Garvey's books.