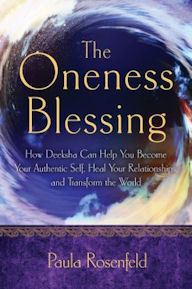 Subtitled "How Deeksha Can Help You Become Your Authentic Self, Heal Your Relationships, and Transform the World"

The front cover of this book immediately reminded me of a washing machine in action.  Although there's probably little in the way of effective brain-washing going on here, this presentation of the remarkable benefits of Deeksha, and its many elaborate trappings, is certainly one-eyed.  Or, perhaps, 'third-eyed.

Deeksha is a Sanskrit reference to an initiation. It appears to me to be a transference of spiritual awareness through the laying-on of hands by a Oneness practitioner, which can eventually lead to a spiritual awakening in the form of a return to the natural, authentic state we were born with.  Where historically this kind of blessing might have only been provided by an enlightened Indian guru, there has apparently been a dramatic proliferation of this process in recent years, as more and more blessing facilitators have emerged in our Communication Age.

It is claimed by its advocates, including the well-meaning author, that the Oneness Blessing can even act on a physical level, changing the brain's functioning through a unique 'neurobiological shift'.  This is thought to occur by a quietening of the parietal lobe.  This process is likened to the raising of Kundalini energy through the body's Chakra system.

Although spiritual, the Deeksha movement is not itself religious.  At least, it claims not to be:

"One of the things I honor and love about the Oneness Phenomenon is that it doesn't ask us all to act the same or follow one set of beliefs.  The phenomenon of Deeksha has no concern for whether or not we believe in God, or some kind of divine force... Deeksha does not interfere with anyone's religion or faith; in fact, it will connect you even more strongly to your religion of choice, if you have one." (p66)

Its philosophy has a Gnostic flavour, welcoming folk of all different faiths.  The initiatory basis of this Guruism reminds me of the ancient mystery schools.  Furthermore, the terms and language it uses to explain its belief systems seem to have been processed through Dilbert's Jargonator (what on Earth is meant by a "de-clutching of the mind"?).  Beyond a vague appreciation of the mystical aspects of its philosophy, I'm none the wiser for reading this book.  Hence the need for Initiation, I suppose.

The Oneness movement promises a very great deal, so it is only right to examine those claims carefully.  The author, Paula Rosenfeld, offers no such examination.  Instead, she is more of a cheerleader for the movement, and her evangelical book is simply a prospectus for those wishing to discover more about something they're considering getting involved in.

It is the structure of this movement which fascinates me the most.  There are a great many testimonials included within the book, almost all of which are provided by the movement's clerics.  They have weird and wonderful titles: "Awakened Oneness Trainer"; "Awakened Advanced Oneness Trainer"; "Oneness Meditator"; "Sacred Chambers Facilitator".   Following along these lines, Paula Rosenfeld is presumably an "Awakened Oneness Author".  These titles point to a clerical hierarchy within a quasi-religious organisation.  Given the ambitions of the organisation, I can see why these forms of religious trappings are being put in place early on:

The growth of the movement is claimed to be exponential following the end point of the last Mayan cycle.  Where 70,000 people were thought to be Awakened in 2012, that figure had risen to > 2.3 million by 2014, with 1 billion in awakened states (figures supplied by the 'Oneness University', p190).  The gurus of this phenomenon, Sri Amma and Sri Bhagavan, advocate that we are entering a Golden Age.  'Spreading like wildfire', the Oneness phenomenon is bringing forth a rebirth of civilisation, the author suggests  (p191).

Its places of worship, if that term is even accurate, are referred to as 'sacred chambers', which appear to be hallowed places where personal miracles of transformation are said to be commonplace.  There are no actual churches or temples.  The central physical hub of the movement is the rather ostentatious 'Oneness University' in India, supporting a network of these enigmatic 'sacred chambers' spreading out across the globe.  Additionally, the movement has plans to create "Golden Age Villages', which are intended as part-retreats/resorts, part-Oneness communities.

Nowhere is it discussed where the money for all this organisational apparatus comes from - one can only assume that the new initiates pay handsomely for the privilege of attending the various courses and retreats on offer.  The front cover of this book springs to mind once again.

Oneness contributors to this book speak about healing close relationships, and deep difficulties in their personal lives.  Deeksha seems to help them put these things into perspective, and to help heal their emotional wounds, which has got to be a good thing.  Oddly, such healing extends to a 'liberation of ancestors' and a commensurate release of karma (p99).

As I said, the book offers a great deal.  The inner transformation that results from sustained Oneness Blessings over time is promised to change the life circumstances of the recipient:  prosperity, healing, the over-coming of addictions.

Deeksha acts as a catalyst for miraculous transformations, and a great deal is spoken of 'grace'.  There was a particularly interesting section on cravings, and how an adjusted mental focus can alter brain chemistry, leading to a relief from addiction (p151).  Again, none of this is presented in any kind of objectified way, let alone with any kind of research to back it up, beyond the fact that some of the testimonials provided by the Oneness advocates are written by health professionals whose expertise lends a certain credibility to the claims.  There is scope within the realms of psycho-somatic illness for good work to be done here, I imagine.  But once you pull out the percentages helped by the placebo effects of faith healing; the proven health advantages of touch, and therapeutic relationships in general; as well as the health benefits of yoga and meditation practice, then the miraculous transformations claimed might be less easy to justify.

The book's well-written and presented, and very positive in tone.  The author's enthusiasm for Deeksha shines through, and the Oneness Phenomenon's advocates may genuinely be seeking a better world for us all.  No doubt, many people have been helped by it.  But, as well-meaning as it comes across, I'd be cautious about having your expectations raised too high.  If it seems too good to be true, it's probably because it is.