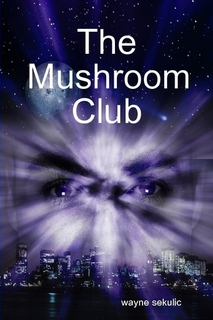 This is a conspiracy theory-based novel set largely in Britain.  The central character is a private investigator called Charlie Kain whose contacts include a rather eclectic bunch of millionaire intellectuals and business people.  As the story unfolds, his contacts form an informal research grouping, referred to as 'the Gang', who assist his efforts to find a missing physicist called Eve.  This gang is not, in fact, 'the Mushroom Club'.  This latter names refers instead to the rest of humanity, who are 'kept in the dark and fed bullshit from time to time'.  The gang's story is one of gradual awakening to the true nature of the Cosmos and humanity's place in it.

The story starts in a disjointed way.  The book is divided into short chapters, helpfully annotated with place and sometimes year.  Excerpts from Charlie Kain's diary are initially interspersed with chapters about events occurring twenty years before. This shouldn't be too difficult to follow, except that past and present tenses often alternate throughout the text, sometimes within chapters. It became clear early on that the book needs some serious editing and proof-reading to tidy it up.  Anyhow, the central plotline is that Eve and her boyfriend disappear in the late Eighties during their travels to an area on the Tibetan/Bhutan border, rife with Buddhist monasteries and, as it turns out, a downed UFO containing some aggressive, reptilian aliens.

Among his many talents (all of the rather elitist characters in this novel are blessed with remarkable talents, perhaps to place them in a good position to deal with the fundamental paradigm shift that awaits the group), Eve's boyfriend Luke is a painter, and created a portrait in oils of her by a ruined archway.  After their mysterious disappearance (and it's never quite clear to me what happened to Luke), the portrait is recovered by Eve's friend.  Some years later, however, her image somehow disappears from the painting, and it is this disappearance that Charlie Kain is charged with investigating.

The solution to the puzzle is rather neat, giving the book a twist that is imaginative and entertaining.  The action is interspersed with much discourse about various alternative theories and conspiracies, usually between the various members of the 'gang'.  Sekulic's theories are amassed from a wealth of underground writings, and he usefully provides a bibliography for further reading.

The book changes in flavour as it proceeds, from a cynical detective novel to Doctor Who.  There are overtones of Torchwood, with a blood-thirsty 'Predator' as the monster.  The way the gang gets mixed up with an army unit, facing off the unknown alien threat, also reminded me of Doctor Who's affiliation with U.N.I.T., especially given the inter-dimensional means that are used to inevitably defeat the aliens.  In this way, the novel is very much based in popular British sci-fi tradition, and even the American characters are radically anglicised.

On a social level, the book is about relationships and community, and how the characters need each other's support to achieve their goals.  There's plenty of psychology too, which is unsurprising given the author's background.  The description of alien abduction and its aftermath is particularly poignant.  Unusually for a novel, there are diversions into poetry, mysticism and philosophy.

'The Mushroom Club' is a fast-moving romp, which would have been more fun to read if the text had been cleaned up prior to publication.  This is Wayne Sekulic's third book, and I would earnestly recommend the services of a proof-reader for his future works.