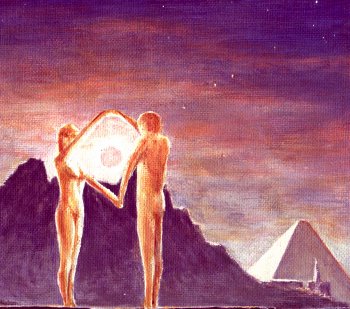 
The fables of gods that once ruled our world have moved with us through time,
like shadows of dreams.

Now, a second generation of mythological gods comes to Earth.  However this time the encounter is quite different. Since the narrative of the book is written from the Nefilim’s point of view, the reader learns why they used and, at times, abused humanity.

The story begins when Earth was still in its infancy, and takes the reader through space and time. It explains how the Nefilim, after being exiled from their distant galactic home, entered our solar system. While their battered planetary spacecraft scarcely managed to protect the life forms it carried, it was trapped by our sun’s gravitational pull and forced into a large elliptical orbit. During the Nefilim’s horrific journey through space the highly advanced race, that was once on the threshold of entering the fourth dimension, regressed so severely that eventually they awakened as Adams.

Plagued by amnesia, all knowledge of their past would have been lost had it not been for Astraea; one of the ancient Nefilim and mother of the character Anu. Since Astraea was not strong enough to join her son on the voyage, before he left, she ingrained in his spirit the memory of his home, in the hope that Anu and his followers would one day find a way to return.

The intelligent race of Nefilim developed quickly.  However, their advancement soon stagnated because their protective environment gave them no stimulation. At last, an unexpected incident rekindled their race and they began to explore the heavens. ‘The Nefilim’ explains what their race had lost when they regressed during their intergalactic voyage. How unrepentantly they used humanity to acquire an ability and sensation that our people possessed in abundance.  Why these sensations were of such vital importance for the Nefilim’s growth and advancement, that they treasured them more than life itself.

The narrative takes the reader through space and time, while featuring the lives of a handful of Nefilim. However, the primary focus of this story is on Dia and Ashkin; two soul mates who cannot recognize their love until they endure life on Earth. Their affection offers a glance at love one can only dream of; it displays sexual spirituality foreign to mankind. While the Nefilim experience Life on Earth, you witness a Quaker’s simple life, as it is tossed into turmoil. You find yourself in Germany during the holocaust, and in Russia, at the time of Czar Nicholas.

Finally, in an unusual twist, you find that the Nefilim are part of the modern world,
shaping the destiny of an unsuspecting woman.

The reader is left pondering; Since the Nefilim concealed their presence on Earth so exceptionally, could the gods of mythology be those Nefilim ancestors? Could it be possible that they still live among us? Could we be the new race of Nefilim?