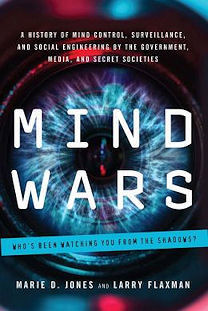 By Marie Jones and Larry Flaxman

Subtitled "A History of Mind Control, Surveillance, and Social Engineering by the Government, Media, and Secret Societies"

When I was at school, I studied Orwell's '1984' for 'O'-level English Lit.  The year was 1984, funnily enough, but the potentialities of his masterpiece still lay sometime in the future.   By contrast, 'Mind Wars' by Jones and Flaxman is essentially a history book.  True, the West has not succumbed to eternal Totalitarianism, but Big Brother definitely landed sometime in the last 20 years - propelled along by our unrelenting desire for Internet access across a wealth of media, via a myriad of addictive gadgets; as well as the incredible processing power of Agency supercomputers.  The philosophical question that results is - are we still free?  Or, somewhere along the lines, have we become unknowingly controlled?

This books seeks to understand the broad set of implications of mind control.  It doesn't simply look at how governments and agencies seek to control their populations, but also how we each manipulate others around us.  In extreme cases, high levels of personal control can lead to nefarious religious cults, experimental black ops like MK Ultra, and the kinds of sickening institutionalised abuse which we have all become accustomed to hearing about in recent years.  All of these dark subjects are covered, reasonably adequately given the wide scope of the book.  There a number of wide-ranging discussions, taking in sociology, comparative religion, politics, psychology, mental health... and I.T.

The book begins small by looking at people one meets in every day life who might exhibit Machiavellian tendencies.  The links between narcissism and mind control are many, it seems, as anyone dealing with a family member suffering with Narcissistic Personality Disorder might attest to.  Then the book sweeps on to how the minds of our ancestors were controlled through religious indoctrination, ritual, and, if those didn't work, good old torture.  In many parts of the world, plus ça change.  I entirely agreed with the authors that the historic genocide of witches was a form of control and persecution of women by men, which in general terms is once again on the rise globally.  What I agree less with is their inclusion of 'sacral symbolism' as one of the six factors defining ritual (likely, they meant 'sacred', although that might depend upon the type of rituals we're talking about, I guess (p36)).

The authors then explore the dark underbelly of the CIA and its nefarious MKUltra programme:

"From the early 1950s into the early 1970s, the CIA was involved in mind control research under the name of MKUltra.  Thanks to a number of declassified documents...we now know that a specialised sector of the CIA, known as the Scientific Intelligence Division, performed a variety of experiments with the assistance of colleges, prisons, institutions, and hospitals, many of them illegal and without victims' approval or willingness, involving mind control, behaviour modification, LSD and chemical exposure, sensory deprivation, and even sexual abuse and torture.  Many of the victims were children." (pp45-6)

The following chapter reads like a horror book.  I don't really need to detail the shocking experimentation work of Canadian psychiatrist Donald Ewen Cameron, or the 'sleep room horrors', or the way multiple, sickening abuse was suffered upon children (children, for Christ's sake!) to create artificial Dissociative Identity Disorders that might provide the CIA with future 'human weapons'.  It's all deeply disturbing.

Much like the subsequent chapters on cults.  In fact, pretty upsetting all together.  I had never realised the full horror of the Jonestown massacre until reading this book.  The authors included selected transcripts of the last hour before the whole community committed group suicide, children and all.  I rather wish they hadn't.  Some things can't be unread.  Then follows a more 'normal' account of life in present-day cults in the U.S., which pale in comparison, but are still compelling cautionary tales for the unwary.

Less convincing was the section devoted to V2K (Voice to sKull?).  'Targeted Individuals' are "coming out in public via online forums and websites" (p170) to describe how they are victims of individual, extreme surveillance and mind control.  These accounts seem to me to be the very real fears of mentally ill people suffering with acute paranoia whose lives are falling apart around them.  Although that thought is picked up on by the authors, they tended to give such fears a great deal of space, citing various DARPA-style military inventions (energy beam weapons, microwave cranial infiltration, etc) as circumstantial evidence of capability.  The implication is that some form of MKUltra continues, randomly targeting the man-on-the-street.  I don't really buy that, to be honest.

The book then winds up with electronic surveillance, or our realisation of how our inter-meshed lives are no longer our own.  Then there are the cameras, the drones, the satellites.  As I've noted before, subjects of Her Majesty might not be as alarmed by this as our American cousins, who have, for a long time, lived under the misapprehension that their world is free.  It would be if you ditch the TV, cellphone, PC, tablet, credit cards, store cards, etc, and then go and live in a barn in Boonsville.  But, then, you'd probably be labelled as some kind of Cultist.  One can kind of see how this Mind Control lark works...

One issue I would take up with the authors is their assertion that Hitler was some kind of cult leader (p77, p142).  Insofar as any darkly charismatic politician might draw a devoted following, this might be  said to be true, but the German people of that time were by no means innocent sheep naively lead by a bad shepherd.  They voted the Chancellor and his fascist gang in, for starters.  Then just look at the events of Krystallnacht to realise that that tinderbox was going to be lit, one way or another.  The hatred of others, born of decades of post-war hyperinflation and enduring poverty, was already there.

All the same, this was probably the best book I've yet read by Marie Jones and Larry Flaxman.  It was certainly unsettling, and depressing.  But if we don't inform ourselves of these matters, how can we hope to maintain what little we have left of our freedoms?