The Real Men in Black 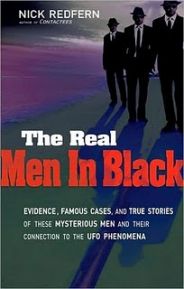 Subtitled "Evidence, Famous Cases, and True Stories of these Mysterious Men and their Connection to UFO Phenomena"

Nick Redfern's latest book tackles the subject of the Men in Black, a bizarre phenomenon which formed the basis for the Hollywood movies starring Will Smith and Tommy Lee Jones.  The Men in Black certainly made for entertaining fiction in the cinema, yet many folk may not realise that there have been a number of accounts of these pale dudes in black suits and ties, dark sunglasses and Fedora hats.  So much so, that they have taken on mythical status, especially in the paranoia-strewn world of Ufology.

Redfern tackles the subject with his familiar wit. His books are always enjoyable to read - he combines depth and intelligence with a light-hearted banter that quickly endears him to the reader.  Following a brief flirtation with folksy American gags in his last book, his turns of phrase have returned to his more normal erudite style, much to my personal relief.  The book is a delight to read, paced perfectly throughout. It is also based upon real interviews, journals and 'old-fashioned' research, in a pre-Internet sort of way.  As such, one doesn't suddenly encounter sections gleaned fastidiously from internet sources, like so many non-fiction books these days, where techno-babble way beyond the author's speciality betrays their reliance upon Google.

The source of the Men in Black phenomenon is centred upon a small selection of UFO researchers, Albert Bender, Gray Barker and John Keel.  The first 'modern' encounter (for this phenomenon may creep back down the centuries in differing guises) was with Bender in 1953, who was terrified out of his wits by three somewhat supernatural, sinister characters who paid him unwelcome visits.  It is clear that he encountered something, and was badly affected by it.  It is also clear that Bender's state of mind at the time was not particularly orthodox, particularly for the 50s.  From this murky tale was born the phenomenon of the Men in Black, perhaps enhanced and refined somewhat by the other two authors named above.

Speculation is rife as to the purpose of the visits from Men in Black, whose own nature is open to significant conjecture.  If they were government agents, then their purpose was to scare people investigating phenomena that the government did not want publicly disclosed, and in Bender's case this certainly worked because, as a result of his encounters, he shut down his blossoming IFSB organisation.  But as the book proceeds, it becomes clear that the phenomenon is varied, and overall does not sit well with a facile explanation such as this.

There are two photographs of Men in Black published in the book, one thought by some to have been a lookout for an illegal operation, the second a 'Walter Mitty' style character who hung around some delegates at a UFO conference.  Both made themselves scarce upon drawing attention.  Where the photos themselves seem unconvincing, Redfern provides us with a selection of tales of MIB, including the Mad Gasser of Mattoon, the salaciously named 'enema bandit', and the sinister case of Dr Herbert Hopkins.

"[There is] a  curious lack of thought for one's personal, physical safety when dealing with the Men in Black...One might be inclined to strongly suspect that these black figures hold some sort of sway over our mental faculties and our ability to think logically and coherently." (pp97-8)

Other later encounters seem to owe more to myth than fact, perhaps reflecting on the paranoia of those involved in the UFO field:  (Like ASBOs, has an investigator 'arrived' without a personal MIB encounter, I wonder?)

The second half of the book is classic Redfern.  He pulls together varied opinion and ideas from the UFO community as to the nature of the Men in Black.  No conspiracy theory is left unheard, no matter how fantastical.  Indeed, such is the nature of the phenomenon that finding a single explanation requires a rather complex theory to develop - no more so than the assorted Time Travel theory of Joshua P. Warren. Wonderfully inventive stuff, and definitely deserving of the generous space Redfern provides for his ideas.  But other fields of fringe research also find common ground with the MIB phenomenon - folklore, fairies, demonology, magic and mysticism. The tableau is as engaging as it is varied, and Redfern studies the potentiality of the subject non-judgementally.  His favoured explanation - that of Tulpas, is certainly not the strangest on offer.

Whether the origins of MIB are cultural, alien, psychological, paranormal, supernatural, mystical or hoaxes, one is left with a thorough understanding of the complexity of the subject from this excellent book.

The Real Men In Black