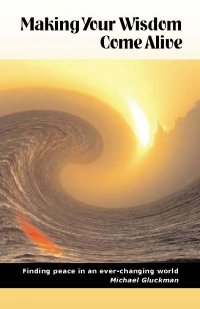 Subtitled "A Guide to the Source of Your Wisdom and Joy"

This is the second edition of 'Making Your Wisdom Come Alive'. First impressions are of a book title that doesn't grab me, and a Yin/Yang motif on the cover generated from a distorted seascape.  It looks New Age, and wishy-washy.

But looks can be deceptive.   Actually, this book is all about deep spiritual wisdom, derived, in the most part, from Eastern traditions.  It quickly takes the reader in far more rewarding direction than its cover suggests.

Author Michael Gluckman shows that there are two routes to wisdom - the path of devotion and the path of knowledge.  He says that the religious involvement of most Americans is along the former of these two - that of Faith.  His own exploration takes the other path - that of knowledge.  This I like - a lot!  His interests lie particularly in meditation practice, although perhaps not in the way many of us think.  He explains that the ascetic requirements of many Eastern practices are often misplaced.  There are some simple truths that will open your eyes to the wider reality without years of difficult meditation practice.

Normally, I would be somewhat sceptical of such a claim, but having read this book I can say that he is actually right.  I've read many difficult books on Eastern Mysticism and meditation, and have never before gained the rather straightforward insights that Michael Gluckman discusses in this book.  I think he is to be congratulated on presenting his wisdom in such an accessible manner.  Unusually, he urges against devoting huge chunks of one's time to shutting out the world, and one's own thoughts and feelings:

"Getting rid of 'bad thoughts', is like putting your hand out to stop the ripples in a pond; the more you try to stop them, the more they seem to increase." (p41)

Instead, one needs to relax into being infinite.  One's real self is simply the state of awareness itself.  All of the rest is like moving pictures projected constantly across a screen.  Awareness itself is self-illuminating, and is the true nature of universal Being.  We can all discover this within ourselves.

"Although Awareness is so vast and great, it feels like just who you are.  As this Awareness, the true subject, you feel right at home." (p53)

As I practised the exercises of mind described by the author, I did indeed get a sense of this core of our being, and how ephemeral all of the rest of what we normally understand to be Self really is.  I know that I've come across these ideas before, meshed within the jargon of various religious texts.  I've always appreciated the value of these teachings, particularly the Buddhist ones.  This book allowed me to appreciate those ideas at a deeper, more personal, level.  I find myself relieved that these techniques are so accessible, and allow me to disregard the need to drill myself with breathing exercises and mantras, or to starve myself, or avoid alcohol, or shut myself away from the world.

I'm also relieved that there is no intrinsic moral or social barrier to Enlightenment - as the many teachings in the second half of the book also show.  This second section contains a selection of passages from ancient texts and scriptures, as well as some more modern teachings from enlightened masters.  Michael Gluckman demonstrates that his spirituality is talked about by many of the world's great sages, in terms that are easily identified when the wisdom is understood.  He adds commentary to draw out the similarities between his modern descriptions and the ancient texts. His favourite stories are those of the Chinese Zen masters, but he also includes Buddhist tales, Hindu teachings and the wonderful Songs of Kabir.

The verses he includes from the New Testament weren't quite as convincing - I felt he was trying to find the path of knowledge in more devotional texts which were evidently faith-based.  But, saying that, even in the Christian and Muslim traditions there are relevant teachings that could be considered mystical, even heretical, e.g. Meister Eckhart, and the Sufi masters, which he provides convincingly.  This exploration of comparative religion and mysticism is fascinating.

This book is a little gem, and I think it would appeal to anyone who wishes to explore their inner spirituality via the 'path of knowledge'.