Lost Secrets of the Gods 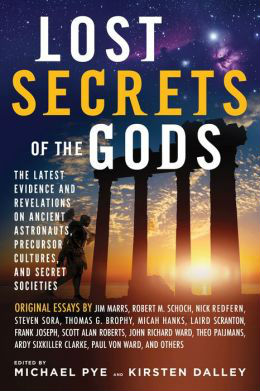 I enjoy reading these compilations offered by New Page Books.  The eclectic mix of essays on offer are written by mostly well-known authors, with a few introductory essays thrown into the mix to liven things up.

This particular compilation is not as von Daniken-esque as the title might suggest.  Indeed, there is little on offer for those particularly interested in the Ancient Astronaut Theory (which now has its very own Three Letter Abbreviation: AAT), but perhaps that is unsurprising when one peruses the list of contributing writers:   Jim Marrs, Robert Schoch, Nick Redfern, Steven Sora, Thomas Brophy, Micah Hanks, Laird Scranton, Frank Joseph, Scott Alan Roberts, John Richard Ward, Ardy Sixkiller Clarke and Paul von Ward.

Quite a few of the essays strayed off the path outlined on the cover of the book, suggesting that many authors submitted work more attuned to their current interests than to their brief.  Indeed, until Paul von Ward's discussion of the case for what he terms "Advanced Being Intervention Theory" 100 pages into the book, the early essays steer clear of the AAT almost completely.

Nonetheless, the result is a highly engaging and entertaining read, and loses little through the lack of overall narrative.  I'm even tempted to suggest that the fact that the writers are not singing from the same hymn sheet prevents this offering from becoming simply a dull repetition of previous works.

My favourite essay in this collection was the highly informative one written by Ardy Sixkiller Clarke.  Unlike many of his literary colleagues here, he actually did write about the AAT, providing a concise and thoughtful history of the subject.  His dispassionate and accurate account of how the AAT first emerged highlighted just how many early pioneers there were in this field, in some cases well before von Daniken and Sitchin.  The earliest appears to have been Charles Fort, as early as 1919 with his "Book of the Damned" (p159).  The repercussion of this date is that the AAT will turn 100 years old in just 5 years.  A message from the Queen in the offing??

The essay then takes in a wide swathe of origin myths from Native American Indian cultures which suggest alien intervention in the past.  So forthright are these claims from within many tribal groupings in the States that an annual conference has been gaining ground to present indigenous knowledge of the Star People, contact and even celestial origins (p165).  The integrity of these oral traditions impresses the author:

"Many of the ancient and original stories have maintained their fidelity through the generations, without contemporary interpretations.  Perhaps herein lies the real connection among indigenous peoples, Star People, and UFOs.  Researchers have, by and large, ignored narratives and legends or traditional people; only in recent years have some of these ancient stories and contemporary encounters been revealed.  Clearly, much still remains to be learned." (p175)

He then hints of secrets learned during his many interviews with tribal elders that he cannot reveal.  However, Ardy Sixkiller Clarke is not convinced that the AAT provides the answer to these mysteries; in fact, he thinks that it presents an arrogant, even "offensive" viewpoint regarding indigenous knowledge, culture and technological accomplishments (p179).  I would like to have explored his nuanced thinking further.

Another essay which really got me thinking was the one by Steven Sora, focussing on the myths of Troy and Atlantis.  He notes the historical propensity for earthquakes and tsunamis along the western Iberian coastline, and thus the potential for wholesale destruction of ancient sites in this region.  He presents thought-provoking, even compelling ideas about how Homer's writings may have originated from Phoenician legends of Atlantic voyages and conflicts several hundred years before Homer's time.  The epic scale of the voyages of Ulysses, and the descriptions therein, make much more sense in this context than a mere expedition in the seas east of Greece.

These ideas offer an interesting juxtaposition to those presented by Frank Joseph, in his excellent essay about Atlantis.  He offers evidence that knowledge of Atlantis was already part of Greek culture before Plato's time, citing the renaming to Atalanti of a partially-collapsed island in south-eastern Greece in 430 BCE, following an earthquake [actually 426 BCE?], when Plato was just two years old (p60).  Joseph also cites the earlier accounts of an Atlantis-type civilisation by the historian Herodotus, itself dating back over 10,000 years, that Herodotus also learned about from the Egyptians - an account which some argue Plato himself promulgated years later.

Joseph offers his own highly credible opinion about the location of the mythical Atlantis:

"Reaching into the Atlantic Ocean from its easternmost limits in the Gulf of Cadiz, the island's westernmost extent would have coincided with the Horseshoe Seamounts, a collection of underwater mountains which formerly stood above sea level as islands.  Notable among them is the Ampere Seamount, known to have been dry land as recently as 8000 years ago, if not much later, and the focus of Soviet oceanographers from the early 1970s to the mid-1980s, when they claimed to have observed grand staircases, building foundations, and stone walls on the slopes of sunken Mount Ampere." (p64)

In the leading essay in the book, Robert Schoch offers his thoughts on Zep Tepi, the "first time" as described by the ancient Egyptians, which he dates back to an era before 10,000 BCE.  He is well known for his dating of the Sphinx back towards this era, based on his assessment of its erosion weathering patterns, and he now thinks the Sphinx may hark to an era "back to the very end of the last Ice Age, circa 10,000 BCE" (p17).  He then goes on to explore the extraordinary antiquity of the site of Göbekli Tepe, in Turkey, which may extend back in time still further (p19), and how it may be connected with the transmission of esoteric knowledge down the millennia, culminating in the teachings of Gurdjieff.

As you can appreciate, this book's collection of essays can offer a bringing together of ideas which become more than the sum of their parts.  The format of the book also prevents the build-up of unnecessary padding, which so many books of this genre fall foul of.  The flowing river of ideas here is unimpeded by the common dumping of Google silt perpetrated by authors needing to stretch a single idea to 280 pages.

However, several of the other essays seemed out of place, even if they did offer interesting reading in their own right.  For instance, the closing essay by the highly popular Jim Marrs drew upon the concept of ancient bloodlines and inherited power and wealth down the centuries, and how these impact upon the mysterious machinations of the modern global economy.  Although he touched upon the Anunnaki as a possible original source for these bloodlines (p229), his general thesis concentrated more upon more modern times and protagonists, which seemed out of place here.

Similarly, the essay offered by the superb Nick Redfern on the paranormal appearances of hairy beast men in and around ancient sites in Britain was entertaining enough, certainly, but did not really fit in - even if he did try to link these sightings to the ghosts of Palaeolithic times gone past.

However, one can see the benefits of allying these popular writers to less well-known writers who have something more substantial to offer on the subject at hand, and thereby lifting their profile.  It's a format that works for me as a reader, and I gained much from this book in terms of new knowledge, ideas and an appreciation for some new writing talent.

Lost Secrets of the Gods

Lost Secrets Of The Gods