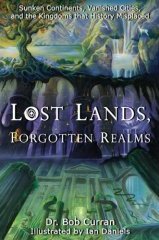 The busy front cover of this book shows off the exceptional artwork by Ian Daniels, whose many images glitter within its pages.  The book is as full of content as this cover suggests, and will not disappoint students of popular mythology.  Dr Bob Curran's previous works centred around gothic themes of vampirism and the undead, but this text has a gentler feel to it.  Although clearly based upon broad academic study and enquiry, 'Lost Lands' leads the reader into many delightful and fabulous mythical lands, as well as many lost realms of the ancients.

Although it covers the well-trodden paths to such places as Atlantis and El Dorado, the book comes into its own when veering off towards rarer pastures.  I will readily admit to knowing very little of such lost places as Hyperborea, St Martin's Land and Bethsaida.  But, courtesy of Bob Curran's eloquent descriptions, I am now a wiser man.

I particularly enjoyed his many tales of treasure in lost mines and subterranean lairs, and of the fantastic denizens of such places, who occasionally make their presence felt on the human-occupied surface of this world.  'Lost Lands' increasingly reminded me of parts of Jacque Vallee's 'Passport to Magonia', which is a treasured text on my bookshelf.  As a Ufologist, I find comparative mythology to be vital to our understanding of the study of aliens visiting Earth. Whether mythological creatures are one and the same as the entities encountered in more modern times is a moot point, but recognising the similarities in the stories and reports is all important to their study.  Many of the descriptions in 'Lost Lands' led me mentally towards reported alien bases on Earth, or the widely held beliefs in America of vast subterranean networks of US Government controlled tunnels and bases.

Although the book is more encyclopaedic than analytical, Bob Curran's background in psychology often showed through.  He suggests that the widespread belief in faraway, fantastic realms often fuelled exploration; tales of gold-laden palaces in rich, conquerable kingdoms, lost in time.  Explorers would set off across dangerous seas, or uncharted territories, in the hope of re-discovering the mythical realms. Often they returned empty-handed, more often they didn't return at all.  New myths would spring up about their alleged adventures, and theories would circulate about what became of them.  That would then drive further adventures by fresh hopefuls.  We seem fascinated by such tales, which of course, makes for great reading too.

Nowadays, there are few regions on the Earth that remain unexplored. Those that have not been overrun by Man still hold the same attractions; mythical monsters might lurk in dark lairs, or ancient civilisations may yet lie undiscovered in deepest jungles.  Our modern minds turn to pastures new these days: outer space, the deepest oceans, caverns underground.  Perhaps modern myths about these unexplored places hold the same tantalising attraction to us. I wonder, then, whether the great debate a decade or two ago about the Face on Mars, with its accompanying pyramids, generated the same excitement in us that was felt by the Atlantic explorers five centuries ago?  If so, then organisations like NASA have been disingenuous to debunk evidence for extraterrestrial life, or alleged monuments, on other planets in the solar system.  They should pay heed to the need for imaginative thinking to motivate the public mind towards funding space exploration.

After reading this book, I would argue that these lost realms are archetypal in the human psyche. The need to find them fuels exploration, and drives human ambition.  Perhaps modern exporation of space, based as it is on scientific endeavour, has grown up a little bit too much, and lost some of the magic of previous generations.  We need more Faces in the solar system, not less!  Bob Curran's book serves to remind us of the wonder felt when contemplating the unknown.

I really enjoyed 'Lost Lands'.  It is enhanced by some wonderful illustrations, too.  Clearly a lot of thought and effort went into its creation.  If I had a bone to pick with it, I would have liked to have seen some maps in the book, setting out the various locations described. This would have been particularly useful in the sections of the book devoted to lost gold mines, and such like.  Perhaps that might have motivated me to pick up my backpack and pickaxe, and get out there amongst them there hills...