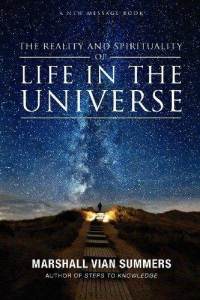 Subtitled: "The Reality and Spirituality of..."

After my damning verdict of Summers' previous book 'The Allies of Humanity' I was unpleasantly surprised to receive a review copy of his latest release.  While it gathered a little dust on my shelf, I got into some correspondence with one of his readers about the general thrust of his work.  She made a good job of presenting his material, and I was inclined to give his latest book a whirl, in the hope that his style and content had improved somewhat.   His writing has become more subtle over time, but I remain deeply unsettled by his material.

I've come to realise that he's marketing his book at the wrong people.  Instead of looking to the UFO/Alternative Knowledge crowd for his potential audience, he should be looking for wide-eyed followers who might otherwise get sucked into nefarious cults or potty movements of a quasi-religious nature.  Because, make no mistake, Marshall Vian Summers considers himself to be a Prophet of God.

His previous vocation as a 'teacher of the blind' seems a metaphor for his current, broader quest.  He regards this book as part of a stream of information coming to him from a higher spiritual source, when 9000 pages were received in just a few days.  It's true that great things can be created in remarkably short periods of time (like ELO's 'Out of the Blue' double album), but Summer's material is highly repetitive and offers us little new from previous writings (channelings?).  The relentlessly repetitive nature of the prose gave me the sense of an attempt at brainwashing, although that perhaps might not have been his intention.

The material within bears little resemblance to standard UFO paradigms.  It describes a galaxy full of disparate civilisations, widely separated by extraordinary interstellar distances, obsessing about a fear of viral contamination between them.  The nations in the Greater Community trade, tussle and compete with each other, like nations on Earth.  In many respects Summers' vision of the galaxy is like the European Union, only a bit more spread out.

He offers no factual basis for any of his claims.  None.  Indeed, the author attempts to make a virtue of this:

"Many people want answers.  They want to know dates, names and places.  But these are meaningless.  You will not be able to visit these places for a long time.  It is the perspective and understanding that are necessary.  Without this, no matter how much information you have you will not see the picture clearly." (p191)

Those pesky scientists with their trivial desire for facts and data!  Instead, the contents of Summers' teachings are faith-based; unverifiable and nebulous.  He claims that contact has been made with humanity by extraterrestrial civilisations - some of which pose something of a threat to us - but offers no narrative for this contact.  It's just a vague allusion to behind-the-scenes activity.  According to the author, this hidden contact, and the impending threat of more intervention from beyond our skies, is sufficiently troubling to create the need for his followers to "leave behind your past of living in confusion, dominated by the social forces around you and dominated by the mental environment in which you live.  Not everyone can travel with you up this mountain, and you cannot take everything with you." (p154)  The tone of this advice sounds worrying to me.

A more verifiable threat to us is that of declining resources; a common theme throughout the vast Cosmos, apparently:

"Your solar system will provide certain degrees of wealth and advantage for you.  But if you destroy the life-sustaining resources on the Earth, if you drive your climate systems into a different kind of functional stability that creates an inhospitable environment for life, you will not be able to escape this within your solar system. You will not be able to find reprieve of refuge." (p49)

Our world is finally waking up to this modern environmental fire and brimstone threat.  In so doing, Summers claims, we are already 'preparing for the Greater Community' (p37) where such problems are standard, if not entrenched.  But beware ET strangers bearing technological gifts, Summers warns, as such gifts come with a price.  Better to keep our cosmic heads down, ditch our devotion to technology and get back to God.  But not just any God, he warns further.  One thing that a broader, galactic perspective offers us is the realisation that our religions down here on Earth are provincial affairs, tainted by anthropocentric view of spirituality.  They have the right general idea, but are tarnished by localism, he critiques.  What's needed, then, is a new religion.  Luckily for the confused and anxious reader, the author steps forward as this new universal religion's first earthly prophet (p116) with his New Revelation (p185).

It's not clear in this book what our prophet's new army of acolytes is supposed to actually do, besides generally changing their view of their normal lives, even their kith and kin (p135, 154).  There are allusions to immersing oneself into the 'mental environment', which appears to be the medium of diplomatic and political intrigue in the 'Greater Community'.  I guess psychics make for good spies out there in the Cosmos, and we Earthlings had better sign up for Psychic Warfare 101 pretty sharpish if we know what's good for us.  I imagine that the Church of the Greater Community, or whatever name Summer's movement will eventually be known as, consist of like-minded folk doing some collective psychic exercises through prayer and earnest determination, to fend off the ET threat in the mental environment.

The material presented by Summers creates a milieu that would make for a good series of novels.  There is an impression of great complexity without any accompanying details, which novels would flesh out.  On a spiritual level, the work feels cold and calculating.  Far from Knowledge, I sense obfuscation and misdirection, perhaps even malefaction.  Which is great in a novel, but perhaps not so ideal in real life.