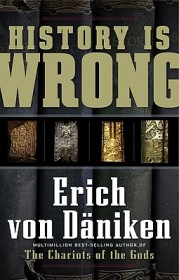 Erich von Däniken needs no introduction.  Since his seminal work 'Chariots of the Gods' was published in 1968 he has written dozens of books on the subject of ancient astronauts. He is a controversial figure, and his work invites scorn and derision from many quarters, particularly in the media and academic world.  Erich is made of stern stuff, however, and this new book shows how he takes much of the criticism levelled at him on the chin.  He fights back like a little pit bull terrier - tenacious, ferocious, and highly focussed.

I thoroughly enjoyed this new book.  I've always liked Erich's style of writing.  This is not the writing of a grandiose and pompous academic author, but instead comes across simply as the sharing of information from one normal human being to another.  The book is conversational in tone, despite the heavy-weight nature of the some of the material covered.  The claims may sound far-fetched to some, but they are delivered in a manner that sounds reasonable, and rational.  And perhaps that is why he is despised so much by many commentators and debunkers.  He has the common touch, and his books sell in their millions.  That level of success is not something that academic critics find easy to deal with - in comparison, their own works often gather dust on university library bookshelves, despite - or perhaps because of - the wealth of scholarship that goes into them.

So what does 'History is Wrong' offer us that is new - apart from its audacious title?  After all, with so many von Däniken books available one is tempted to wonder whether the genre is now full up to bursting point.

The book is split into three sections.

The first looks at the enigmatic Voynich Manuscript.  This untranslatable work, thought to have originated from the quill of Roger Bacon, has caused many a cryptographer a blinding migraine.  Not only is the text of the document still mysterious, but there are also many fantastic drawings in the manuscript that defy rational explanation.  This menagerie is rich pickings for researchers into the mysterious. Indeed, I have dipped my toes into that pool myself before now, because some of the drawings are astronomical in nature, and other pictures of plant-life in the text do not correspond with any known biology on this planet (see my article on the Sirius Mystery).  There is an excellent section of colour plates in 'History is Wrong' which includes puzzling pages from the Voynich manuscript.

Erich von Däniken makes a connection between this unique manuscript and the Book of Enoch, as well as some South American artefacts in the collection of the late Father Carlos Crespi. Although I personally find those connections a bit tenuous, the quality of information that the author supplies in his thesis is enjoyable to read and informative.  To my eye, the Voynich Manuscript is an alchemical work, and a more productive line of enquiry would be into the ancient lineage of alchemy.  Perhaps von Däniken has explored this before in another book - I'm not sure.

The second section picks up a theme explored in the first, namely lost libraries of knowledge in South America.  It is not surprising that there is a fascination with such lost treasures.  The knowledge base of the indigenous peoples of that continent was almost entirely destroyed by the Conquistadors.  So little remains, and it would be truly remarkable if an ancient indigenous library of wisdom was to emerge from a cave in Equador.  This is a now well-trodden path and von Däniken is not alone in his investigations.  In this book he publishes a letter sent to him from no less a figure than Neil Armstrong discussing a similar expedition he was personally involved in.  A modern astronaut in search of proof of ancient astronauts?  Not quite how Armstrong would see it, I'm sure, but it has a poetic ring to it.  Anyway, von Däniken's adventures in Equador brought him a lot of problems back in the early 1970s, and the author revisits that episode in his life in some depth here.

I remember reading 'The Gold of the Gods' some years ago, and it struck me at the time that the claims of an amassed collection of ancient metal tablets in a remote cave seemed quite outlandish, particularly as the horde described had still not emerged by the point I read about it, some 25 years on.  If such a horde really had existed, then it has likely been plundered and sold on to private collectors for great profit by now.  Sadly, we may never know the truth.  But what does come out clearly in the description given by von Däniken here is that he was quite justified to treat the story seriously, and pursue it for the potential knowledge it would give to the world.  Alas, his paper trail of witnesses, and their signed affidavits, is insufficient to convince the world that this was anything other than a wild goose chase.  Except, maybe, the Mormons...

The third section of the book was my favourite.  Saving the best until last, von Däniken describes a scientific expedition to the Nazca plain sponsored by his Erich von Däniken Foundation.  He asked for a series of scientific experiments to be carried out at the site of the famous Nazca lines, to do with soil composition and ground conductivity.  This work was successfully carried out by the scientists who went on the expedition, lead by a German Professor of surveying and Cartography.  The book discusses the anomalous results they obtained from the sites, which deepen the mystery surrounding the origins of the Nazca lines.  I find this work fascinating, and potentially significant.

At the core of the book is the sense of an author validating his lifework, and refuting his numerous critics.  He sets out his vision of an alternative ancient history (see page 151, the section entitled "An Alternative Interpretation") and shows that the questions he asks are as important today as they were forty years ago.  Whilst the 'Holy Grail' of South American artefacts remains tantalizingly distant, there is sufficient anomalous material in what we already have available to us to recognise a pattern of direct experience of ancient astronauts among various early peoples around the world.  Their monuments, their myths, their artefacts and their texts speak to us down the Ages.  We only need to shift our perspective slightly to see how ancient history may indeed be very wrong.