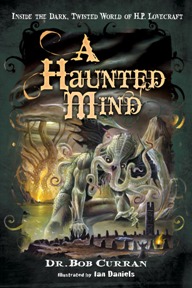 Subtitled: "Inside the Dark, Twisted World of H. P. Lovecraft"

Fans of the fantasy horror of H. P. Lovecraft will welcome this comprehensive book about him and his work.  Bob Curran has evidently laboured hard to collate an immense amount of information into 340 pages of packed text, supported by more of Ian Daniels' wonderful artwork.  The book begins with a contentious biographical analysis of the eccentric author, examining how, according to Curran, Lovecraft's formative years and subsequent bizarre personality and dysfunctional lifestyle shaped his fictional writing:

"...As a person, H. P. Lovecraft could not be counted as "normal" in any accepted social sense.  He was cosseted, selfish, and something of a sponger who placed his own needs above others.  He was emotionally stunted and was not even a good or trustworthy friend.  His vision was narrow, inhibited, and formulaic.  And yet, his influence on the horror genre has been immense." (p27)

Neurotic, prejudiced and dependent, Lovecraft's alleged weaknesses in his dealings with real people seemingly facilitated the creation of a fantasy world in his mind which he drew upon to build an extensive and unified cosmology known as the Cthulhu Mythos.

"It was possibly the narrowness and isolation of his life that provided the impetus for his vision.  Appalled and perhaps slightly overwhelmed by the pace and the harshness of the life around him, he had the ability to withdraw from it and to immerse himself in his own world... The fear of foreigners, the constant fear of hereditary insanity, and the fears of having to face the horrors of actual life manifested themselves in the strange characters and terrifying monsters, which stalk the pages of his fiction." (p337)

In our modern times, where authors themselves have to step into the media limelight, Lovecraft would have been a publicity disaster.  But, luckily for him, in his own time his literature spoke for itself - although one can hardly rate his publishing and sales record between the world wars as particularly successful.  It was after his death that his legacy steadily grew - his Mythos providing the blueprint for other genre authors to add their own novels and short stories.  One has to wonder whether the need to project authors into the limelight for public scrutiny these days might inhibit the recognition of socially dysfunctional writers whose fantastic work is their creative outlet.  Attendees of comic conventions might smile wryly.

Curran's biographical analysis aside (which has produced some sharp criticism on-line from Lovecraft fans), the bulk of 'A Haunted Mind' is turned over to the content of his work.  Curran presents the extensive bibliography of Lovecraftian tomes, the pantheon of barely pronounceable Lovecraftian deities and the gothic settings of Lovecraftian realms in great detail.  Each step along the way he examines the possible influences which Lovecraft drew from.  This gives Curran the opportunity to explore obscure and esoteric topics, as well as embarking upon his trademark story-telling.  For instance, he presents a potted history of magical and occult texts from Europe and beyond, drawing analogies with Lovecraft's own invented tomes, like the Necronomicon.  Some of Lovecraft's fans wonder whether such a tome may really have existed, a Rhode Island copy of which was accessed by the horror writer himself.  Such notions seem somewhat fanciful.

I must admit, as someone who knows little of this genre I became quite confused at times.  I found it difficult to know when Curran was describing a real-life mediaeval scholar exploring the esoteric literature, compared to one of Lovecraft's own historically-based characters used to flesh out the history of his fantastical tomes.  This was not helped by the fact that Lovecraft's milieus contain real-life locations and universities alongside fictional institutions.  When was a scholar based at the British Library real or fictitious?  Sometimes, I just could not tell.

Lovecraft increasingly brought science fiction into his horror, and Curran explored ancient astronaut themes (where Lovecraftian alien visitors often seem to have been fleeing from another place in the galaxy).  Obviously, writers like von Däniken, Sitchin and Temple came along some time after Lovecraft had died, so it was clear that the fiction writer was ahead of the game in this respect.  Reading between the lines, Curran is pretty dismissive of these latter non-fiction researchers, presenting the debunker arguments as 'job done'.  Compare this prevalent attitude to his remark about fictional ancient astronaut Mythos writers:

"And who is to say that they [Lovecraft, Walter DeBill, Denis Detwiller and David Conyers] are incorrect in stating that ancient aliens, somehow disguised as members of our own species, are moving and working among us - covertly observing us for their own obscure purposes." (sic)(p126)

In his books, Bob Curran often leaves open the prospect of a reality underlying the horror genre, tantalising the reader at the end of each chapter with a throw-away remark.  Yet, paradoxically, when dealing with evidence-based subject matter he is entirely dismissive.  Certainly, Curran's handle on horror is better than it is on astronomy, as his relayed critique of Planet X demonstrates (p130).  But his review of the fictional Mythos contains mention of an unknown race of beings who "ultimately inhabited a dark planet just outside the solar system..." (p205) and the 'Dark Star' in the constellation Taurus (pp 90, 125-6, 237), both of which will interest my Dark Star Theory readers.

There was another aspect of this book which grabbed me, and that was the link between Lovecraft's work and the Severn Valley in England.  Several influences on his work stem from the county of Gloucestershire - the location of Goatswood seems to be Lydney, adjoining the Forest of Dean, Templehill perhaps is Pagan Hill, near Stroud, and Berkeley (and its infamous toad) is directly linked to his literature.  I live in Gloucestershire, and found my local folklore contained in 'A Haunted Mind' fascinating to read about (including the 12th Century UFO encounter of one John of Naunton (p126)), particularly as it seems to have influenced the writing of an American author who never visited the area.  The Severn Valley is the central location for a more contemporary Mythos author, the Liverpudlian Ramsey Campbell:

"In Campbell's mind The Valley of the River Severn is a place of great antiquity.  Certainly there are ancient ruins along its length, some dating to the Roman period, and the river formed a significant thoroughfare through the west of England... What better place then for ancient entities to lurk?  What better setting for brooding Mythos tales?  Campbells' Severn Country - the haunted countryside of his own imagination - mirrors Lovecraft's own dark New England regions and perhaps it is none the worse for that." (p325)

As a ghost hunter in this part of the world, my interest in this aspect of the Mythos was piqued.  I imagine that readers living along the North East seaboard of the U.S. would be similarly intrigued by Curran's many descriptions of spooky, decaying towns in that part of the world.  Gloucester once again crops up, this time the Massachusetts version with its 'poor cousin' settlement of Dogtown influencing Lovecraft's Innsmouth.  Curran also suggests East Haddam as a place that Lovecraft based Dunwich upon.  Local knowledge of places and folklore influencing fictional work make a book like this come to life, and ghost-hunting in these areas would surely be great fun when bearing in mind the monstrous entities of Lovecraft's world!

Batman's Arkham Asylum aside, I'm surprised that Lovecraft's work has not influenced more movie-makers or video game programmers.  Surely his Mythos provides ample source material for some fantastic games and movies, in the same way that it has influenced so many other novelists?

Bob Curran's detailed examination of this horror writer's magnum opus provides a comprehensive resource for anyone exploring his fictional Cthulhu Mythos, even if his biographical analysis will not exactly delight Lovecraft fans.