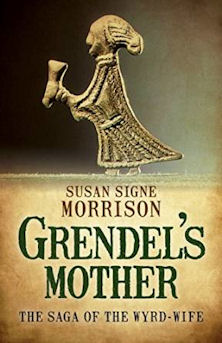 Subtitled "The Saga of the Wyrd-Wife"

The epic Beowolf was the earliest tale in the Old English language to pass down to us in manuscript form.  It tells the tale of the eponymous Geat hero's adventures in the lands of the Scyldings (~6th Century Denmark), as well as his own native Sweden.  Of course, the legend has many fantastic aspects, involving the conquest of monsters and dragons.  Such a slant was made the most of in the 2007 screen adaptation of the  epic poem, which starred Angelina Jolie as Grendel's Mother.  The monster Grendel was depicted in 'Lord of the Rings' fashion.  I say this to underline the difference between the movie and this novel which Susan Signe Morrison has crafted so beautifully and skilfully, using the original epic poem as ample source material.  Although the essential 'sword and sorcery' devices remain (and are, in many respects, vastly improved upon in her new novel), her approach to understanding the tale is woven into the history, culture and drama of the times.  The result is a gritty, no-holds-barred epic in its own right which retains some historical impact. 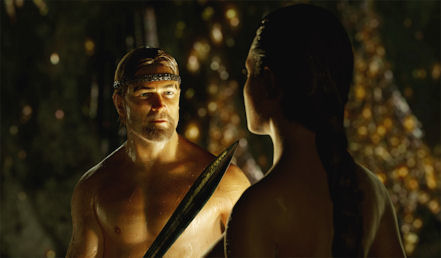 The author presents the guts and horrors of the time (much raping and pillaging) in a frank, open way, providing the reader with a compelling account of life in Danish society during the Dark Ages.   Living conditions were basic, and human life was cheap.  There was no room for sentimentality in those times of hardship.  The Germanic Danish tribes survived purely through bloody conquest of each other, and any other fledgling society within unfortunate reach of their longboats.  But the bloodlust created a never-ending cycle of destruction.  It is that corruption which concentrates the mind of the author in trying to understand the origins and motivations of the central characters of the original epic.

Her inspired interpretation provides a background tale which satisfies the modern mind's need to delve into what Beowolf might actually have been about.  Generations of oral rendition inevitably heaped layers of mystery upon the tale over time, and the author does a wonderful job of unpicking the mythical aspects of the narrative to deliver a powerfully human novel.

So who was Grendel's Mother?  Known more simply as Brimhild in this novel, the protagonist first arrives on Danish shores literally in a Moses basket, washed up onto a beach within the realm of King Hrothgar of the Scyldings.  Fate lends a hand to ensure the survival and nurturing of this foreign infant, as well as her eventual integration into the Danish King's court, such that it is.  Learning fast, Brimhild represents an integration between the old ways of the Scyldings and other Scandinavian/Germanic tribes, and the coming revolution of early Christianity as it spread inexorably across the European continent in the wake of the slow demise of Rome:

"The best way is both ways, the strength of the past embracing the mercy of the future."  (p193)

Brimhild gains much influence in her adopted society, largely through her pragmatic knowledge of the 'old ways'.  The author interweaves tales and lore of the ancient gods and heroes of Scandinavia into her story, reflecting the broad knowledge of the old gods understood and skilfully used by Brimhild, as well as their central importance to the social fabric of the society - which enjoys a short golden age.  Brimhild is also learned in the more obscure medical practices of the time, whose peculiarities are described luxuriously throughout the novel.  Many a witch's recipe is laid out, like a bizarre cookery book.  This skill of 'leechdom' becomes increasingly important for Brimhild's survival as her life, and that of her son Grendel, are suddenly plunged into crisis when her past returns to haunt her.  Betrayal and death follow, causing the kingdom to slide into crisis, and bringing forth the anti-hero Beowolf to clean the mess up on the politically-paralysed Hrothgar's behalf.   Beowolf and his band of thugs hunts down both outcasts in the watery mere, with mixed success.

This stirring reinterpretation is a 'creative response' to the ancient Old English epic, and makes much sense of the underlying mystery of the original poem.  Susan Morrison takes the story further, interlacing the epic with historical events in 5th Century Western Europe.  The author is an American professor of English, and has a passion for the languages of Old English and Old Norse.  Her elegant prose reflects elements of these languages, including its rhythm, whilst remaining accessible to the modern reader.  Many beautiful poems break up the text; often songs privately sung from one character to another, or set pieces provided to the court by bards, or 'scops'.  Throughout, well-considered allusions to the deeds of the deities and heroes of one mythos or another provide further colour and focus, in keeping with the original epic (pp207-8).  A helpful glossary and index of proper names provided easy reference to pick through these often unfamiliar tales.

Perhaps what is most striking is the utter brutality of the era, often brazen and purposeful.  I have pondered before how the old societies were driven by alcohol-fuelled binges of violence.  Water was usually unsafe to drink, and alcoholic beverages - ale, wine, mead - were thus part of the staple diet, even from a young age.  There were inevitable consequences to this.  Morrison's portrayal of court life in the Dark Ages reflects the drunken reality, where the mead-fuelled warriors held sway over all; Alpha-male drunks with no lawful restraints to concern themselves with.  The women inevitably suffered the consequences, time after time.  It is perhaps no surprise that they would be more sympathetic to a new, softer religion than their dominant, brutal men-folk.

To reinforce this inherent brutalism, the author does not shy away from graphic descriptions of the violence (both physical and sexual), nor from some very base language to underscore the drama.  In comparison, the movie version of Beowolf appears sanitised, lacking the crude savagery contained within this new novel.  It's surprising, in a way: an English Prof. doing 'Conan the Barbarian'.  But it works really well, transporting the reader into the Dark Age world of magic, mystery, pagan rites, human sacrifice, incest, ancient earth medicine and some unorthodox sexual appetites.  I expect that this particular author has not used this kind of material simply for effect, or to scandalise the work.  Instead, she has tried to paint a picture (more sew a tapestry, I suppose) of how life in those times was experienced, particularly from the woman's point of view.

I fear that the book's rather academic-looking cover may misguide the prospective reader, presenting a work that appears more formal and dry than is actually the case.  In fact, so dramatic is the storyline that I wondered how this reinterpretation might present as a film - after all, the ideas explored are gripping enough - but concluded that the subject matter was too coarse for Hollywood tastes.  The frequent dishonouring of women here is simply too sustained to be acceptable in that format, even if implied.  But as a novel it provides a powerful lesson in morality, and a contextual understanding of how Christianity - a self-evidently foreign religion - was able to take root so successfully throughout Western Europe.  Simply put, people were getting sick and tired of the relentless raping and pillaging and its sorrowful aftermath, and sought a new way.  In exchange, they put up with the slow relinquishment of the old ways, the building over of their sacred groves by the mausoleum keepers of Christ.

I really enjoyed reading this multi-layered work of historical fiction, and learned much about what we might refer loosely to 'Viking culture', or more accurately the earlier Danish Anglo-Saxon/Frisian/Jute raiders.  I was also invited to consider a valuable modern conceptualisation about how an epic like Beowolf may have been fashioned out of real events.  Susan Morrison is a masterful guide through this Dark Age epic, as well as being an accomplished story-weaver of passion and tragedy.