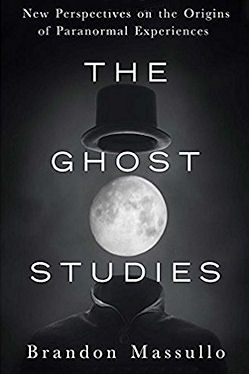 The author of this study on ghosts and hauntings is an academically trained psychologist who has worked as a mental health therapist for over 15 years.  Usually, that means 'sceptic'.  So, it's quite refreshing to find an open-minded yet reasonably scientific approach to this subject.

Within these pages, Brandon Massullo presents his own hypothesis on the nature of ghosts.  He argues his case well, presenting alternatives and counter-arguments, as well as useful examples and short case studies.  His writing is supported by plenty of good reference material, some of it academic and research-based, some of it more maverick and boundary-testing.  His balanced approach to this subject keeps the study's feet firmly on the ground whilst providing the opportunity to explore ideas which more academic scientific studies might normally shun.

The book begins with an overview of where ghosts and hauntings sit within paranormal studies.  The author is relatively sceptical of the modern portrayal of ghost-hunting through TV programmes.  He questions the basis for many of the investigative methods used by self-proclaimed ghost-hunters (there is no official scientific accreditation in this field), but is also open to the possibility that the appearance of ghosts have a basis in physical reality - at least, insofar as their manifestation relies upon a number of factors, one of which is the transmission of information through a physical medium.  So, there is a scientific basis for his ideas which should, theoretically at least, be testable.  We'll come back to that point later.

The approach he takes, then, is a reductionist one.  The manifestation of paranormal experience relies upon set of factors, he argues:

2) changes in internal energies of the body,

3) the acquisition of external information.

Crucially, the drivers of paranormal experience, the author argues, are heightened emotional events.  These might be psychic calls for help at the moment of death, for instance.  He examines the possibility that the body's electrical cellular and neurological systems essentially discharge a burst of information outwards through its bioenergetic electromagnetic field (pp66-7).  This interfaces with the planet's own magnetic fields, which provides a conduit of transmission over distance.

He argues that humans have a connection with one another which can allow resonance, or entanglement, between sender and receiver.  This may be the same resonant field that creates Carl Jung's 'collective unconscious'.  Hence, he says, we can have a psychic connection with loved ones which is particularly potent when the sender is experiencing a heightened emotional state.  So, mothers can suddenly fear for their children who are in mortal danger in another country at the precise moment of calamity.

This seems a reasonable proposition, but I was troubled by the need for this emotional jolt to drive the ghostly encounter.  If there is such an emotional element required within psychic occurrences, then why are so many experiences of ghosts and telepathy such mundane affairs?  It felt like the author was cherry-picking the emotionally charged cases to make his point - that the profundity of emotions is a powerful trigger for paranormal activity.  Nonetheless, when applied to such cases, his arguments had some momentum, and I could certainly see how this might be applied to PK and poltergeist encounters (pp54-5).  His point that ghosts might be the psychic equivalent of 'phantom limb pain' was well made.

In order for this ideas to have real traction, he needed to explore why two individuals might have such a psychic connection.  This is where he worked in the idea of resonance, or entanglement (pp92-3), stepping into a very loosely applied domain of quantum theory (although he didn't explore this in too much detail).  This allowed him to bring in a different dimension - one of time.  Not only could distances be overcome through this resonance, but ghost encounters could also be experienced through an imprint left within the environment's magnetic field, allowing hauntings to be played over and over again for unwitting and passive experiencers.

"If there is a "magnetic sense" present in all humans and magnetic fields are associated with ghostly encounters, perhaps those with an increased sensitivity to the environment would be more likely to have ghostly encounters." (p130)

In these cases, then, the intimate connection between transmitter and receiver is not required.  Instead, the experiencer (or 'percipient', as the author preferred) simply got an electromagnetic field 'jolt' from an imprint previously left in their environment, causing them to see a ghost or apparition.  This imprint might be from the emotionally-charged person in the first instance, or indeed from the entangled initial percipient of that psychic information, who would have been, presumably, emotionally affected by the experience themselves.

In this way, the author seems to cover all bases.  Except, as I mentioned, the mundane.  These, I suspect, he would be more sceptical of: the psychic doing readings, and acting as a conduit for the dearly departed, the statistical chance of you thinking about a someone just before they phone you for a chat, and so on.  Again, this is a kind of evidential cherry-picking, perhaps reflecting the kind of filtering-out of dull information we all do naturally.  But it runs the risk of losing scientific credibility.  After all, the testing of psychic activity necessarily involves objective, repetitive experimentation, far from the emotionally charged events the author draws upon to make his case.  So, too, then, the need to validate this theory under more controlled conditions.  But how do you ethically stimulate life-threatening situations in the lab?  Well, you can't.  There is a danger of this becoming untestable pseudoscience.

The final chapter on the book is particularly strong.  In this, the author sets out a series of rational explanations for the paranormal, ranging from psychological processes through to fraud.  He gently advises the reader to consider these first before jumping to a conclusion of paranormal activity.  Here, he seems to make a rearguard action of scientific rationalism.  The palpable excitement the author displays about his hypotheses in earlier chapters, which are themselves built upon the work of other researchers, like Michael Jawer, becomes more muted.  The author's psychology (and professional) training kicks in, as he brings his critical faculties to bear upon the parapsychology field in general.  But he also remarks that his position has shifted towards a more open-minded one in recent years, away from the default scepticism so rife in academic parapsychology.

I felt that this softer tone hit the right balance.  Although I think there's some truth to the idea that environmental magnetic fields can hold information, and that we, like some animals and birds, are capable of unconsciously accessing that information, I was not so convinced by the mechanisms that he provided in his thesis.  The generation of fields during emotional events should be recordable physically, allowing for experimental testing.  To his credit, he discussed all manner of scientific investigation into these matters, but these studies always seemed to be at the very periphery of scientific engagement with the phenomena in question.

There was also the matter of strength of effect.  Any field effect generated by the human body is inconsequential in comparison to the Earth's own burgeoning magnetic field.  So, surely any signal would be completely lost in the noise?  The author argued that the transmitter and receiver need to be in tune with one another, rather like when tuning into radio stations.  But, again, this effect should be in some way measurable - if not actually recordable.

So, to work, entanglement becomes some kind of quantum resonance.  In which case, why not just cut out the intervening medium altogether, and make the psychic connection a direct quantum link between the state of one mind and the state of another?  Thus, the 'transmitter' and the 'receiver' are nothing of the sort - they simply share a moment of conscious coupling.  You might have this interconnection of quantum states either over time, or over distance (probably not both).  And these resonance effects would likely be going on all the time, only we filter out the vast majority of the unconscious noise when it lacks any strong emotional content.  This makes more sense to me, although, again, this is hardly verifiable by science, as this is a purely a function of conscious awareness.  Perhaps it might be possible to set up an experiment where two people lie in brain scanners, and researchers watch for moments of precisely matched brain activity coincident with this conscious coupling?  Hardly a viable prospect in reality.

This book clearly got me thinking, and I found it very engaging.  Although I was not personally convinced by the author's thesis, he provided a wealth of really interesting and informative supporting material.  I'd definitely recommend this book to anyone thinking about the nature of ghosts and ghostly encounters.