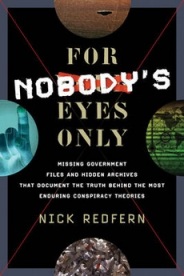 The modern Freedom of Information Acts developed in various countries can give the impression that democratic government has become more transparent, and that the media can probe historic files to get at the truth of whatever matter has been historically hushed up.  Of course, for any student of intelligence matters and government secrecy, it has long been apparent that governments have ways and means of circumventing said scrutiny.  In this book, prolific author Nick Redfern examines a number of celebrated cases where files that are known to exist have refused to surface, been destroyed or are simply 'lost'.  For advocates of open government, the contents of this book are bound to prove unsettling.

A concrete case in point is provided early in the book as the author discusses the disappearance of all the records pertaining to Roswell AAF from March 1945 through December 1949.  The organisation searching for this huge quantity of documents was none other than the U.S. Government Accountability Office.

"Moreover, that same documentation had disappeared under questionable circumstances.  When GAO investigators asked for an explanation, they were told by the chief archivist for the National Personnel Records Center that its staff had been unable to ascertain how, why, and under whose jurisdiction the files had vanished."  (p30)

Linked to Roswell through the whistle-blowing writings of Colonel Philip Corso is the case of the missing FBI file on the late Pentagon Foreign Technology desk officer himself.  It used to be available online, but disappeared from the FBI's online 'Vault' at some point.  Fortunately, Redfern had already downloaded the document before this happened and helpfully provides it within this book.  So what do we learn?  Colonel Corso had some strong opinions on the Kennedy assassination, which may have been the reason why the then FBI director labelled him as a "rat" (p36).  Maybe there were other reasons given his later exposition.

Redfern's background as a British UFO researcher become apparent in the chapter devoted to the government secrecy enshrouding the Rendlesham incident.  His discussion includes the work of three important figures in British Ufology, now all sadly lost to us:  Lord Hill Norton, Georgina Bruni and Graham Birdsall.  It is not just a 'huge' cache of relevant defence intelligence files that is missing (p49), but also more innocuous documents like the logbook from HM Prison Highpoint North that might provide corroborating evidence that evacuation plans were allegedly in readiness on those December nights when strange things were afoot in the Suffolk forest adjoining RAF Bentwaters.

Redfern goes on to describe many other celebrated UFO cases around the world where government files are now missing.  A pattern emerges which indicates either widespread government incompetence relating to archiving historic documents, or a need for long-term obfuscation and prevarication that undermines FOIA laws.  In their defence, government archivists often assert that historic documents were destroyed at a time when they were "perceived of being of no meaningful use or value anymore" (p108), although that seems highly unlikely in the cases that follow:

Redfern turns his attention to the conspiracy theories surrounding the premature deaths of various public figures: Marilyn Monroe,  Diana, Princess of Wales, JFK, Dr David Kelly.  His dispassionate, nuanced discussions display his talent both as journalist and historian.  That the ladies particularly were subject to intense intelligence surveillance is not in doubt - what has happened to the numerous documents that must have been generated by this scrutiny is far less clear.  Redfern highlights how cross-referencing between various agency documentation indicates where the holes are, and will likely remain.

I really enjoyed the chapter on Aleister Crowley, which seemed an odd inclusion on first sight.  But the author builds the case that the infamous occultist was doing a bit of side-work as a British Agent.  Not exactly James Bond-with-a-wand, admittedly, but nevertheless a fairly compelling scenario that he had working ties to MI5.  There's some evidence of missing intelligence files involving Crowley - even now, decades on.  Perhaps MI5 dislikes the idea of a link with someone with such a nefarious reputation, given their modern desire to project a good image of themselves.

I also found the chapter on MK Ultra highly illuminating.  To be honest, this topic is just so dark that I had always assumed that it had been over-hyped by anti-government conspiracy theorists.  But exist it most certainly did, irrespective of whether much of the extensive documentation of its work was lost during the 1973 fire at the national archives in St Louis.  Similarly, I was shocked by the allegation that disabled people were brought to the sites of nuclear bomb testing (e.g. in Australia by the British), and other alleged Cold War misdemeanours.  No wild conspiracy theory, this:  Widespread allegations of similar activities in the U.S. led to the setting up of an official investigatory committee by President Clinton in 1994:

"In the 1990s, a huge inquiry was launched in the United States to determine the extent to which unethical, and even illegal, testing of a radiation-based nature was undertaken on human guinea pigs when the Cold War reigned.  It turns out that extent was huge.  It also turns out that extensive digging uncovered the intriguing fact that masses of files on these experiments had taken a hike; to where, no one in government seemingly had a clue.  Either that or they weren't saying."  (p136)

The committee were largely frustrated by a lack of information forthcoming from various government organisations, perhaps unsurprisingly.

"Nevertheless, the documents that were found, even if they amounted to a fragment of the full story, led to the identification of nearly 4,000 human radiation experiments secretly sponsored by agencies of government.  They included: experiments with plutonium and other atomic bomb materials, the Atomic Agency Commission's program of radioisotope distribution; non-therapeutic research on children, and physically and mentally handicapped people who had been secretly taken from asylums; total body irradiation; radiation research undertaken on prisoners in American jails; human experimentation in connection with nuclear weapons testing; intentional environmental releases of radiation; and even research involving health effects on uranium miners." (p138)

Given that, who can wonder at the desire of government to keep some secrets wrapped up forever?  The West is perhaps the strongest political advocate internationally for human rights these days, but some of its own history is dark to say the least.  Governments not only want, but need to keep their secrets, yet are entirely comfortable with their own work to undermine just about everyone else's.  As Corey Taylor's rock band Stone Sour wrote:

"Sanctimonious pretentious dastardly bastards with their thumb on the pulse,

and a finger on the trigger.

CLASSIFIED MY ASS! THAT’S A FUCKING SECRET, AND YOU KNOW IT!

When I read about the human experimentation and its decades-long cover-up, I too felt that same sense of anger.  Yet, despite the rather unpalatable truths described in this excellent book, Redfern manages to remain fairly dispassionate (or at least, that's how he comes across).  In his concluding comments, he offers some quite reasonable justifications as to why government agencies may have permanently put various vitally important files beyond public access forever.  Really, though, they do it simply because they can.