Evidence of the Gods 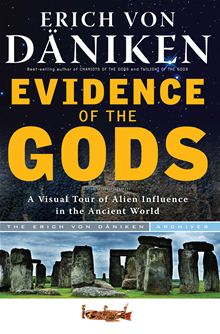 Subtitled "A Visual Tour of Alien Influence in the Ancient World"

Erich von Däniken's collection of books now stands at over 30, and he points out in the introduction to this new book that many of them are out of print, or hard to get hold of.  He plans a series of new books - The Erich von Däniken Archives - of which this is the first volume.  In these books he will incorporate some of the less well known material he has introduced the world to over the last five decades, as well as reassessing some of his better known mysteries in the light of new findings.

Evidence of the Gods contains over 150 colour photographs from his photographic archive.  The author is a prolific traveller, trotting the globe in his relentless hunt for new evidence of the visiting extraterrestrial gods.  In this volume, there is a strong emphasis on a re-examination of Palaeolithic sites, especially in the South Pacific and the Pacific rim of the Americas, and Europe.  His hope is to step beyond the isolationist, reductionist models of traditional academic archaeologists - instead, he draws parallels between rock drawings, huge ground markings and monuments found in disparate zones that science considers have no business being compared to one another.

"There can be no dispute: be it in South, Central, or North America, the native populations clearly operated a cult of mighty geoglyphs.  Equally beyond dispute is the fact that the large majority of these geoglyphs are only recognisable from the air.  Scientific work should look beyond its narrow local confines." (p121)

I think his study is a little like comparative religion - a process individual religious practitioners mostly shun, but one which secularists find illuminating.  Von Däniken does a similar job on this "comparative archaeology".  Archaeology is generally isolationist, he notes, and is "rarely intercontinental" (p115).

Such considerations lead him to ask, credulously, whether the Easter Island statues were souvenirs of Germanic visitors 1500 years ago (p54), and he draws comparisons between South Pacific myths and better known stories from Egypt and the Bible - a study rarely undertaken by ethnologists.  Where comparisons are made by academics, they are generally done so from a psychological point of view, most likely with a Jungian slant.  Von Däniken rejects this approach with a degree of antipathy that mirrors that of his own critics:

"These psychological explanations not only stick in my craw, they are also totally divorced from reality. They attempt to destroy the common narrative of ancient peoples with the drip of psychological acid.  All that remains is meaningless smugness."  (p20)

This passion explains von Däniken's enduring popularity, I think.  His critique of science's complacency in the face of the great puzzles of prehistory is compelling.  Whether that means that every example of 'ancient alien' art, design and construction is accurate is another matter entirely.  Many of the petroglyphs that he records photographically in this book are indeed suggestive.  But in his enthusiasm he also gets drawn into controversies that he perhaps would do better to leave well alone.  For instance, he strongly defends the genuine antiquity of the huge geometrical ground markings at Palpa, which bear some resemblance to those at Nazca.  But, like the English crop circle phenomenon, there is plenty of scope here for localised hoaxing.  I fear he is pinning his colours to the wrong mast here.

Yet, he can also amaze.  The immense avenue of pockmarks at Hacienda Monte Sierpe, near Pisco, is truly bizarre - even if it might have a natural explanation.  I have not come across this phenomenon before.  Von Däniken's credentials as a travel guide of the weird and wonderful is enhanced greatly by such detailing in his work.  Combined with the excellent imagery, some of the book feels like a travel guide tempting the reader off-piste by some margin.

Another example are the marker stones on the Arorae island in the South Pacific, which line up to point at other distant Pacific islands.  Did the islanders have compasses?  Yes, one local exclaimed to the Swiss visitor; compasses were provided to their forefathers "by a god" who "had been so large and strong that he could pick coconuts from the crowns of palm trees and also crush them in his hand" (p32).

Other lines of megalithic stones also intrigue the author - this time on the western seaboard of Europe.   Von Däniken records and describes without drawing strong conclusions in this case.  Perhaps wise.  I'll quote the architectural critic and broadcaster Jonathan Meades here, whose own conclusions are eminently sensible on these very ancient European sites:

"Whatever Carnac, Callanish, Stonehenge stood for is forgotten.  These sites may have had nothing to do with cosy supernaturalism or worship of coarse fictions.  Their material survives, just as words remain when shorn of didactic nagging." (Museum without Walls, 2012, pxv)

I also noted a more nebulous tone to Von Däniken's entire book.  Rather than presenting any one piece of evidence as 'proof positive' or as a smoking gun, the author instead creates a pageant of oddities and anomalies, and invites the reader to join the dots.  Ancient astronauts are hardly mentioned at all.  Rather, they are implied, their potential purely osmotic.  But then, the nature of this paperback book is more photographic collection than thesis and, in that sense, compliments his previous books (some of which this aims to replace) rather well.

Evidence of the Gods

Evidence Of The Gods