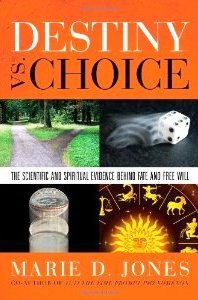 Subtitled "The Scientific and Spiritual Evidence behind Fate and Free Will"

Like the nature vs. nurture' debate, the subject matter of this book is one of the primary concerns of philosophy.  Marie Jones covers a lot of ground in this book: From rigorous academic debate about determinism versus free will, to dreamy New Age speculation.  She incorporates short extracts from some of the books she has read on the subject, many submitted for inclusion by the various authors themselves.  The reader is left to decide which side of the fence to end up, with Marie encouraging us on from her position sat on it.  Her conclusion is that destiny is real, and choice is how we get there.

Jones starts the book with the most demanding material.  Moving through academic philosophy to the writings of Christian philosophers and then to comparative religion she summarises vast subjects in vary succinct passages.  Looking at the determinism versus free will debate, she respectfully concludes that many great minds have pored over this ground and have yet to arrive at an acceptable consensus.  She looks then to religion to provide some direction, concluding that the concept of God as First Cause offers some hope.  Christians argue that humans have been given free will to choose whether to act in accordance with God's will, or face the consequences.  She compares this viewpoint with related offerings by other world religions, doing a particularly good job with Islam.

The writing is clearly built upon some strenuous background research.  Conscious of how dry this material can be, Jones lightens the mood with occasional humour and anecdotes.  The experience of reading the book is a bit like meeting a student friend at a University cafeteria to look through some lecture notes over a coffee.  Mixed into the academic discussion are plenty of personal chat and gossip.  Things go off into more eclectic fields as the topic of conversation moves to divination, as Jones looks at Numerology, Tarot and Astrology (our college café chat includes reading the tealeaves and looking through the stars in the daily paper).  Can such subjects be taken seriously, the author wonders?

Science is then turned to for answers and the arguments of Rees, Davies and Haisch are taken up.  Has science proved that the Universe was set up to provide the wonderful complexity we behold?  Is the complex universe merely one gem in an infinite sea of duds in a Multiverse?  Or is there a guiding hand to Creation?  How does complexity arise from a succession of seemingly random events?  Jones points out that Science is not set up to discover pre-destination, by its own definition. Yet some eminent scientists like Rees have concluded that within the maths of the Universe, something remarkable is indeed going on.  Moving into her specialist territory, Jones superbly describes the complex scientific arguments and resulting abstract notions that emerge from decades of work in quantum theory:

"Reality is up in the air, ever in a state of probability and superposition until a choice is made to "collapse" it into a fixed, measureable, manifest form.  Particles exist in a state of virtual existence, amid a sea of quantum foam, popping into and out of existence." (p102)

At this juncture I would have enjoyed a jaunt into chaos theory, which I suspect also has a lot to offer this debate.  But Jones seems unsure of whether science really holds the answers.  She seems to be saying that it's nice to think that life is not just driven by random chance playing out in a material universe, but that there is some meaning to it all.

In her desire to discover meaning, she diversifies out into Buddhist and Hindu beliefs about reincarnation, and various New Age interpretations about the destinies of our souls.  In the end, the influence of her Christian background seems strong, fighting an internal battle with the knowledge gained from her reading of scientific enquiry.  And in that sense, Jones's internal struggle reflects that in many of us.  I can relate to the long battle between knowledge and faith.  Like Jones, I don't consider agnosticism a compromise, but instead a reasoned position to uphold in a mysterious world.

Jones admits that this was a tough book to research and write.  She has certainly done a good job with bringing so much diverse material together.  I was perhaps less impressed by some of the supporting material offered by the community of authors she seems involved with.  Her own writing was too often interrupted with short articles by other authors, essentially promoting their books (like other students in our café analogy wandering over to our table to show us their essays) .  It was unnecessary filler in a book which crammed centuries of intellectual debate into relatively short passages.  It would have been better to expand out her own background material and analysis, and skip the book promotions.