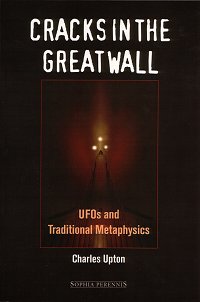 This is a strongly opinionated book which aims at explaining the nature of the UFO phenomenon.  It is written by an author who is well-versed in comparative religion.  Despite a rather eclectic background of spiritual development in the past, Charles Upton now represents a more or less orthodox religious ideology.  This ideology seems to be predominantly Christian, but his metaphysical system is also coloured by other mainstream religions, like Buddhism and Islam.  He is clearly very well read, and his rather polarised excursion into the field of UFO research should be generally welcomed.  His conclusions are, however, somewhat mediaeval.  He also has a rather scathing attitude towards those who now walk a path he seems to have once trod upon himself.

In trying to understand the nature of UFOs, Charles Upton argues that neither physical nor psychic explanations alone can ever hope to offer a plausible or satisfactory understanding of the phenomenon.  The UFO reality not only bridges the murky area between them, but in fact threatens us with a dangerous vision of lower demonic realms.  Essentially, Charles Upton offers us a vision of Armageddon, alien-style.  Our fascination with UFOs is a symptom of the post-modern disease which is allowing demonic forces to gradually sap our common humanity, leading our planet and civilisation towards great spiritual peril.

Of course, not everyone is likely to agree with this thesis. I don't, for a start.  There is a rather arrogant dismissal of any possible critique of the viewpoint extolled within the pages of "Cracks in the Great Wall".  If Upton's solution is unacceptable, then that is because there must be fault found with the doubter.  The solution itself is paraded as absolute Truth, based as it is upon Scripture and metaphysical analysis by a member of the Faithful.  To my mind, this drops the whole package into the realm of pseudo-science, of a religious bent.  If his thesis is beyond the ability to be disproved, then it cannot be remotely scientific.  The author would probably not be too bothered by this assertion:  He presents quite a lot of critical commentary about science, and modern materialism in general.  It is not really his purpose to present a scientific case, and his overview of Ufology is not exactly broad either.

Saying all of that, Charles Upton makes some excellent points in his book. He presents a scathing critique of the moral redundancy of the work of the late Dr John Mack.  Why, he asks us, can we not see the evil intent behind alien abduction?  Are we so blind in our post-modern, secular world that we have lost sight of spiritual danger?  He equates aliens with demons, abductees with victims of demonic possession.  It is not psycho-therapy that is required, argues Charles Upton, but exorcism.  He laments the passing of traditional religious values through the rise of secular modernism, and the consequent lack of spiritual ammunition to face off the demonic threat posed by 'aliens' in our post-modern world.

Additionally, his highly focussed analysis of the film "Roswell" is worth reading, containing many valuable insights about the subliminal weaving of messages by film-makers in general, and Steven Spielberg in particular.  Charles Upton thinks that Spielberg's work in the alien/UFO field is pure Satanism.  Which is possibly a little harsh.  Fortunately for Spielberg, he appears to be in good company:

"ET...regularly produced a kind of maudlin, pseudo-religious reaction in people to whom all normal religious emotions were apparently foreign - but there is nothing in it that can't be explained by the generally accepted anti-clericalism and aesthetic satanism endemic to Hollywood culture." (p43)

There's a political figure in Northern Ireland called the Reverend Ian Paisley who reminds me a little bit of Charles Upton.  Both are consumed by Absolutism; no middle way or grey areas.  Just self-righteous condemnation of the opposing forces as being in the league of Satan.  Bizarrely, Ian Paisley is a very popular politician amongst Unionists in Northern Ireland at the present time, so who's to say that the work of Charles Upton might not also capture the 'Noughties' wave of neo-conservative thinking, even in a subject as off-beat as Ufology?  After all, it has been argued before that the New Age movement is fundamentally right-wing in its nature. (Perhaps this is why it appeals to so many cranky radio stations across the American continent.)

You see, given Charles Upton's scathing condemnation of those interested in Ufology, as brainwashed cultists subsumed by demonic forces, one wonders why he ever sent a copy to us for review?  He can't have been expecting plaudits from us, surely?

Perhaps he sent it ironically;  for his own sanctimonious entertainment (he listed our phone number as 6666 666666.  Clearly erroneous; he included one too many 6's).  Or maybe it was his publisher's idea, who no doubt hopes to make a fast U.S. buck on the back of a perverse marketing gimmick whereby a fundamentally orthodox critique of UFOs is plied to damned heathen Ufologists.

But as we in the UFO field already realise; there's no money in it at all. Sorry, Mr Upton.  Even if I criticise your book in the most outrageous terms, it will not help your sales at all.  Everyone stopped paying attention a long time ago, back when David Duchovny hung up his alien-hunting boots for the last time.  Even the adage of "any publicity is good publicity" fails when there are practically no recipients of that effort.  It also doesn't help that you're asking $18.95 for a mere 88 pages!   Not exactly value, is it?  Even if we are all Satanists, as you infer, we're not exactly made of money.

As you can see, "Cracks in the Great Wall" is thought-provoking enough. I actually found myself enjoying it as a piece of philosophical rhetoric; I just took some of the overtly religious sentiment with a pinch of salt.  Serious UFO researchers should perhaps read this book, if only to gain an acutely different perspective.  And if you're a Bible-bashing Christian who sees the work of the Devil around every corner, and occasionally in the sky too, then it's got to be for you!