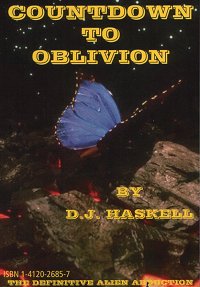 Although this is sub-titled as ‘The Definitive Alien Abduction’, it is actually quite difficult to define what category of book this lies within.  On the face of it, the book is the account of an anonymous alien abductee.  But I don't think it's quite what it seems.

The Author starts off by providing us with an account of him meeting a man, who he calls the Stranger, who provides him with a large bundle of manuscripts in a pub.  The Stranger makes the Author promise to write this up as a book and publish it, which the latter agrees to in his drunken state.  Perhaps this is a trick would-be authors could  try themselves with potential publishers?

This then brings us to the main text of the book, which is a rendition of the Stranger’s manuscripts, bolstered by a lot of reference material from various scientific and historical texts.  The Stranger writes his account as a confused abductee who is taught by human-like aliens in their spaceship.  The sessions have a dream-like quality about them and are certainly bizarre.  The aliens have a rather pedagogical approach to teaching.  The whole thing has the feel of one of those educational T.V. programmes aimed at secondary school kids; the material being taught is rather dry and complex, so needs a wild context to grab the attention of the audience.  In this case an alien teacher.

But this book is not aimed at children.  Its target audience is presumably adult.  So, whilst the pedagogical format of the main body of the text seems somehow inappropriate, the information being imparted should prove quite interesting to many grown-ups.  Certainly more interesting than you’d get in a typical school lesson, that’s for sure!  I found that the complexity of the various levels of interaction D. J. Haskell has provided in this book tend to get in the way of the message he’s trying to get across.  The alien abduction scenario seems to be a rather artificial vehicle to convey his popular science and alternative teachings.  “Countdown to Oblivion” is actually one of those “A Brief History of Everything…” books, with a heavily alternative slant.  I would have preferred the information presented in a more straightforward way, to reflect that. In all honesty, the abduction scenario painted comes across as rather unconvincing.  Others may differ in their assessment, of course.

That said, there’s plenty of entertaining source material in the book, and the author is reasonably well-read, judging from his bibliography.  “Countdown to Oblivion” also includes eight appendices, which are generally physics-orientated.  The philosophy of the cosmology discussed in the text is also quite up-to-date, reflecting the Multiverse and intelligent creation theories in particular.

Sir Martin Rees presented similar material in his recent television programmes about the Cosmos.  The difference between Sir Martin Rees and our alien tutor on board his classroom spaceship is that the Astronomer Royal didn’t keep saying “Look, this stuff is too complicated for you, Earth-worm, so just accept what I’m trying to tell you and shut up, okay?”

Thinking about it, though, maybe that’s what Sir Martin’s undergraduate seminars at Cambridge Uni are like, too??  Anyway, D. J. Haskell fills out those annoying alien assumptions of Earthly ignorance with his system of well-researched appendices.  His book is filled with interesting titbits of knowledge, many of which I have not come across before.

He also presents some new ideas that are clearly his own pet theories.  For these reasons, this book is worth delving into. You just have to take the abduction scenario with a large pinch of salt.