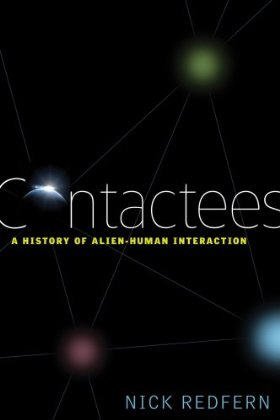 Subtitled "A History of Alien-Human Interaction"

Nick Redfern's move to the USA was a big loss to British Ufology. He used to write book reviews for UFO Magazine, in the glory days when the Birdsall brothers were riding high.  It feels ironic to be reviewing his book all those years later!  His first two books are still on my bookshelves. They were informative and fairly serious texts on UFO secrecy, and written in a more academic manner than this newer book.  I'm not sure I like Nick's shift in style to a more folksy prose, but I think it's fair to say that he is simply following a more generalised trend.  What is retained from his earlier work is his cutting analysis and erudite commentary.  He just presents it in a different way.

The Contactees were always a controversial subject, even within Ufology.  These are people who claimed to meet with human-like aliens and undertake various B-movie style adventures with them - from flights to other worlds, to sex in a flying saucer.  The author covers the most celebrated cases with clear, entertaining narratives.  The most famous of all, George Adamski, is viewed shrewdly - there is clear evidence of fraud in the FBI files, but the agency had to tread carefully to prevent the self-publicising UFO guru from becoming a popular martyr for the subject.  The author is well acquainted with researching the FBI files, and that interest is in evidence in this book.  He makes use of long quotes from declassified files, as well as a great deal of source material from other researchers' books and commentaries (e.g. Moseley and Bennett).

It is clear that the Contactee movement stirred debate within the FBI.  Redfern considers it likely that this seemingly unlikely interest is due to the communist overtones of the Space Brothers' civilisations.  Adamski's proclamations were essentially un-American, and provoked strong complaints from members of the public to the Agency during more paranoid times.  The FBI's intervention was haphazard - and sometimes half-hearted - but included infiltration of the UFO movement, with agents submitting long reports about the topics discussed at lecture and conference events.

This was particularly the case with George van Tassel.  His story is remarkable.  Like a Biblical hermit, he made a home in a cave set within an eponymous giant rock in California.  He built the Integratron in the years up to 1959, a rather unique structure in the desert which was constructed to aid meditation, and for communing with the alien visitors.  Constructed entirely out of wood and concrete, "without the benefit of even a single nail or screw", the Integratron still stands today, despite the effort of powerful earthquakes.

Where one might be tempted to be quite impressed with a man of undoubted vision like van Tassel, many of the Contactees are of more dubious character.  Redfern's book offers something of an exposé, from the small-time fraudsters to the downright sinister leaders of cults.

"For the most part, immersing oneself in the UFO arena is a relatively harmless - although very often life-changing - experience.  As the affair of Heaven's Gate acutely demonstrates, however, sometimes the world of the flying saucer can be downright deadly." (p152)

The final chapters of the book are devoted to various theories about the Contactee experiences.  It is interesting that there appears to be a cultural bias to the phenomenon, particularly regarding the appearance of the aliens.  Redfern quotes statistics that show that the Nordic-type aliens are more likely to be encountered by Europeans and South Americans than North Americans, who tend to experience the Greys (p161).  In a way, this really sets the Contactees apart, because many of the most celebrated cases are American in origin, where encounters with the Greys should predominate.

The author presents an excellent and open-minded overview of various strands of research into the phenomenon:  Narcotic drugs, hypnogogia, meditative trances, earthlights and the effects of DMT are all analysed thoroughly.  There is a folkloric element at play here, too, and he sensibly brings Jacques Vallee's seminal work into the equation.  Redfern even considers evidence that government agents were planted to spread ridicule amid a subject that was gaining popular momentum in the US.  There are even darker possibilities, with accounts of mind-control experiments conducted on unsuspecting folk in isolated rural areas (as in the case of Villas Boas).

In the end, Nick Redfern seems to avoid a definitive conclusion.  His generally sceptical air indicates he is tackling the subject as just another of his enjoyable paranormal romps.  But I know that he is also passionate about the UFO subject, and there remains an under-current of serious enquiry.  Perhaps there is some doubt in his mind that the entire subject can dismissed out of hand, as would seem sensible from a more sceptical viewpoint.  I think that hesitation to find fraud around every Contact corner is laudable, and provides the right balance to this book.

I've often wanted to read a book devoted to this subject, and 'Contactees' does not disappoint.