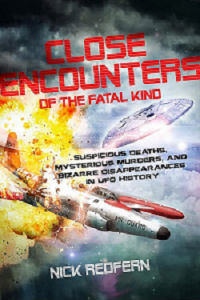 Just because you're paranoid it doesn't mean that they're not out to get you.  I don't think author Nick Redfern actually made use of this well-worn phrase, but that was surely the core message at the heart of this book - at least, if you're into UFOs, that is.  And, to be fair, by the end of it, you are starting to wonder exactly who that stranger was who gave you a weird look across a crowded public space, or whether the shadows in that doorway hide a murky figure with malice in their eyes?  Those of us with a paranoid disposition within the field are assuredly not going to be feeling better after reading this book (apart from enjoying Redfern's consistently excellent literary output, of course!)  Indeed, an urgent review of one's Life Assurance cover might seem the most appropriate course of action.

As is usual with Redfern's writings, he works through the grim trail of unexplained deaths, M.I.A. pilots and unexpected 'suicides' in chronological order.

So, we start with deaths connected with the investigation of the very first modern UFO encounter in 1947, and then pick through the debris field of murky deaths associated with infamous Roswell incident, also of that year.  Redfern highlights the declassification of a document entitled "Bacteriological Warfare in the United States", released under the FOIA in 2006 (pp25-8).  It pinpointed an outbreak of a plague-like illness in New Mexico in the late 1940s, inclusive of Lincoln County, the exact area where the alleged flying saucer crash took place.  This offers corroboration for previously leaked MJ12 documents (all of which remain contentious) which discussed biological threats and the tragic death of up to 4 technicians at Sandia National Laboratories in 1947.  Remarkably, the FBI investigated occurrences of an emergent deadly disease in New Mexico in the late 40s/early 50s, producing reports important enough that copies were sent to top National Security directors.  Did a crashed E.T. craft bring an unknown fatal illness to New Mexico on 1947?  Or was officialdom simply concerning itself with a potential biological threat from the Soviet Union?

It seems fair to say that the paranoia of some top security brass knew no bounds.  Redfern highlights the alarming circumstances behind the deaths of two men, James Forrestal and Frank Olsen, both of whom became psychiatrically disturbed allegedly as a result of their highly sensitive work.  According to a 1950s CIA manual, also released under the FOIA, one of the most effective ways to assassinate a target without raising suspicion is to fling them from a top floor window, a fate both these unfortunate men shared.  When men in power who know too much start to go off the rails, then what better way to dispose of the threat they pose?  Their growing paranoia strengthens the argument for suicide verdict, even if the behaviour they exhibited just prior to their fateful fall seemed to indicate a different frame of mind altogether.

Later in the book, the author offers further evidence of this chilling modus operandi, this time in combination with the use of mind-altering techniques through drugs, etc. (pp111-2).   Certainly, the average life expectancy of a significant cohort of computer programmers and engineers working for the British electronics firm Marconi was several decades short of normal in the 80s and 90s.  They had been involved with work connected to the American Strategic Defence Initiative at the time, and the multiple cases of bizarre suicides led to questions being asked in the highest political circles, as well as the British media - although no official inquiry was ever undertaken.

"The deaths detailed here are merely the proverbial tip of the iceberg when it comes to the matter of the Marconi affair.  To date, the number of British citizens with ties to Marconi who ended up dead under questionable circumstances between 1982 and 1991 is in excess of 30.  For officialdom, suicides, accidents, and natural causes were the only answers.  Not everyone was in accord with that unswerving stance, however." (p177)

Indeed, the whole subject is ripe for the attention of conspiracy theorists, whose own ability to create a tangled web of supposed intrigue can be used by savvy politicians to dismiss a very real threat to life and limb from assassins unknown.  Yet, recent years have shown only too well how many skeletons can lurk within Establishment cupboards, and how sometimes conspiracy theorists are proven right.

Redfern highlights how sometimes the same names cross over between conspiracy genres - murky characters pop up in UFO cases who also have connections with the JFK assassination, for instance:

"It may sound incredible, yet, as we have seen, undeniable UFO threads run right through pretty much the entirety of the Kennedy assassination saga.  And hiring people who may have been in on the UFO secrets from the very beginning in 1947 - specifically [Guy] Bannister and [Fred] Crisman - and who understood the need to maintain the saucer-filled status quo, makes even greater sense." (p97)

Another strand explored in the book is the tragic legion of military pilots who have been killed while pursuing, or being buzzed by, UFOs.  On occasion, this might be put down to misadventure, as in the famous 1948 case of Captain Thomas Mantell of the Kentucky Air National Guard who pursued a UFO to an altitude sufficiently high where he might have simply blacked out.  Other tragic deaths seem to have been connected with a loss of instrument power when UFOs draw near.  Some planes in close contact to UFOs simply disappeared, as in the Fred Valentich case over the Bass Strait in Australia in 1978 (wikipedia.org/wiki/Robert_Charroux).  Such events highlight for me the considerable dangers associated with UFOs - especially for aircraft - contradicting the general government line that UFOs are of no defence significance, or pose no threat.

Other direct threats from UFOs and their occupants include sensational stories of human mutilations - the kinds of terrifying events that are warned against in a 14th October 1976 FBI memo discussing the rash of cattle mutilations occurring at the time (p134).  And then there are the radiation sickness incidents that close observers of UFOs have been subjected to, that on occasion may have ultimately led to their deaths.  Redfern highlights the case of Betty Cash and her friend Vickie Landrum, who were exposed to a significant dose of radiation from an unknown object which blocked their passage along a road at Huffman, Texas, on the night of 29th December 1980.  This well-documented case may well have its solution in another UFO incident, this time in the UK.  That the Texas incident occurred just days after the famous Rendlesham Forest case is sufficient pause for thought, without the fact that another common strand between the two is the 67th Aerospace Rescue and Recovery Squadron:

"Both the Huffman and the Rendlesham events occurred at the same time.  The Cash-Landrum case had an emergency-response component in the form of a squadron of helicopters, albeit admittedly one from who knows where.  RAF Woodbridge had its very own such unit: the 67th Aerospace Rescue and Recovery Squadron, which had ties to the Houston, Texas-based Lyndon B. Johnson Space centre, which, at a distance of only 47 miles from Huffman, makes matters all the more intriguing." (p165)

Was the dangerously radioactive object, which caused such a stir in Rendlesham Forest just a few days previously, covertly shipped over to a secure site in the USA, only to be unceremoniously dropped in transit into the path of the unsuspecting motorists, one of whom ultimately succumbed to the lethal does of radiation exposure?  it's a scary scenario indeed, but one seemingly borne out by the facts.

Finally, building upon the earlier work of researcher Otto Binder, Redfern discusses the many times when the date of death of Ufologists, or those connected with UFOs, have occurred on the same date: 24th June.  The significance of this?  That date was the one when the modern UFO era first began, with the Kenneth Arnold sighting on 24th June 1947.  Since then, 24th June has seen more than its fair share of UFO folk leave this mortal coil, surely by now beyond a mere statistical blip?  One of the unfortunates in question is the Frenchman Robert Charroux, an ancient astronaut theorist I was not acquainted with, but should have been - he was a forerunner of von Daniken (members.ozemail.com.au article).

Altogether, this is a most unsettling book.  It's fair to say that if the authorities want to bury a story in the eyes of the mainstream media, then associating it with UFOs is as good a way as any to achieve this.  But the fact that real people have lost their lives in either the pursuit of actual UFOs, or in the pursuit of the story about them, lends the subject a gravity that belies that dismissive attitude.  There are cautionary tales aplenty here for the unwary or naive who sleepwalk into the darkest recesses of government secrecy and obfuscation.  And in these dangerous times of heightened international tension and conflict, as well as omniscient government intrusion, that warning is as potent as ever.