The title for this book makes a very bold claim indeed.  What exactly constitutes "Proof of Extraterrestrial Intelligence"?  On an individual, subjective level, this book lives up to its billing.  The author encountered a number of extraterrestrial craft over a period of nine months in 1968. Many of the encounters were shared by friends, family and work colleagues.  The witnesses were left in no doubt that they had seen flying objects that had originated from another planet.  So for the witnesses this certainly does constitute 'proof of extraterrestrial intelligence'. Does the same notion apply for anyone picking up the book who is researching UFOs?

The sightings are certainly significant.  They occurred in the year of my birth in rural Florida.  The area in question is near Bithlo, which is between Orlando and Cape Canaveral.  This is important because the UFO activity appeared to be connected with activity at the Cape - notably a launch of a Minuteman Two rocket, and possibly the early Apollo program underway at that time.

On that first incredible night in December 1967, two flying saucers (and this description of the craft is highly apt) appeared in the sky near to the residence of his brother-in-law, whom author was visiting at the time.  They were well lit, were spinning and darting here and there.  They then drifted down to the ground, apparently to land somewhere in the rural outback.

Before long, the skies were subject to a search by military helicopters and jets.

James maintained a vigil through the night after his incredible sighting, and was rewarded in the early hours when he saw one of the craft emerge from its hiding place and carry out its own act of surveillance:

"The flashing red lights that circled the lone ship's outer perimeter moved faster and faster in the 6-5-4-3-2-1, 1-2-3-4-5-6 sequence as it climbed steadily above the dark terrain below.  Then the ship shot straight up, paused, accelerated to a greater height until the celestial vessel's outer structure transformed into a glowing white magnificent craft. 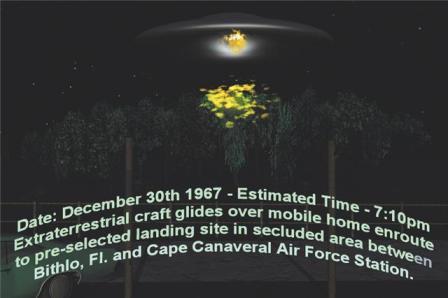 "The bright object shot straight up again, paused, hung in the dark starry sky.  It then accelerated in one final ascending burst of speed, covering a vast distance. As I watched the radiant craft, now star-like in appearance as it hovered from its lofty position - the Eastern horizon exploded with a display of multi-brilliant colors.

"Now, out of the myriad of colors, a fiery object thundered above the cold dark Atlantic Ocean.  The Air Force had launched a Minuteman Two Missile from its underground silo at Cape Canaveral Air Force Station.

"Then the bright craft zipped to the right, zipped to the left, performed a vertical Z-pattern all in one continuous flowing streak of light, against a background alive with a myriad of shimmering, stars (sic).

"The bright object then floated down like a glowing snowflake before it shot to the left, paused, and to my astonishment drew near the cone section of the fast-rising Minuteman Two Missile!  That moment seemed to last forever before the glowing craft darted to the right paused again then streaked off to the south and vanished from eyesight". (pp28-9)

This incredible encounter sparked off a near-obsessive interest in the skies above Florida for the author over the coming months.  It's easy to see why.  He and his relative had witnessed UFOs that hid from the U.S. military, and he then saw one of the craft buzz a missile launch.  What's even more remarkable is that thereafter Jim Oglesby's nightly vigils on his porch, and at vantage points along the roads around his area, were rewarded by a succession of bizarre and notable encounters with UFOs.  Often people would accompany him on his sky-watches, and would be shocked to realise that he had been telling the truth about his nocturnal encounters.

The activity he watched that first night is in keeping with many other UFO incidents involving missile silos and launches down the years.  These have been documented in 'UFOs and Nukes' by Robert Hastings.  The contents of "Proof of Extraterrestrial Intelligence" would sit will within this wider dossier, and I think would then constitute something approaching proof of alien visitation to our planet.  What is striking is that the visits have a purpose - close surveillance of our missile and nuclear activity.

But James Oglesby's account goes a step beyond even this.  There is a multiple-witness observation of a hidden UFO with what looked like a government automobile, leading us to the conclusion that each side was watching the other, and that some kind of clandestine meeting may have taken place.

His own continuing fascination with UFO activity in his area appeared to attract the attention of the UFO occupants themselves.  There was a concerted effort to draw him close to their landed vehicle on a couple of occasion.  For obvious reasons, Jim bottled it and ran for his life!  But in doing so, he realised that he had lost the opportunity to meet with aliens from another world.  This led to his interest in UFO lore, particularly books by the controversial contactee George Adamski.  There are similarities between the two men's accounts, and James Oglesby quotes Adamski and his associate C.A. Honey (who I had the pleasure of corresponding with for many years).  This slots 'Proof of Extraterrestrial Intelligence' into the Contactee camp in Ufology, of which Tim Good is an advocate, and it is unsurprising therefore to see Tim's recommendation on the back cover.  But it is worth bearing in mind that James Oglesby never actually saw or met the inhabitants of the flying saucers he encountered, so we cannot know for sure if they were the 'Nordic' types, or Greys.

It's always difficult to decide whether a book like this would be better written by a UFO researcher (like Tim Good himself) or by the witness.  There is a balance between the integrity of a first hand account and the obvious drawbacks of the author not being a professional writer.  The book could have been put together in a better way.  It jumps about a lot, despite giving the basic structure of a chronologically-ordered account.  It's sometimes difficult to remember which particular encounter the author is referencing in the text, for instance.  Also, the descriptions of the area and road network are detailed, yet I never get a good mental picture of it.  I feel the need to get onto Google Earth to visualise the map in my mind, although the detail given to that rural location by Google is unlikely to be sufficient.  The location is seen in the image to the right, with thanks to the author.

I do think that Mr Good could have made a better job of the book, given the chance, and he would have brought a mainstream publisher to the table too, giving the book a greater prominence.

But saying all that, the substance of the book is what it is all about, and that shines through.  James Oglesby kept a journal of all his encounters, and used this to build up this chronicle, despite the passing of 40 years.  He writes as if it happened the night before, with the same excitement and awe.

That is hard to put across in the third person, and it lends the book considerable merit.  There is also a psychological dimension to this book.  The effect upon the witness is evidently profound.  His behaviour changes as a result of his encounters.  This has an effect on the people in his life too, and this provides further support for the veracity of the sightings.

The author draws conclusions about the activity he has witnessed that a researcher might avoid, and these insights are personal and important.  The behaviour of the objects is intelligently driven - they are not simply lights in the sky - and James Oglesby's interpretations of that intelligently-driven behaviour is of critical importance:  He surmises intent.

I enjoyed reading this book, and would recommend it to anyone interested in the UFO phenomenon.

Addendum: A note from Jim Oglesby about the E.T. occupants:

"The extraterrestrials were not Grays. This book deals with extraterrestrials that operated highly-sophisticated aeroforms back then.  I described three separate craft that operated in the area back then. A cigar-shaped craft, a circular craft and a remote disc or probe or data collector.  If you have read George Adamski's classic Inside the Spaceships, then you will have knowledge of the same three craft that visited the Cape area back then.  Thirteen or so years have elapsed since then, so perhaps all three ship types have been modified...who knows...

"The extraterrestrials that I had an ongoing relationship with from February 13 until September 15 of 1968 used physical craft to come and go into the areas and they used a physical remote disc to communicate with me.  Had I know then what I later came to know, I would have boarded that craft and took the trip but I didn't know anything about the occupants at that time.  I just wasn't ready to make that leap back then.

"The Gray stories and the UFOs that they supposedly travel around in or so nebulous and non-descript that it's hard to define whether their craft were/are physical or astral constructs.  From all that I have read about Grays, (and I have had only one encounter with Grays), their whole demeanor and their impersonal actions from what I had read about them and from the one experience that I had is that they are a very different phenomenon.

"Whitley Strieber lived in fear during his encounters with Grays. The only fear that I ever experienced during my communications with the aliens that I was fortunate enough to spend many nights outside communicating with from their craft was when I was given several opportunities to possibly visit the inside of one of their marvellous ships or better yet take a trip to the Moon and back or some such trip.  If you read Carole Honey's Flying Saucers Fifty Years Later, he identifies Grays as Androids.

"And they may very well be.

"Now, you read "Proof of..." can you imagine Grays, (at least the images of Grays that have been fed to us via media and such) leaving the ship that I observed during two key Apollo Programs and entering the dark sedan and going to the Cape and interacting with whomever?  From all that I have read about Grays, they induce or cause their subjects to emote fear.  The extraterrestrials that I had ongoing communications with back then and continued to have up until 2004, always radiated understanding, a jovialness about themselves, and they never ever projected vibrations or any such emanations that created fear in me towards them.

"I'm writing Book two. Book two begins where Proof of...ends. In that book, I continue my ongoing communications with the ETs and their identity is revealed." (Jim Oglesby, 19/4/09)