Between Now and When 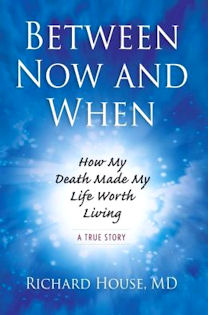 Subtitled "How my Death Made my Life Worth Living: A True Story"

To see the light, one must first traverse darkness.  So it is with this book.  I must admit, the first eighty pages or so I could have gladly missed out, even though it offered helpful background to understand the rest of this highly unusual autobiography.  Then the caterpillar turned into a butterfly, and the whole work lifted to some most quixotic heights.  I use the term quixotic carefully, because in many ways the quest at the centre of this book reminded me of Cervantes' Spanish errant knight's adventures - romanticised, endearing, and often quite mad.

In his early years, Richard House was a rather smug ENT surgeon in California whose underlying neurotic hedonism conflicted with a virtuous belief in doing some good in the world.  Perhaps this conflict was at the core of his alcoholism, which led him to the verge of a traumatic death at the tender age of 33.  The lead-up to the catastrophic oesophageal variceal bleed which almost took him is a cautionary tale indeed.

But it was what occurred subsequently which becomes the core focus of this autobiography.  Somehow, at the very moment of imminent death, the not-so-wise doctor is miraculously saved, and his eyes are opened to a remarkable extra-dimensional reality.  There appears to have been some kind of intervention; an angelic incursion to rob Death of his latest acquisition.  Saved by - and now irregularly in the spiritual presence of - another, Dr House seeks answers to the identity of that divine spirit, and what purpose he is supposed to now serve.  It is a quest (a 'Call of Spirit') which takes him across the globe.

The book is well written, and the various sections of it vary slightly in style with the changing psychological disposition of Dr House.  So, the initial chapters feel ego-centric, and laden with alcohol: fast cars, bikes, parties, drugs.  I didn't feel the love for this guy at all - the vacuous perfection merely irritating.  This quickly turns into an alcoholic 'fear-and-loathing-in-Las-Vegas' style romp as the protagonist nears the gates of his end-stage cirrhotic hell.  Suddenly, the reading is compelling.  From here, we are whisked into a whirlwind of confusing mystical visions and, occasionally, paranormal experiences.

Dr House's scientific objectivity, already slightly undermined by some odd experiences in childhood, is shot to ribbons.  Has the alcohol completely addled his brain?  Everything about his frame of mind and neurological condition yells 'Wernicke's Encephalopathy' to me (I've encountered enough patients with Korsakoff's psychosis in my time as a gastro nurse to recognise the signs).  This diagnosis is also occasionally considered by the doctor himself, when exploring "lingering doubts" (p159) about his own sanity.  But for the most part, he is swept away by the visionary splendour of his new world.   He rather bravely (foolishly?) leaves his old life behind to become an ascetic; initially, on the beautiful Hawaiian island of Kauai (a place which has also touched my soul in years gone by, and I enjoyed a trip down memory lane as he explored the island).  He is fortunate to have some on-going income from his previous medical practice behind him to allow him to pursue his spiritual quest.

At this stage, Richard House is a changed man - humbled, ascetic, sometimes self-absorbed, but open to a great many spiritual experiences, tinged with the odd encounter with serendipity.  He also becomes a lot more likeable, ironically at a time in his life when his family and friendship connections essentially dry up.

His terrible diet (indicative of continuing gastro aftermath) surely won't be helping the developing disease, as the psychosis is further fuelled by unchecked vitamin deficiency.  The encephalopathy and the asceticism feed off each other in a dire downward spiral.  How can the doctor not see this?  He doesn't need a guru so much as a half-decent dietician.

But it is a guru he seeks, eventually in the guise of one Meher Baba.  There is a fascinating section in the book where Dr House seeks information about this great spiritual teacher.  This is in the early eighties, and nothing is available about the man in the Hawaiian libraries, so Dr House must return to the mainland to find a specialist bookshop.  Quite a reminder of how how difficult research could be in the years before the Internet!

His quest takes him first to Australia, then to India, where he begins to feel an ever-stronger connection with his 'captain'.  An epiphany of sorts leads on to the start of lifelong automatic mudras (p209), or severe ataxia depending upon your perspective.  The author believes the mudras to be some kind of essential spiritual work to maintain universal... well, to be honest, I'm not sure what they're supposed to be achieving, because the writing, although still very beautiful in places, gets distinctly muddled in the final sections of the book, as Dr House explores the esoteric borderland of his unstable mind (e.g. "...this visible manifestation of ordered change in non-visible dimensions." (p208)).

He comes to believe in his own central importance in keeping the universe functioning properly, a sure sign of some quite severe mental health issues.  It's a fascinating account to read, perhaps akin to other books like 'My Stroke of Insight' by Dr Jill Bolte Taylor.  But the difference is that, even now, Richard House doesn't seem to realise what this was really all about - he's too immersed in the subjective to see the bigger picture of what he experienced all those years ago.

Continuing his quest, the author travels through London to New York, and then down the east coast of the USA to eventually meet his new partner, who seems to get him back on the straight and narrow some years later (no doubt with some therapy in the form of decent home-cooking).  A happy ending.

I'm not sure if the author worked through travel diaries as he wrote this book.  It certainly feels that way, as he stays true to the mindset that dominated him at each stage.  I'd say he's very lucky to have made it through his quest alive.  His ambition was recognised as barking mad once or twice by his spiritual mentors, who wisely curtailed his activities:  Like Sancho Panza's gentle remonstrations with his chivalrous, but severely misguided master.  Most people whose brains have been damaged by alcohol in this way are barely able to function at all, let alone hack their way around the world practically unscathed (barring the starvation, that is).  It's a testament to this man's inner power that he saw it through.

Repackaging this book with all this in mind would reach a much wider audience, and become a remarkable cautionary tale about alcohol misuse.  Unfortunately, the lingering self-belief in some kind of mystical divine revelation is wide of the mark, I fear, and will limit the book's appeal.  But if you can get past that, this book has a lot to teach us about the inner workings of the encephalopathic mind.

Between Now and When

Between Now And When