and its Reflections in Contemporary Cosmology 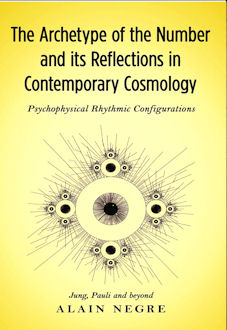 This book provides a heady brew of intellectual thought which cuts across several disciplines.  Predominantly, it is a thesis on cosmology which derives its inspiration from Jungian psychology.  Seemingly, we exist in a psychological universe whose underlying structure is not just numerical, but archetypally numerical.  The title of the book certainly does this justice, even though, let's face it, it is quite a mouthful.

I'm going to attempt to do this work justice in this review.  I may fail to do so.  In mitigation, the author, Alain Negre, is French and has translated this himself into English.  His English is clearly excellent, but a general rule of thumb is that the translator should translate into their native tongue, and not out of it.  So, given the heavily scientific and intellectual nature of this work (quintessentially French, actually), it is no real surprise that the translation is quirky - if not clunky - in places.  That adds an additional barrier for a reader already grappling with modern cosmology, quantum physics, esoteric philosophy and Jungian psychology.  C'est un défi, non?

This interdisciplinary exploration is inspired by an intellectual collaboration between C. G. Jung and Wolfgang Pauli in the early 1950s.  The latter, a Nobel laureate physicist, was interested in different approaches to understanding the universe, but kept these personal explorations to series of letters exchanged with other like-minded scholars, like Jung.  The following extract sums up for me much of what this book is about:

"Reflecting on problems arising from the confrontation of the realms of mind and matter, the two scholars were led to the notion of a field of symmetry where the mind is material and matter spiritual.  This realm is reminiscent of the unus mundus, or 'one world' of medieval philosophers, where what is separated in the manifested world is united on another level of reality... Thus, physics and depth psychology would both lead, in their own ways, to this other level of reality." (p8)

With this underlying philosophical tenet in mind, this book explores the nature and structure of this correlation.  In a similar vein to the hermetic principle "As above, so below", the patterns at the core of cosmology mirror the archetypal processes within the collective unconscious.  The author establishes that the history of the universe can be understood as a pattern of four triads.  These are synchronous with the 12 houses of the zodiac, which, in turn, establish a psychological assimilation of meaning within humans:

"The zodiac may play the role of a symbolic 'interweaver' of events for the improvisational universe.  As a vast web of potential interconnectedness, the zodiac offers the sciences a new light on old scientific problems.  Its symbolic power can push beyond phenomena, initiate new possibilities to grasp the very limits of mathematical formalization, and regain what had been eliminated in the classical conception of intelligibility: the return of the subject, the observer's consciousness, and the subjective and spiritual world of meaning." (p132)

The author looks at how physical and psychological phenomena may be interrelated.  He considers ideas like Roger Penrose's theory of the origin of consciousness.  Quantum reduction in biological systems creates a conscious universe which, given the need for an observer, is essentially the only real universe.  Wave-function reduction events create a "...a primitive kind of 'observation', a moment of 'proto-conscious experience'" (p155).  On a cosmic scale, the various phases of the space-time continuum of the universe can involve similar collapses, on a much grander scale.  The work of physicists like Paola Zizzi, Penrose and Stuart Hameroff edge the author closer to determining that the underlying substance of the universe is mental, as per Arthur Eddington's intuition (p160). The emergence of self-reflective consciousness in humanity is thus a significant phase in the universe's history, perhaps even its raison d'être.

At this point, I hit a snag.  There seems to be an assumption that humanity is the only intelligent life in the universe.  This is a premise that I don't share.  Whether aliens exist or not, the author's argument about the zodiac seems heavily subjective from a human perspective (which perhaps, is his point).  The psychological superposition of meaning placed upon the arrangement of constellations has been essentially fixed for thousands of years, thus giving the impression of permanence.  But, like the emergence of humanity itself, those patterns of stars in the solar neighbourhood change are fleeting within a cosmic timescale.  If other beings in the universe have self-reflective consciousness, and look out at the stars in their skies, they would obviously be very different.  The meanings attached to the constellations they impose upon those patterns would, presumably, also be very different.  Yet, if I understand this thesis properly, the universe, through attempting to understand itself, projects meaning into the sky of those whose mental processes reflect the universe's structure.  Thus, every alien civilisation would need to gaze upon the same structure of zodiacal meaning.  Given that our zodiac (12-13 houses) is based upon the interweaving of the solar and lunar cycles, it seems highly unlikely that similar circumstances would pertain elsewhere, even within a 'improvisational universe'.  The mystery would need to be consistently applied.  On the plus side, at least this would be a disprovable thesis - if we were to ever make contact.

There are a great many other mind-wrenching tangents explored in this book.  There is a very interesting discussion on the nature of time; a comparison of linear time (Chronos) with cyclical time (Aion).  The cyclical nature of things holds with the author's interest in neo-Platonic thought, too, which in turn influences the concept of archetypes.  I particularly enjoyed the early section on how the formulation of scientific theory is biased by embedded philosophical and religious ideas.  So, the concept of the Big Bang sits comfortably with the notion of the universe being created by God, enabling broad acceptance as a scientific principle.

I also really enjoyed the author's engagement with cosmological concepts, the physics behind them, as well as his attempts to draw parallels with other modalities of thinking, like alchemy. The book fluctuates back and forth between conceptual frameworks whose connection was not always transparent from my perspective.  The reader seems implicitly drawn towards making the connections but I often struggled to make significant headway, sometimes feeling that I wasn't quite getting something crucial.  That may have been a lack of understanding on my part, or may have been the result of the quirky phrasing which ran through this translated work.  I felt like an undergraduate sat in a post-graduate class, struggling to catch up.  There are two ways that can go:  Great progress, or feeling lost.  When the astrological aspects of this book began to dominate the discussion, it became the latter.

A reader better versed (or interested in) a deep appreciation of astrology might have made better headway with the astrological symbolism employed.  But, then, would they find the modern physics to be of interest?  This is a very niche book which will appeal to readers who already have a strong grasp of the topics discussed in this review.