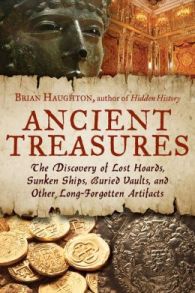 Researcher Brian Haughton has a real knack for creating a very readable narrative from complex, fact-laden stories.  This, his latest offering, takes a forensic look at treasure hoards - their histories, legends and the often dubious human activity that surrounds them, even now...or especially now!   For the 16 famous examples of treasure hoards he examines often remain contentious to this day, for a variety of reasons.  Like the treasure-hunting Pirates of the Caribbean, many of the tales swirling around these treasures involve greed and deceit.  Nowadays, the resultant battles of the High Seas are more likely to be played out in the High Court, but are no less dramatic for that.

Tomb Raiders go back a long way.  The Egyptians went to very considerable lengths to protect the tombs of their royalty, resplendent with the vast wealth that was to accompany them to the after-life.  Mummies were moved from one necropolis to another, ever more secret and remote, especially during times of political or social turmoil.  Perhaps such activities explain why the most famous pyramids appeared to contain no tombs when finally excavated - the Egyptians had simply taken wise precautions and created these immense red herrings to spoil treasure hunters' fun, and give their Pharaohs some well-earned peace.

Eventually, the tombs give up their secrets, and many are considered to come with a hefty price tag for the discoverers, in the form of curses.  Haughton tells the tales of woe, particularly focussing upon the discovery of the tomb of Tutankhamun.  But he keeps his pinches of salt close by.

Throughout the book one senses that Archaeology is often fighting a losing battle against treasure hunters.  By its very nature, looted treasure is bereft of its ancient story, as its location and provenance is (sometimes quite literally) bulldozed through by the clandestine treasure seekers.  As a result, it is often the modern story of the treasures that is most revealing - the international black markets and the interface between them and supposedly respectable buying institutions like museums and top-notch auction houses.  As Haughton moves chronologically through the deposition and recovery of various ancient treasures, it becomes clear that unscrupulous activities are not confined to the modern tomb hunters, some of whom seem part of a veritable nexus of black market crime.  A common theme is the opportunism shown by some of the most prestigious museums in the world.  The Metropolitan Museum of Art in particular has had its fair share of lost court battles over treasures illegally removed from various countries across the globe.

"The retrieval of the Lydian Hoard was a landmark achievement not only for Turkey but for all countries whose history and culture had been damaged by the actions of looters, unscrupulous museums, and the shady dealings of the illegal antiquities trade." (p55)

This problem is particularly bad for Italy, the home of so much cultural heritage - whose northern border with Switzerland seems as porous as the latter's fabled cheese (pp77-8).  On the other hand, there are tales of great heroism involving museums fighting to prevent their treasures being stolen from beneath their curators' noses.  The story of how the Afghani Bactrian Gold was saved from decades of internal conflict in the country is truly inspiring.

The vast sums of money involved lead many treasure hunters and dealers to desperate acts - particularly nefarious in the allegedly murderous case of the Sevso treasure, which Haughton does an impeccable job of piecing together.  But stolen treasures can extend beyond small-time crooks and black market crime, and become the subject of international tensions.  In the case of the Priam treasure, Germany and Russia continue to lock horns at the highest level; just as they once did in darker times over the lost/destroyed Amber Room, a controversy which the author examines in great detail.

The international importance of these treasure hoards is evident in an historical context, too.  The hoards often contain items sourced from across vast empires, or even across continents.  They tell us much about the provenance of exquisitely made goods, and how such high-value products were traded and transported across the ancient world - even during the darker times when the Vikings dominated northern Europe.  It was not just the great ancient empires that inspire the mind in this respect, but also the legends of the Chinese treasure ships (whose claimed dimensions were simply breathtaking), and the logistics involved in the Spanish treasure fleets which crossed the Atlantic to bring Spain such immense wealth in the 16th Century.

The Spanish looting of South America may represent a particularly dark episode in colonial history, but you've got to admire how they managed the flow of gold and silver through the various hazards of hurricanes, privateers, Colonial rivals and Caribbean pirates.  It is perhaps surprising that there are not even more sunken treasures strewn across the sea floor of the Gulf of Mexico, given the many dangers the treasure fleets faced.  Still, the modern salvaging of many of these ships, groaning with gold and silver, provides great stories, as well as highlighting the tensions between underwater archaeology and legitimate treasure hunting companies.

The final dangers discussed in the book involve those faced by the buyers of discovered treasures.  Are these items, new to the market, legitimate, or fake?  The author highlights some particularly famous cases of fake treasure, and how the experts were fooled.  When even the experts are fallible, then the dangers for everyday buyers of treasure from dodgy sources are clear.

This is an excellent book on the subject of buried treasure, covering a great deal of ground in just over 200 pages.  The Bibliography is festooned with websites to go off and explore in more detail.  It's a fascinating read, which has clearly been well researched and presented.  At the end, one is almost inspired to invest in a metal detector!