Ancient Giants of the Americas 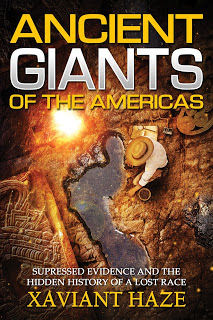 Subtitled "Suppressed Evidence and the Hidden History of a Lost Race"

My exposure to the concept of an ancient giant people in the Americas has been largely peripheral - reading materials that have crossed my path when I've researched the Anunnaki (often depicted as giants in Mesopotamian iconography).  I'll admit to not having been terribly impressed by the disparate shreds of evidence of giant human skeletons depicted here and there on the Internet.  Having read this book, however, I find myself more open to the possibility that among the many indigenous tribes inhabiting both the South and North American continents were 'mighty men of old', ranging from 6' - 8' tall...perhaps taller.

There's certainly plenty of evidence to that end in historical accounts written by the European men who invaded these lands, wiping out so many of the indigenous peoples through war and disease.  This book does an excellent job of pulling all of those accounts together from the four corners of the Americas.  Together, the case seems compelling.

The problem is...there's no smoking gun.  In recent times, Science has realised (dragged kicking and screaming along the way) that there was a plethora of different hominin species at large, surviving until relatively recent times, on the planet.  Extinct human species still kicking around during the last Ice Age included homo floresiensis, Homo neanderthalensis and Denisova hominin.  Only Homo Sapiens remains now, but is it possible that other species, yet to be formally identified, might have survived into historical times?   In the aftermath of the discoveries of other extinct human species, this may no longer seem so unfeasible.  Is it possible that the multiple European accounts of tribes of giants several hundred years ago alluded to just such an extant  human species, now entirely wiped out?

If so, then the evidence for this extinct species still exists - at least, it should do.  One of the recurring themes of the various accounts to have emerged in 19th and 20th centuries, of the discovery of the burial sites of 'giants', is what happened to these remains.  Rather like the final scene from Raiders of the Lost Ark, officials from the Smithsonian Institution would arrive in town, and the giant human remains would be carted off for scientific study, never to be seen again:

"The Smithsonian Institution always seems linked to giant skeletons, especially those that went missing, as most of the turn-of-the-century reports state that the mysterious bones were shipped off to the Institution for further study.  More than a hundred years later we know those bones were never seen again and the Smithsonian continues to deny their existence, as it doesn't fit in with their current teaching models of evolution." (p114)

If this was really the case, then is it reasonable to simply see this as being a question of scientific orthodoxy?      Could other reasons also play a part?  Consider the following:

On their own, these may not be sufficient to justify the alleged institutional cover-up, but taken together perhaps one could envision a general mood among scientists of that time to suppress unwelcome data.

Beyond periodically touching upon some of the above points, the author of 'Ancient Giants of the Americas' does not attempt an in-depth examination as to why coordinated suppression of evidence might have occurred.  His antipathy towards science in general, and evolution in particular (p20) is readily apparent.  He gives little space in the book for counter-argument, or the opposing opinions of scientific sceptics/experts.

However, what Xaviant Haze does achieve admirably is to draw together the available evidence arguing for the existence of ancient giants.  He avoids the merry-go-round of fake news and hoaxes that seem so prevalent on the Internet regarding this topic, instead concentrating on published historical accounts of anomalous sightings and burial sites.

In North America, accounts include the unearthing of burial sites of giants, including from burial mounds in Ohio.  The giant red-haired denizens of these mounds seem to have favoured copper armour, readily available from local mines.  This becomes something of a trademark connection, which the author links to ancient sea-faring and trade between continents.

To the West, a lost tribe of giant Indians was reported by various Spanish explorers, especially  along the Mexican Sonora Coast and, in particular, Tiburon Island.  The local indigenous Seri people has been linked to accounts of 'giant cannibals'  but this may simply be late 19th Century anti-Indian tabloid propaganda.  The author reports that the Seri themselves believed that a race of giants occupied their lands 'before their arrival' (p93).  A pre-Olmec tribe of giants in ancient Mexico is alluded to, known as the Quinametzin - a grouping which allegedly built Teotihuacan (the link between ancient South American monuments and a race of giants becomes a theme for the second half of the book).  Haze also draws a parallel with the tall Karankawa tribe found by European explorers off the Gulf Coast, now extinct.  These disparate groups may be connected, but contact with white explorers early on seems to have removed them from the scene one way or another.

By contrast, towards the tip of South America accounts of another tribal grouping featuring 'giants' emerged, this time known as the 'Ona'.  They occupied the remote Tierra del Fuego area in southern Patagonia and were relative late-comers to the genocidal tendencies of white settlers.  As a result, some photographic evidence is available to back up the earlier tales of giant people living among them.  These are clearly not some kind of separate human species - just regular, but very tall humans.

Can we take from this, then, that there were indeed sporadically-placed groupings of unusually tall indigenous Americans across the continents?  Taking all of the accounts brought together in this book, it seems likely.  It also seems most probable that they weren't so much a 'lost race of giants' than the expression of an exceptional gene-pool - one that white settlers aimed to eradicate at the first opportunity.  It seems likely, too, that these tall people would inevitably become tribal leaders, or powerful warriors, in the same way that tall men are favoured in Western society.  The author alludes to the tall, manly stature of many a tribal leader across North America.  So, there may be little mystery here at all, beyond a realisation that there was a clear agenda to suppress any recognition of superior native size and strength, however unusual it might have been.  That may well have extended to the Smithsonian.  No conspiracy, just rampant supremacist prejudice.

All in all, this was an enjoyable and informative book which managed to avoid some of the more exotic pitfalls which plagues this topic.  Some avoidable typos and poor grammar on display, and some knowledge deficits - including the labelling of Cornwall as 'a seaside town', rather than the well-known English county (p26).  Whoops.  (That then downgrades the current heir to the British throne, The Duke of Cornwall, neatly enhancing Mr Haze's anti-establishment credentials).

Ancient Giants of the Americas