Aliens in my Garden 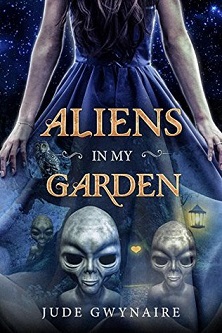 Age-wise, this quirky fantasy novel is aimed at a similar readership to the Harry Potter books, but is perhaps influenced more by Terry Pratchett.  It creatively combines both folklore and Ufology, with protagonists including witches, wizards, goblins, dragons and...aliens. (The astronomer and Ufologist Jacques Vallée would appreciate the connection, I'm sure).  The humour in the book reminds me of Asterix the Gaul, and I tried to imagine  what 'Asterix and the Aliens' would be like.

Set in a world called the Garden, the peaceful coexistence of its fantastic denizens is threatened by the arrival of an alien spaceship in the form of a teacup-shaped craft.  The arriving aliens, known as the Astarians, seem to be as surprised by the bizarre population of this world as the folksy inhabitants are of the intruders.  The intelligent-ish nature of vegetation in the Garden is a particularly curious element of this environment - the village-idiot styling of a local potato is particularly entertaining, but extends up to a living incarnation of the legendary Green Man of English pagan myth.  Rather wonderfully, books are alive:

Changes are clearly afoot in the Garden in the form of some pesky orbs, and darkness quickly emerges from within both camps to destabilise the tentative friendships and alliances that are built up between them.  A darkly steam-punk wizard allies himself with a genocidal Astarian in an attempt to wipe clean the unpalatable mix of misfit life-forms in the garden, drawing upon a Tolkienesque sense of doom about emerging technology and inhuman power destroying the natural environment.

The protagonists are a witch and owl, Alditha and Harper respectively.  There is a sense of Winnie the Pooh here, although it turns out that Alditha is no Christopher Robin.  Instead, she is a gutsy, self-reliant witch with attitude.  Although she has a soft-spot for her dysfunctional but visionary sidekick, she doesn't suffer fools gladly (although she is hyper-protective of her dullard Garden kinfolk). She pragmatically aligns herself with the visitors in the hope of overcoming technological forces which have intruded upon her lands unbidden.  It turns out that one woman's magic is another's science.  Magic and mystery combine to create an enchanting story full of dark, understated humour.  The sardonic wit at large in this novel is very British, combined with rustic dialects and phraseology.  Great fun!

There are covert and overt elements of my own Dark Star theory in these pages.  Like me, the author has been influenced by Zecharia Sitchin's  narrative, but has taken things in a slightly different direction:

Similar to  Battlestar Galactica, the Astarians (read Anunnaki) are wandering the Milky Way in their fleet of spaceships, searching for a new home.  The lost planetary system from which they originated is symbolised by a red star with wings, sometimes combined with a halo of planets (p238).  The author even drops in the name NIB-IRU at one point (p166).  This is all very 'Dark Star', and I appreciated this connection a great deal.  The correlation deepens when it emerges that the visitors are not the first Astarians to visit the Garden.  Thousands of years previously, the Garden was colonised by ancient Astarians, who have since disappeared.  Their beacon had alerted the Astarian fleet to this promising sanctuary, but before it could be duly acted upon, the signals from the ancient colonists abruptly ended, and the inter-dimensional portal linking them to the mother fleet was lost.  This sets the stage for questions about the origins of the Gardenfolk, which create a Sitchinesque allegory.

"The Gardenfolk were beginning to see their history as something intertwined with the Astarians'.  Some people were even starting to vaguely worship the Astarians as their 'creators' at which Alditha rolled her eyes." (p245)

Jude Gwynaire is a great story-teller, combining multiple elements into his fantasy narrative to create a witty, entertaining and enchanting story.  If I had to change anything, it would be the title:  It contains something of a double entendre, nudged gently along by the cover image itself.  Although perhaps unintentional, the nod to the intervention of the ancient gods is pervasive, even in the title! Again, there's a lot of humour in this book, on many levels.  Perhaps "Alditha and the Aliens" would have been safer, but much less fun.

'Aliens in my Garden' has also been carefully manicured by the author.  I found no typos - not a single error within these pages.  That's unusual these days.  I suspect the Audio Book version has been prepared with a similar level of care.

Jude Gwynaire's creative brilliance also extends to music.  He sent a compilation CD along with the book, entitled 'Tales from the Blue Machine', which takes Jean-Michel Jarre off in a prog direction.  He is a talented man, for sure!  I would wholeheartedly recommend his novel to everyone who enjoys a relaxing, fun read which also makes you think.

Aliens In My Garden

Aliens in my Garden