Aliens in Celtic History and Legend: 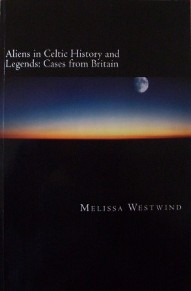 This curious book is self-published through Amazon by a British academic under what I assume is a pseudonym.  I say that because I'm unable to find any further details about Melissa Westwind through word searches, and I can only assume that she wanted to make this controversial thesis available without risking her academic reputation.  As a long-time reader of research proposing ancient alien contact, I delight in obscure and original work that is well-written and balanced in its judgement.  This thought-provoking book fits that mould well, although the evidence set out within is entirely textual rather than archaeological. Westwind's  research therefore bears more resemblance to Zecharia Sitchin's than Erich von Däniken's (both of whom she critiques in her introduction, highlighting the pitfalls of non-expert translations and interpretations of ancient texts).

In the book, Westwind translates various mediaeval texts from the 11th through to the 15th century, mostly from Old Welsh (she holds degrees in Mediaeval British language).  She highlights anomalies within the texts which might allude to contact with others.  The book is well structured, with each text analysed from several angles.  It's inevitable that this careful examination will alienate her readership from one side or the other - academics interested in her translations of old Welsh will no brush through her speculative ideas, and a more general readership interested in alien contact will find the academic fine-tuning somewhat dry.  Nevertheless, the result is that the text holds up to scrutiny and avoids the linguistic pitfalls she charges von Däniken and Sitchin with. 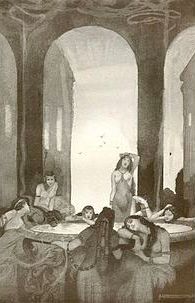 So, did the Celtic people of the mediaeval period really know a thing or to about alien visitors?  Westwind highlights three possible alien groups who might have been in contact.  The denizens of Annwfn (left) are Lords of the Underworld, from a subterranean place somewhere west of Ireland, whose magical realm is accessed via a glass tower. They resemble, perhaps, an early Arthurian version of Sitchin's Anunnaki, confined to an underground base and meddling in human affairs for their own political gain.

Then there are the sky gods -  a second category of aliens known either as the Eingl (angels) or Gwyrda (gentlemen) - the arrival of whose ships precede natural disasters in Britain.  Anglo-Saxon chronicles mention a 'dragon star', and something known as a 'wolcen', which is a cloud-like object.  Either of these might be ancient descriptions of UFOs.

The least established of the three categories textually is the Coranieid, a malevolent group which listens in on humanity like some kind of mediaeval Big Brother, and whose Achilles tendon is exposure to crushed bugs (the particular species of which the author delves into in some depth).  If the Nephilim are the 'Watchers', then the Coranieid are the 'Listeners'. 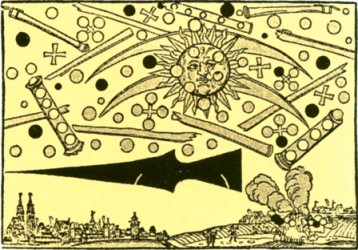 It becomes apparent fairly quickly that the author's knowledge of the ancient texts is more informed than her knowledge of Ufology.  The evidence she cites appears to have more connection with folklore than UFOs and aliens, and would perhaps have been of more interest to Jacques Vallee than Sitchin or von Däniken.

She spends quite some time exploring a tumultuous sound known in old Welsh as a 'twrwf', and wonders whether this might have been technologically advanced aircraft breaking the sound barrier in the Mediaeval skies over Britain.  Well, there are of course plenty of remarkable UFO accounts from the period, for instance the mass sighting of UFO activity over Nuremburg, Germany in 1561 (right).  But the problem here is that UFOs are almost always reported to be completely silent.  Indeed, in many cases it is the lack of sound that is one of their puzzling aspects, particularly when they are moving at speed.  So how does that reconcile with a twrwf?

Similarly, the artifacts cited as being anomalous for the time (like in the 'Preiddeu Annwfn' *, describing the spoils of the Underworld) seem more akin to fabled magic items than modern technology - although I found her description of a fast, self-propelled chariot known in Old Welsh as the linguistic equivalent of 'automobile' fascinating.  She sums up these artifacts thus, rightly recognising their limitations as evidence for extra-terrestrials:

"We have seen various paralysing artefacts, a hamper which replicates food, an invisibility cloak, an automobile and two temperature controlled flasks. But there is no conclusive evidence here... Although the possibility exists that these marvels, especially those repeated and obviously known at an early period, may reflect the amazing technology of a group of space travellers, it is equally possible that these marvels represent human imagination, which has always preceded human endeavour." (p162)

Indeed.  Taking these items together, the imaginative Mediaeval Welsh seem to have more in common with a party of rugby fans in the Millennium Stadium's car park than witnesses of UFO technology.  Which is surely about right?

This question repeatedly rolled around my head when reading this book:   When is it that superstition and imagination in old poems and stories becomes evidence for other-worldly contact?  In the tightly-controlled Christian culture of the time, I suspect that the anomalous aspects of these tales hark back to an earlier, pagan time with its love of the faerie realms, like the Gallic Magonia.  The Celtic peoples no doubt held their old myths quietly to themselves through an oral tradition that avoided the worst of the Church's persecution through the Dark Ages and mediaeval period, and perhaps these esoteric traditions found their way into some of the extant Welsh texts of mediaeval times.  Whether the old stories do indeed describe others is a moot point, as perhaps they do allude to contact from previous generations.  Again, we're into Jacques Vallee's territory here.

But one should also bear in mind that Westwind is by no means strongly advocating an alien solution to these texts.  She simply puts it forward as a possibility to explain strange passages when all other explanations can be reasonably ruled out.  She invites us to consider the prospect of alien contact with the Celtic people of mediaeval Britain, but also lays bare the limitations of her own thesis.  This careful self-doubt allows the book to appear reasoned and insightful, although really I doubt the majority of the evidence she cites has much to do with either UFOs or aliens.  And the rest is so mythical that the facts are surely lost to the mists of time.

But that does not mean that this open-minded academic exploration is not a worthwhile enterprise.  As for my own sphere of research, I would certainly love to learn more about the Welsh 'black planet', which may reference the Dark Star:

"Other poets sometimes refer to a 'planed ddu' (black planet), which seems to be a baleful sign in the sky ..." (p22)

Other researchers may find similar gems in this unusual book.  Given how specialised the subject matter is, the book is reasonably priced, especially via Amazon's Kindle platform.  Typos aside, it's well written and presented, and tentatively adds an obscure assortment of old Welsh texts to the growing ancient alien library.

Aliens in Celtic History and Legends

Aliens in Celtic History and Legends