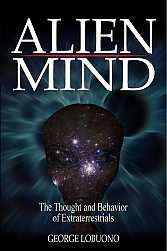 Subtitled "The Thought and Behavior of Extraterrestrials"

I'll start my review by providing an analogy with jazz music.  Say you were interested in fairly mainstream jazz - perhaps Miles Davis.  It's a bit weird for most people's taste, but you like it.  Then you have a go at listening to, say, Allan Holdsworth, or King Crimson.  Suddenly, you are in a different realm of musical existence where your comfort zone of weirdness has spun out into something that may not actually obey any musical rules at all.  That's how I felt, as a seasoned Ufologist, reading 'Alien Mind'.  It's totally hardcore Ufology. It reminded me of being in college, taking regular chemistry undergraduate classes, and suddenly finding myself booked onto the graduate Advance Statistical Mechanics course.  There are two things that are going to happen: Firstly, you're going to find yourself massively out of your depth.  Secondly, if you work hard to keep up, you'll learn a load of new stuff which might open your eyes, and your mind.

'Alien Mind' does not lead you gently in.  It does not introduce Ufology by discussing Kenneth Arnold (God rest his soul) for the umpteenth time.  Instead, it hits you in the face with something called 'quantum cosmology'.  In order to get your head around what is about to be presented, you have to get to grips with a new kind of physics.  Not a new kind of human physics, mind, but a new kind of alien physics.

George Lobuono is a student of alien abductions.  He has delved deeply into the messages brought back to us from the alien visitors/abductors (Alien varieties which include Grays and 'Verdants').  He has derived an understanding of the alien mindset, and technology. He has then explored those clues more deeply, along with other remote viewers, by channelling/ attaining some kind of telepathic contact with a host of alien stakeholders (including aliens named -Xn and -X3), whose interests in the Earth range from nefarious to cosmically benevolent (-ish).  His psychic explorations have provided insight into a quagmire of political positioning, interventions, motivations and ambitions.  Perhaps reassuringly, the resultant alien interest in our planet bears more resemblance to a late night session at the United Nations than to "Independence Day".

Lobuono attempts to unpick the complexity for us.  If his writing lacks clarity then it may be because the material he is dealing with is impossibly complex (perhaps like the Aliens themselves, seen from our more simplistic human viewpoint).  Or it may be that he's just too wrapped up in it all.  At many points in the book I wondered whether he'd lost the plot altogether - certainly, anyone not conversant with 'basic' Ufology picking this book up would think so.  It may be that the structure of understanding of alien intervention discussed here has become a sub-culture of Ufology which I'm not very well aware of.  Reading the book, it seemed that a disparate group of researchers has created between them a vastly complex model of what's going on out there.  The author may simply be one of several writers who have got so involved in their sub-cultural paradigm that they assume other people reading their material understand what they're on about.

Let me give you a quick summary of what I gleaned from the book, as a newbie to all this:

The main alien protagonists are called Verdants, who use psychotronic and faster-than-light communications technology.  They're a bit like the Greys, but not quite the same.  They've controlled the Greys ever since destroying the ecology of the inferior race's homeworld.  They're sexual, not non-sexual (this is important, it materialises).  Their imperial interests stretch across many galaxies, under the aegis of an organisation known as the IFSP, and their environmental credentials are poor because they make use of quantum cosmological energy from black holes.  This degrades the integrity of the galactic energy from wherever they derive the energy, but allows them to use hyperspatial travel, etc.  Our little backwater is one of many projects currently on-going.  They don't invade overtly, but use Fifth Column tactics to infiltrate target primitive worlds. When the primitives mess up their global environment, discover electrogravitics, and inevitably fall foul of galactic laws through testosterone-loaded aggression, then the Verdants step in to mop things up, claiming brownie points for their imperial intervention.

This cagey, piecemeal approach to takeover is necessary because of the hyperversals.  These god-like aliens represent the current generation of a set of species whose ancestry extends back to a 'time' before the Big Bang.  In a cyclical universe, these remarkable beings have discovered a way of surviving the death of the universe, only to pop up into the next cycle to continue their evolutionary development streets ahead of the competition.  Their non-sexual, world-weary nature means that they have a rather more laid-back approach to galactic domination than the Verdants, and keep the blighters in check somewhat.  But they share the same worries about the inevitable local difficulties caused by colliding galaxies, over-used black holes, and so on.  So, they also manoeuvre the Verdants into unseemly acts where the ends justify the means, and lack empathy with their uncouth backwater victims, like Earthlings.  As long as the Verdants keep a low profile in their skullduggery, then the wise old hyperversals are willing to see the Earth exploited for the sake of cosmic peace and progress.

Then there are a bunch of alien bit-players, like Tall Whites, Nordics and Semitics, which crop up in a variety of encounters of the third through the fifth kind.

Forgive me if I haven't quite got this whole scenario nailed down (I feel like I might just pass this Advanced Statistical Mechanics course, rather than ace it).  Lobuono presents this material in a very, very complex manner, albeit with the linguistic competence of an academically-trained writer.  Trying to unravel it all is a bit like a Martian (and after this book I do sorely miss the straightforward concept of a Martian!) trying to understand Earth politics by working its way through all the Wikileaks cables. The following mind-wrenching paragraph will give you a flavour of the sub-cultural jargon, and sheer complexity, at large throughout the book:

"Hyperversals like the Verdant-abetting "three ellipticals" faction secure themselves inside multiple layers of alternate cycle energy, while rationalizing the group-mind shell mentality of offending client states on the outside.  At various junctures while probing "three ellipticals" hyperversals about the Verdant strategy, I've seen how offending regimes essentially trap themselves behind a kind of event horizon without realizing that they do so."  (p154)

If even a tiny fraction of the contents of this book are true, then the consequences for us all are staggering.  I'm impressed by the amount of work and thought that has gone into this book, but the provenance of the information is an issue for me.  As fascinating as the paradigm may be, I remain to be convinced that any of this can be seriously relied upon.