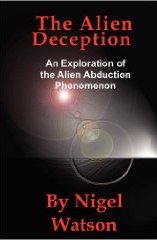 Subtitled: "An Exploration of the Alien Abduction Phenomenon"

I suspect that the author, Nigel Watson, has accumulated a considerable library on the subject of UFOs and alien abductions.  He has clearly been fascinated by the subject for many years, and has previously collaborated with Dr David Clarke on the subject of phantom airships.  His degree in psychology points us in the general direction of his thrust regarding alien abductions.  He is well qualified to lead us through the field of parapsychological research into the phenomenon, which turns out to be more extensive than I had expected.  Nigel Watson presents a considerable bibliography and reference section. Evidently, the academic effort that has gone into producing this work was considerable.  Which makes it all the more strange that the book is fatally flawed through its lack of page numbers, text justification, and basic editing.  It presents like a university thesis that had to be submitted before it was properly finished.

Saying that, the book packs a considerable amount of information into its pages, and is good value for money given its low cover price.  Nigel Watson's analytical style takes us through the superficial presentation of various UFO/abduction cases, and digs around for reasons to be sceptical.  He tackles the extremes of Ufology well, weeding out the whacky and unsubstantial.  But, to my mind at least, he is also overly dismissive of the more substantive cases - he waives aside claims of physical evidence where they appear, or ignores the many good cases in Ufology where considerable credible data has been amassed (particularly from trained observers in the military or police forces).

Tellingly, he only mentions Roswell in passing - casually dismissing it as a myth despite the 600 or so credible witnesses who have come forward to date.  In the realm of abductions, he saves his wrath for the cases where evidence is best - like the independently-witnessed abduction of Linda Napolitano, or the encounter experienced by Betty and Barney Hill (which the author usually identifies as "the Hill's", a consistent grammatical mistake which grates after a while).  He is more charitable to the cases which are evidently non-alien in origin.  This reads like subtle debunking to me - be open-minded about the ridiculous, and come down hard on the good cases.

But there were many fine sections in the book too.  Nigel Watson covers the history of the subject well, particularly pre-1947.  Chapter 7, on 'Fairy Tales', reads like an updated version of Jacques Vallee's excellent 'Passport to Magonia", and although the material included is often derivative, it is informative and well thought out.  There is an excellent overview of aliens in the media, although the spin is to show that the horse came after the cart.  In reality, the inter-relationship between Ufology and the fictional media is a tangled mess. It simply won't do to state that the Hills may have read an obscure sci-fi magazine prior to their famous encounter, and therefore it was all a fantasy built upon cultural exposure.  By that measure, we should all be alien abductees, as there is not a person in the Western Hemisphere who has not been exposed to some aspect of UFO lore through movies, magazines, newspapers and books.  And yet we, as humans, seem to be able to keep our feet on the ground and function in some kind of rational manner.

The suggestion that UFO experiencers are simply suggestible fantasists is only slightly more credible than the author's quite surprising claim early on that the alien abduction phenomenon might have been induced by drugs as part of a government mind-control program (aka MILABS).  With this idea, we enter the world of the paranoid.  As in many derivative offerings, opinion can shift through a book as the author is swayed this way and that by the material he is reviewing.  I doubt that Nigel Watson believes this himself, but for a while (on Page Somewhere - no page numbers or index, remember) he seems to seriously consider it.

I think the best part of the book is towards the end in chapter 10, 'Psychology of Abductions'.  The author is in his element here, and parades the various pet theories held by researchers whose discipline is psychology, or related pursuits.  It's a pick 'n' mix worthy of Woolies.  Such a menagerie of theories enables budding sceptics to allot a theory to any given case. If one doesn't fit, simply make use of another.  Here's a full list, from 'The Alien Deception':

My personal favourite is Ernest Hartmann's boundary theory, which claims that:

"...as our brains develop we categorize our experiences.  These categories establish boundaries between such aspects of our experiences as fantasy and reality, self and non-self, male and female, etc. Biochemical and genetic factors seem to determine how strong or weak these boundaries become. People with weak boundaries are more likely to suffer from nightmares or at its extreme schizophrenia.  They find it difficult to form relationships, reject social norms and have suicidal tendencies.  On the plus side they are likely to be highly creative and work as artists or mental health professionals."

Frankly, you might as well try explaining proneness to alien abduction by star-sign!  A hypothesis like this is an improvement on 'swamp gas', but offers us little in the way of real explanation.

In conclusion, 'The Alien Deception' presents a meta-study of Ufology, and alien abductions in particular.  It is packed full of information and various theories, whilst maintaining a generally sceptical viewpoint towards the entire subject.  Although the content is largely derivative and the layout irritating, it is nevertheless a good read; aimed at a readership with a reasonable background knowledge of the subject and the personalities within Ufology.