Seven Mountains and the Red Star 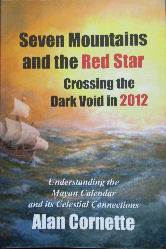 Subtitled "Crossing the Dark Void in 2012"

When you believe in something that most other people in your community believe in, then there is no need to explain it.  A general knowledge of Christian beliefs in the American southern states is a given.  But what if you believe in something completely different?  I have had the pleasure of knowing Al Cornette through our correspondence over the Internet for almost ten years, and he and I share many similar ideas, and beliefs. Neither of us conform to anything approaching normality within our geographical communities.  Like him, I often find it difficult to explain my Sitchinite thinking, and my ideas about a binary solar system to people I come into contact on a day-to-day basis.  Often, I just refer to it as my 'weird stuff' and pull an endearingly quirky face.  They laugh, and we move on to another subject.

Last year, I decided to pack some of my ideas into a novel format, to provide a basis for 'normal' people to get a handle on the Dark Star Theory.  Coincidentally, Al also wrote a book endeavouring to paint a portrait of his equally off-beat ideas for his friends and family.  This artistic analogy is apt, because Al Cornette is also an accomplished painter, and he has decorated the resulting book with many excellent illustrations.  Unlike 'Ezekiel One', Al's book 'Seven Mountains and the Red Star' is not a novel:  It is part autobiographical, part popular science, part prophecy.

It looks at the significance of 2012, and provides a lot of anthropological information about the Ancient Mayans to place the date into context.  Al's treatment of the history - and pre-history - of Central America is personal, and insightful.  He grapples with the date of the start of the current Mayan Age, leading us to the inevitable conclusion that the prior Olmec civilisation was longer-lived than officially recognised, and descended from explorers from Africa.  The date 3114 BCE is close to an asteroid strike in 3123 BCE, as advocated by Velikovsky, who he staunchly defends (p74).  He draws a parallel between the Precession of the Equinoxes and the Mayan Great Year, indicating the obvious longevity of the ancient wisdom.

His anger at the treatment of the indigenous peoples of Meso-America during the Spanish conquest contains a strong emotional punch.  The destruction of the valuable relics and writings of the Aztecs was a deplorable act of vandalism.  We are left with scant clues as to the true meaning of the imminent End of the Age.  The reference to the Seven Mountains and the Red Star from the books of Chilam Balam is one of them:

"Then there shall come the seven mountains, the Red Star, and in the wind swollen sky the house of the storms in the 17 Tun...it is the end of the word of God".  (p139)

It's inclusion in the fragmented Mayan lore is another example of Dark Star symbolism, where the seven mountains are the moons of the reddish sub-brown dwarf that distantly orbits our Sun.  This website is full of such references from diverse cultures.

The inclusion of the Dark Star in this book is significant.  Al Cornette is a long-standing Sitchinite, but he has also been impressed by the revisionist thinking of my Dark Star hypothesis.  Further, he is taken with the ideas expressed by Marshall Masters and his research group, who consider 2012 to be linked to the return of Planet X in some form or another.  Al's interest in 'The Kolbrin' (or Coelbren) finds a soul-mate in his reading of Mother Shipton, and her prophecies.

All in all, Al is greatly concerned about what 2012 holds, and this book appears to be a plea to the people in his life to take the matter seriously.  He successfully presents a complex scenario to readers unfamiliar with much of the source material.  The book reminds me a bit of Bob Frissell's 'Nothing in this Book is True, but it's Exactly how Things are'.  It has that same self-conscious awareness that this sounds bonkers to most people, but on another level makes a whole bunch of sense.

But this is not a pop-vox book.  Al writes with great wisdom, and includes flourishes of highly enjoyable literature:

"The 300 year period between 1550 and 1850 illustrate the destruction of the old cultures of the New World and the beginning of a new global renaissance fueled by the riches of the Americas.  The western world was a windfall - the pot of gold at the end of the rainbow.  Now the pot is nearly empty and the disappearing huge subsidy of timber, minerals, fresh air and clean environment that fueled an entire world economy foretell  of another sense of doom descending upon a culture that, in the past few years, has been steadily retreating to their saviors - the prognosticators of future events." (p135)

Like my own work, Al's writing is eccentric and thought-provoking.  To read more about the book, and how to get hold of your copy, visit Al Cornette's website;

Seven Mountains and the Red Star

'Seven Mountains and the Red Star' is available directly from Al Cornette.

Please e-mail him at velax4000@bellsouth.net