The Alchemy of Self Healing 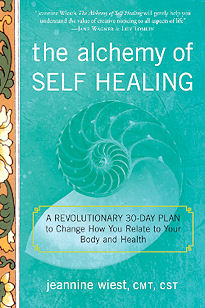 Subtitled: "The Revolutionary 30-Day Plan to Change How you Relate to Your Body and Health"

Context is everything, and I fear that this review is written from the point of view of someone who has a fascination for actual alchemy.  I picked this book out of my review pile hoping that it might be a watered down version of, say, Peter Marshall's "The Philosopher's Stone".  But the title of the book was misleading, at least insofar as the book has nothing to do with alchemy.  Indeed, the only two mentions of alchemy in the book are in the context of a metaphor for transformation (p197) and, incorrectly, an allusion to the German fairy tale Rumpelstiltskin (p57).  No alchemist I'm aware of ever actually attempted to make gold from straw, and to even bring the gold-from-straw thing up made me realise that the author knows nothing of alchemy; neither in its pre-scientific guise, nor its wider esoteric philosophy.

Instead, this self-help book presented a rather off-the-wall method of self-awareness and healing loosely based upon something called CranioSacral Therapy.  To be honest, I've never heard of this at all, and remained none the wiser for quite a long way into the book, because the author (I suppose naturally, given her niche) assumed the reader would already have a good appreciation for what it was.  For the sake of my readers, here's an explanation given by the Upledger Institute (on organisation which is also alluded to many times in the book, with a similar lack of clarity):

"CranioSacral Therapy (CST) is a gentle, hands-on approach that releases tensions deep in the body to relieve pain and dysfunction and improve whole-body health and performance. It was pioneered and developed by Osteopathic Physician John E. Upledger after years of clinical testing and research at Michigan State University where he served as professor of biomechanics. Using a soft touch which is generally no greater than 5 grams – about the weight of a nickel – practitioners release restrictions in the soft tissues that surround the central nervous system."

So... the power of human touch, shock.  Essentially, CST involves massage of key areas of the body to relieve stress, tension and pain.  Here's the thing though - how can that possibly be brought to bear on a self-help book?  The author has her work cut out, it seems.  She presents her own self-help method, incorporating a number of disparate influences very much in the New Age tradition:

"In addition to Upledger Craniosacral Therapy, the influences that have informed the Cranial Alchemy system include concepts I have gleaned from the Four Winds Inka Medicine Wheel as taught by Lynn Berryhill and Tomas Bostrom, as well as creative processes such a those I've adapted from Viola Spolin's theater games, key elements of energy healing work I have studied with animals, sensory musical connections, Reiki practices, and journal explorations." (p29)

To be honest, I found this quirky admixture quite confusing.  There didn't seem to be anything holding them all together.  They were presented as a series of systems to try out during the course of a month of self-reflective practise.  It felt like attending an off-beat conference, and sitting in on a wildly diffuse series of lectures and workshops.  Perhaps, in essence, that's what this book presented - the culmination of the author's favourite bits of the various workshops and seminars she's attended down the years, all thrown into one big melting pot.

Into that pot, I'd also add in a heavy dose of psychotherapy (Wiest's "inner reconnaissance").  Wiest's general deterministic thrust was that much of the body's ills are psychosomatic in origin (some basis in truth, no doubt), stemming from past emotional disturbances which need to be recognised and dealt with.  She argued that we need to listen to what our bodies are trying to tell us - "anchoring the work through the body" - and that such an investigative venture can be facilitated by a number of creative, (some might argue, whacky) methods.

Several of the sections, particularly on Transformational Circles (pp105-110), reminded me of (white) witchcraft, through their reliance upon the serendipitous discovery and collection of natural items in the environment that metaphorically speak directly to us (stones, sticks, etc - a sort of cosmic beachcombing?).  Wiest also seemed to dabble with 'readings' of objects (p157), which crosses the line into the witchcraft zone for many.  Or perhaps she just wished us to spend quality time with the objects around us, like her orange (p121).  All very curious.

Then there were the long sections on horses, including the rather enigmatic "craniosacral protocol for horses" (p111).  So... contact with domesticated animals can be therapeutic, shock.  Add to all of these an understanding of how our ancestors can affect us on a cellular level, feeding into our everyday well-being, and you have a flavour of the disparate nature of this self-help guide.

Throughout, the author illustrated her various methodologies with examples from her own life.  Some of these stories were pretty good, and the tone of the book became quite autobiographical in places.  She has led an interesting life.  But, one couldn't help wondering what troubled the author so much that she felt compelled to undertake such a long, meandering quest through all of these New Age healing approaches.  There were hints along the way, as she opened her heart out about the many issues that had affected her life, and how they had essentially become part of the physical conditions that had ailed her down the years.

Perhaps, in the end, isn't this the most therapeutic method of all?  To talk about stuff, and explore it until it no longer has a hold over you?  For that, you need a second person - the listener (I was reminded of the phrase "A word in your shell-like" (phrases.org.uk meaning) when looking at the front cover of the book).  I felt, as the reader of the book, that I was Jeannine's 'listener', as she tried to get to the bottom of whatever it was that might have caused her body to internalise her strife.  A bit like a friend who goes along to the conference to keep her company, and sits gawping at the weirdness of it all from the sidelines.

Altogether, a curious self-help guide, as unexpected as it was scatty.  But it maintained a light-hearted quality that kept it relatively easy to read, and allowed one to dip momentarily into some rather odd pools of thought.

The Alchemy of Self Healing

Alchemy Of Self Healing